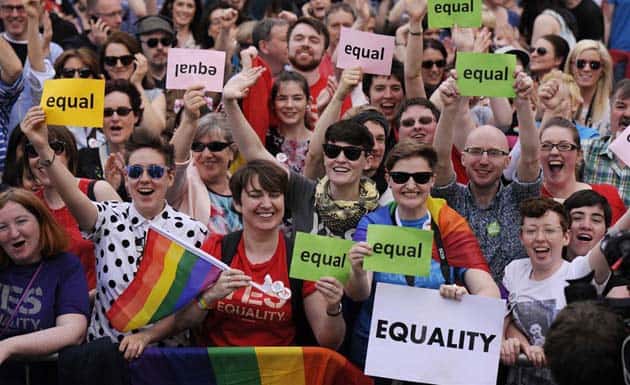 In a historic referendum win, Ireland has become the first country in the world to recognise marriage equality by popular vote.

The 62 per cent Yes vote on 22 May represents a resounding rejection of decades of institutional homophobia.

Across the country in both Dublin and rural Ireland, the Yes vote gained a clear majority on an unprecedented 60.2 per cent voter turnout. The scale of the win reflects a generational shift in social attitudes, with 71 per cent of 18-24 year olds supporting a yes vote.

A campaign of door-to-door canvassing, voter registration and university campaigning mobilised the youth vote, while a “Ring Your Granny” campaign encouraged young people to convince their elderly relatives to vote for equality.

Denied the right to vote from abroad, thousands of young emigrants returned home for the weekend to vote Yes as part of the #hometovote campaign. Since 2009, austerity policies have led to the mass emigration of 270,000 people. But one tweet read, “I’m coming back to help make history. I’m coming back for the future.”

But it was the urban working class vote of Dublin which won the referendum by a landslide. While polling stations in the south-west suburb of Ballyfermot returned an 88 per cent yes vote, in one station in the northern suburb of Finglas it was 100 per cent. The same areas have been the centres of struggle against austerity over the past year.

The Yes win forms part of a wider political rejection of inequality taking hold in working class neighbourhoods. Since September, a mass movement of popular protest against regressive water charges has deepened a crisis of legitimacy for the political establishment.

Efforts by Taoiseach Enda Kenny to “pinkwash” a deeply unpopular austerity agenda using the referendum have failed, with the government parties Fine Gael and Labour polling only 35 per cent combined at the time of the referendum.

According to local councillor and activist Gino Kenny of the People Before Profit Alliance, “Water charges have been the cutting edge of a major movement against austerity and this has really politicised people. The idea of equality has been central to that”.

The referendum represents the culmination of decades of campaigning by the LGBT movement in Ireland, beginning with the first gay rights march led by now Senator David Norris in 1973.

In a state which only decriminalised homosexuality in 1993 and divorce in 1995, the win represents a decisive rejection of the Catholic Church by the Irish working class. Brendan Hoban of the Association of Catholic Priests characterised the result as an “unmitigated disaster” for the Church.

Revelations of church abuse over the past two decades, including the forced confinement of unmarried women to unpaid labour in the Magdalene Laundries, and multiple inquiries into child sex abuse, have weakened the political hold of the Church.

In the weeks leading up to the referendum, the No campaign played the wedge of “children’s rights”, with campaign posters, reading “Children Deserve a Mother and Father”.

In a changing society, in which one in three families no longer fit the heterosexual nuclear family model, the No campaign simultaneously stigmatised lone parent families and all “non-traditional” families in addition to same-sex parents.

While the victory for marriage equality will strike out one form of state-sanctioned homophobia, it marks the beginning and not the end of the fight against LGBT oppression in Ireland. LGBT teachers continue to experience discrimination in Church-run schools.

In the absence of any recognition of transgender identity in Ireland, the current proposed Gender Recognition Bill falls a decade behind the rest of the world. According to the Transgender Equality Network Ireland, “Trans people still face high levels of discrimination and marginalisation”.

The continued criminalisation of abortion in the Irish constitution highlights that the influence of the Church remains far from extinguished. The fight for free and safe abortion, and for a new referendum to repeal the 8th amendment, continues.

The referendum does not extend to the North of Ireland, where the denial of equal marriage rights remains in place with the support of the Unionist parliamentary majority and the nationalist SDLP. Activists in the North have now stepped up their campaign for marriage equality.

The win in Ireland has brought marriage equality back onto the political agenda here. Australian Marriage Equality’s Rodney Croome commented, “if there was ever any doubt that marriage equality was inevitable in Australia, the Irish vote has removed it”. Our politicians now have no excuse to avoid it.