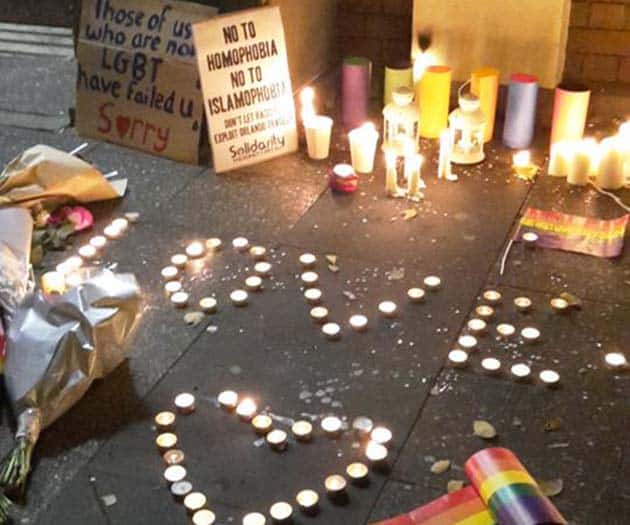 The mass killing at gay club Pulse in Orlando has been felt as an attack on the LGBTI community everywhere. It has been experienced as a very real and extremely personal event. It is a horrific tragedy; the latest episode in a long history of violence against LGBTI people in capitalist society.

Yet just as quickly as the devastating news flowed in, so too did the platitudes from politicians. Politicians that were last week the enemy of LGBTI people are now posing as their best friends.

This is a cynical attempt to manipulate the horror, the grief, and the sympathy for those attacked. We should not let racist politicians exploit this horrible tragedy to deflect attention from the hate crime and their responsibility, so they can further their Islamophobia, their racism, and their wars.

Islamic State has claimed responsibility for the attack. But from what we know about the killer, he acted alone, not under instruction. Though he attributed his acts to IS, he also claimed solidarity with Jabhat Al-Nusra, a group in conflict with IS in Syria. This deeply troubled individual, with a history of domestic violence, seems to have been motivated by prejudice and homophobia.

This hasn’t stopped the likes of Malcolm Turnbull, Hillary Clinton and Donald Trump from turning what is a homophobic hate crime into an incident of terrorism so they can cynically exploit it.

At first, Malcolm Turnbull couldn’t even bring himself to explain that it was an attack on LGBTI people. But when he did later do so, it was in the service of defending Australia’s anti-terror laws and surveillance of Muslims.

He said the attack was about “a hatred of the freedoms … which all of us enjoy”. What about the freedom to marry that he denies LGBTI people? Do young LGBTI people in Australia, after the gutting of Safe Schools, enjoy “freedoms”? What about the LGBTI asylum seekers and refugees he has banished to Manus Island and Nauru?

Turnbull said “we have provided stronger laws to give our agencies the tools they need to keep us safe.” Does he mean the new laws in New South Wales that allow people as young as 14 to be detained for up to two weeks without charge? Encouraging teachers to spy on their students for signs of “radicalisation”? Such laws don’t make us safer, they allow more harassment of Muslims and feed alienation and division.

At the beginning of June, Turnbull spoke at a fundraiser at Cory Bernardi’s Conservative Leadership Foundation—raising money to re-elect this bigot so he can continue his attacks on Muslims, single mothers, abortion rights and LGBTI people.

Such hate has a long pedigree in countries like the US and Australia, where homophobia is pedalled from the top.

As people in Orlando and the US searched for a way to do something to help, many found that Orlando needed blood donations. But the Red Cross does not accept blood from gay men. This outrageous discrimination is one legacy of the anti-gay backlash during the AIDS crisis. Governments looked on as gay men died and refused to provide the resources needed.

Before the 1970s, being gay was a crime and something that could ruin your life. Men were imprisoned, people lost their jobs, some were subject to horrific abuse by the psychiatric profession. It was a mass movement, the Gay Liberation movement, beginning with a riot against police at LGBTI bar Stonewall in New York in 1969, that fought institutional discrimination in the West, and won the rights enjoyed today. Queensland Labor is only now just abolishing unbelievable homophobic laws like the “gay panic defense” and the higher age of consent for gay sex. It is only struggle that has forced some Western politicians to begrudgingly accept LGBTI rights.

Their efforts now to “pinkwash” racism and war-mongering are an insult to those who have fought, and continue to fight, for LGBTI liberation.

In the US, the blood had hardly dried when Hillary Clinton called for more. She said, “we need to redouble our efforts to defend our country from threats at home and abroad … working with allies and partners to go after them wherever they [terrorists] are … hardening our defenses at home”. But it is precisely the Western wars in Afghanistan, Iraq and now the interventions in Libya and Syria, alongside a drone war across all of the Greater Middle East, that generate blowback in the form of terrorism.

The mass killing at Pulse happened at a Latino night. Many of the victims are from Florida’s large Latino community. That didn’t stop Donald Trump—the man who wants to build a fence between Mexico and the United States to keep out migrants from Latin America, and abolish same-sex marriage—from tweeting, “I called it and asked for ban”, referring to his call to ban Muslim immigration to the US. His fellow Republicans, who have spent the election campaign trying to spread the ban on trans people using the bathroom of their choice, and have passed laws allowing businesses to refuse to serve LGBTI people, have also jumped on the anti-Muslim bandwagon.

Meanwhile, groups of right-wing Christians have welcomed the shooting.

It couldn’t be clearer that homophobia is not a Muslim problem or an imported problem in the West.

Nor are mass shootings—this is the 14th of the Obama presidency. There could scarcely be a tragedy more native to the US than such a shooting, carried out with an assault rifle designed by the US military to kill large numbers of people quickly and easily.

Ninety-eight per cent of mass shootings in the US are carried out by white men. Even when they are hate crimes, such as that in Charleston last year when a white supremacist killed nine people in a black church, politicians and the media call them tragedies fuelled by mental illness. Because this attacker is Muslim, with Afghan heritage, the response has been vastly different.

It is encouraging that the Islamophobic narrative has been rejected in many of the grassroots responses to Orlando. One fundraiser, “Muslims United for Victims of Pulse Shooting”, has raised over $50,000 to date.

That is the kind of unity we need in the fight against a common enemy. The same politicians that preside over LGBTI discrimination, whose laws breed the crisis of suicide and self-harm amongst LGBTI young people, are the same politicians who harass Muslims and use Islamophobia to justify their wars. We must stand together, and not let them divide us.