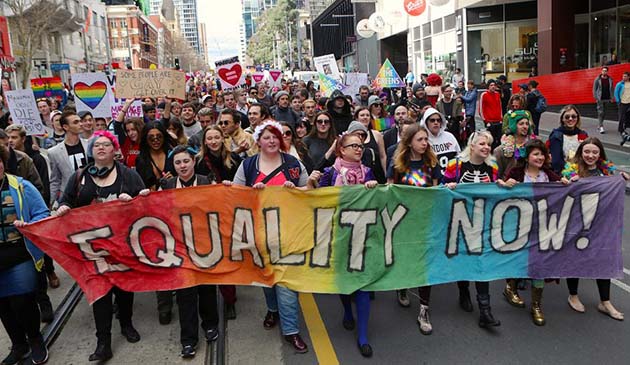 The Liberals’ postal survey on equal marriage is going ahead, after a High Court challenge failed to stop the move.

The growing demand to make equal marriage law has pushed Malcolm Turnbull into a corner, after his endless efforts to delay, appeasing the hard right of his party.

His resort to a postal vote is ridiculous and unnecessary. The whole exercise is homophobic—demanding LGBTI people submit their relationships to a test of public approval. And the fact the whole thing is voluntary, and has to find people at the right postal address, ensures it will produce a distorted and unfair result. A “yes” result is not assured.

But marriage equality’s move to political centre stage has shown again the overwhelming support for it. Enthusiasm for the “yes” campaign saw close to a million people update their address or register to vote before the electoral roll was closed.

A rally of up to 20,000 people in Melbourne, and another of thousands in Canberra, were important demonstrations of solidarity.

Seeing the city filled with rainbows, and hearing the united commitment of the Greens, Labor and the union movement to fight for marriage equality made our side feel strong, and Turnbull and his cabinet of bigots seem like the relics they are.

The “yes” campaign will be most effective if it is an active, visible campaign that involves further large protests and union actions at work, to build enthusiasm and a sense of momentum. We can’t simply rely on door-knocking and TV ads aimed at getting the vote out.

As predicted, the plebiscite has created opportunities for homophobia and transphobia from the right. The Melbourne Equal Love rally chair called on “no” supporters to show respect in their campaign, but as the hateful posters, graffiti, conservative commentary and TV ads have shown, there is nothing respectful about a “no” position.

The “no” campaign’s first TV ad attempted to whip up a moral panic about trans kids and the Safe Schools program, with a parent claiming her son’s school had told him, “he could wear a dress next year if he felt like it”.

The no campaign’s fearmongering that marriage equality will lead to, “the removal of gender from society more broadly” should be exposed as the cover for bigotry and discrimination that it is.

Trans kids exist. The prejudice and transphobia they face has to be confronted. A study released in August revealed that 80 per cent of surveyed young transgender people had self-harmed and 48 per cent had attempted suicide.

Tragically, in their rush to get the “yes” vote out at all cost, the conservative official marriage equality campaign has thrown transgender people and the Safe Schools program under the bus.

In an official counter to the “no” ad, Dr Kerryn Phelps says, “the only kids this will effect are gay kids”, through giving them the right to marry.

The yes campaign could use the surge in support for marriage equality to build momentum for reversing the Coalition’s attacks on Safe Schools, and to further isolate homophobia and transphobia.

Such a response can also open up space to discuss how rigidly enforced, socially constructed gender roles harm everyone.

Instead, GetUp, the Equality Campaign and others want to narrow the campaign to talk simply about the right to marry, and present marriage equality in the conservative framework of modernising family values.

GetUp released another marriage equality ad with a mother talking about voting yes based on her family’s values of “fairness and kindness”, reassuring us that a yes vote has “nothing to do with what these two [her children] learn at school.”

It is right to point out that equal marriage is an issue of equal rights and ending discrimination. But the campaign for marriage equality will be the most effective blow against homophobia and transphobia in general if it takes on the wider bigotry as well.

Even winning the postal vote won’t be the end of the fight for marriage equality. The hard right of the Coalition are demanding wide “religious freedom” exemptions in any equal marriage legislation, so people can discriminate against LGBTI couples and their weddings.

The Catholic Church is talking of sacking anyone working in Catholic schools and institutions who marries their same-sex partner.

The fight for marriage equality needs to be linked with the need to fully implement the Safe Schools program and the fight for full workplace rights for LGBTI people.

We need to galvanise the enthusiasm to fight and make sure that we put the Coalition for Marriage’s worst nightmare, a wider challenge to homophobia, transphobia and gender roles in society, on the agenda.