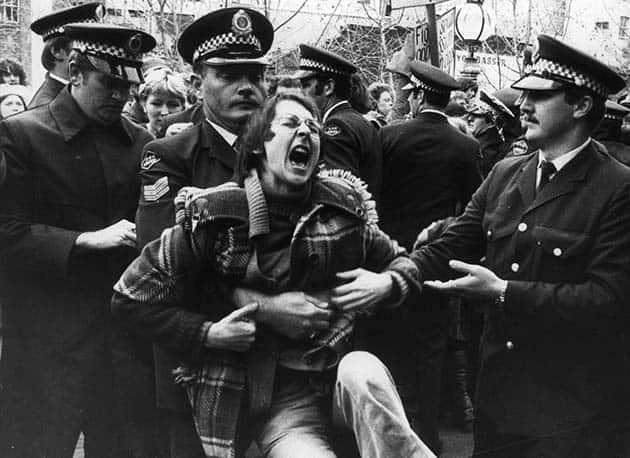 The first Mardi Gras in 1978 was part of a struggle for gay liberation inspired by the radical politics of the 1970s, writes Geraldine Fela

For forty years, the Mardi Gras parade has been a beacon of hope for many people struggling with homophobia and transphobia.

It is an important part of the calendar for many LGBTIQ people living around Australia. Particularly in the decades during and after the AIDS crisis, the outrageous and joyful celebration that is Mardi Gras functioned as an antidote to the horror and death that was wreaking havoc in the community.

In the forty years since the first parade in 1978, however, much of the radical politics that shaped the first Mardi Gras have been left out of the parade.

Today, it is dominated by corporate floats like ANZ and Qantas, and has been a platform politicians like Malcolm Turnbull can use to give themselves progressive cover.

In the last few years the committee that organises Mardi Gras has shown itself to be unashamedly conservative in response to a float organised by Sydney refugee activists “No Pride in Detention”, limiting the numbers able to participate and even threatening to ban the float after some participants heckled politicians.

Yet it is floats like “No Pride in Detention”—not Qantas and ANZ—that represent the spirit and politics of the first Mardi Gras.

The politics of the first Mardi Gras

The first Mardi Gras in June of 1978 was part of a week long program of events organised by the Gay Solidarity Group to commemorate the ninth anniversary of Stonewall, the fierce riots in New York that sparked the gay liberation movement in 1969.

But its history goes further back to the early 1970s and the emergence of the first homosexual rights groups organised by out and proud gays and lesbians.

In 1970, inspired by the emergence of the radical “Gay Liberation Front” in the US, a gay man and a lesbian, John Ware and Christabel Poll, formed Campaign Against Moral Persecution (CAMP) in Sydney. Within a few months the group had branches in most states.

It was known commonly by its acronym CAMP, a play on the word “camp”, a term synonymous with homosexuality at the time. CAMP, however, did not have the radical politics of the Gay Liberation Front in America.

In many ways it operated as a social group, a way of connecting gays and lesbians, particularly through its newspaper “camp ink”. In Melbourne, members were afraid that even the term “camp” was too recognisably gay, and adopted the name “society five” in 1971.

However, in 1972 there was a split in CAMP and “Gay Liberation” emerged in Sydney. Similar groups then spread across the country.

Gay Liberation was inspired by the student struggles occurring around the world, the campaign against the Vietnam War, the black power movement and women’s liberation. It was committed to radical, anti-capitalist politics and militant tactics.

Gay liberation had its roots in the radical left. Many of its leaders were Trotskyists and members of the Communist Party. These activists identified the roots of homophobia not in individual prejudice and discriminatory acts, but as products of broader structures of oppression, in the nuclear family and the capitalist system itself.

The gay liberation movement saw marriage and the nuclear family for what it is, a broken institution that oppresses women and limits our sexual and gender expression to roles that stunt our human potential. It exists to provide unpaid labour for capitalism, reproduction and nurturing the next generation of workers to fill the call-centres, universities, and office buildings.

These activists believed that for gay oppression to be eradicated, society had to be transformed completely.

In the words of the Melbourne branch of Gay Liberation, they were fighting for, “a new society, open and sex-role free”.

The goal was for a kind of liberation that won genuine freedom, freedom from oppressive gender expectations and sex roles for all people, gay or straight, and recognition that human sexuality and personal expression is extraordinarily diverse and should be celebrated as such.

The open, proud and defiant politics of gay liberation challenged homophobia by holding marches and sit-ins. They kicked off the decades long struggle to decriminalise homosexuality that didn’t end until the 1990s.

They forged links with other oppressed groups from Aboriginal people struggling for land rights to the women’s liberation movement.

This was the politics that set the stage for Sydney’s first Mardi Gras in 1978.

What happened on the day?

The morning of Mardi Gras there was a protest march up Oxford Street. But the Mardi Gras parade was meant to be something different. It was organised as a street festival, a night time parade down Oxford Street. This wasn’t just for fun, though it was hoped that it might be! There was also a political rationale.

The gay liberation movement in Australia had struggled to bring a large section of the gay community into its fold.

There were a large number of men, many of them closeted, who lacked the confidence to join the visible and loud movement, preferring the anonymity of the bars and beats.

It was hoped that a street parade might blur the line between demonstration and party, as the costumes and music of the Mardi Gras snaked up Oxford Street, calling these so-called “bar-flies” out of the gay bars that lined the strip, to join them on the streets.

And it worked—hundreds of people poured out of the bars to join the parade.

However, tensions soon arose. As the march approached Hyde Park, police denied them access to the park and confiscated the sound system.

Confused, the marchers dispersed and made their back up the march route, gravitating towards Kings Cross, the historic centre of gay life and culture.

In the centre of Kings Cross, at the El Alamein fountain, the police closed in. One organiser recalled that it was at this point that the police, “came out in violence… openly bashing people”. Police violence was routine for many of those marching. Gay men were routinely beaten, sometimes killed, when they used beats. Lesbians and trans people were harassed constantly in bars and on the streets.

But this time, they weren’t going to take it. Peter Murphy, a gay liberationist and member of the Communist Party recalled that, “It was a police riot, and the poofters and dykes were fighting back… Garbage and garbage bins were flying. I had never seen anything like it, and neither had the police.”

Fifty three people were arrested that night and held in the Darlinghurst police station. The police targeted the leftist organisers of the parade. Peter Murphy was taken deep into the station and severely beaten.

The Saturday following, a mass meeting was called to initiate a campaign to drop the charges. Two thousand people marched at a rally called on 15 July 1978. In an act of defiance, they re-traced the route taken on the night of the arrests.

At the time, this was the largest gay rights demonstration in Australian history. The demonstration had two demands: They wanted the charges from Mardi Gras dropped and also the right to march.

Many who had been arrested at Mardi Gras had been charged with taking part in an illegal procession. This related to a broader civil rights concern over the unpopular Summary Offences Act, which had been used by the NSW police to stop protests in the past.

Gays and straights demonstrated together, joined by modest contingents from trade unions and the Labor Party.

The campaign to drop the charges was successful, with most of the charges from the Mardi Gras arrests dropped and the Summary Offences Act repealed in 1979.

The campaign won the right to march for everyone.

Fighting for our rights today

We can expect that Mardi Gras this year will be a double celebration. It is both the 40th Anniversary and also the first Mardi Gras since the legislation of marriage equality.

In most states the fight for the Safe Schools program continues. Many LGBTIQ people still feel the need to hide their sexuality and gender identity at work, in schools and in their families. Trans people in particular live with the constant threat of violence.

The marriage equality campaign missed an important opportunity to take on the bigots in the No campaign, and to defend Safe Schools and trans rights. They ducked these “hard” questions, insisting that marriage equality was simply a matter of “fairness”.

But the rights of trans people to transition and for schools to discuss sexuality and gender identity openly should not be “hard” questions in a campaign for equal rights.

To really beat back homophobia and transphobia, we need to take inspiration from the radical politics behind the first Mardi Gras. That means struggling against oppression and discrimination wherever it rears its ugly head and fighting for a better world in which the true diversity of human sexuality and self-expression can flourish.

Graham Carbery, A history of the Sydney Gay and Lesbian Mardi Gras, 1995.

Graham Willett, Living Out Loud: A history of gay and lesbian activism in Australia, 2000.