Whitlam’s legacy and the death of social democracy 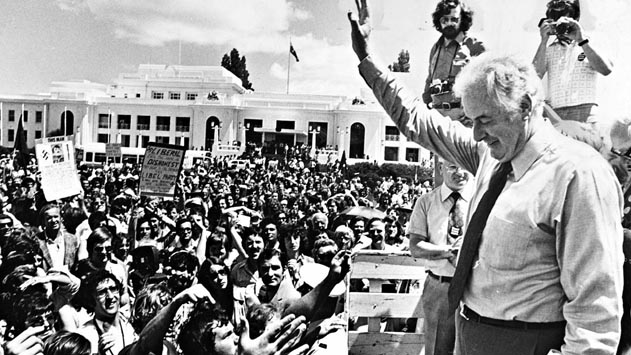 Following the show of continuing adoration for Gough Whitlam at his packed out memorial, Jean Parker reflects on his contradictory legacy

The flood of sentiment following Whitlam’s death should be read as a testament to the depth, and resilience, of anti-neoliberal politics in Australian society.

Over time Gough has become the quintessential symbol of a time when the Labor Party stood for free education, for universal healthcare, for Land Rights, for the replacement of White Australia with multiculturalism, for ending the war in Vietnam, and for the unashamed building of the public sector. Those mourning Gough are yearning for a political era when Australian society seemed to be becoming more just, more equal and less racist.

For many Whitlam shines so bright precisely because in the decades since his dismissal in 1975 Labor has consistently repudiated the Whitlam government, and in power has trashed its reforms. This brings us to the point where in the mainstream politics today, there is bi-partisan support for cuts to balance the budget, more markets in the universities, the assimilationist NT Intervention, bombing Iraq and closing our borders to refugees.

It is remarkable that despite the invisibility of a genuine social democratic agenda in parliament, its support among the mass of people is alive and kicking, as the response to Whitlam’s death has again illustrated. But the nostalgic mourning of the past month does nothing to bring this politics back to life, nor to defeat the new round of neo-liberal counter-reforms embodied in Abbott’s budget.

What’s more, nostalgia disguises the real legacy of Whitlam’s time in power, a legacy that contains the seeds for Labor’s shift to the right under Hawke and Keating. Understanding the fundamental limits of Whitlam’s politics is therefore necessary to reverse the corrosive impact of Labor’s capitulation to neo-liberalism.

A sober assessment of the Whitlam years must start by recognising that Gough played virtually no role in creating the wave of radicalisation that brought him to power and opened the way to the passage of his key reforms.

Those who made it “time” for Whitlam’s election in 1972 were not the ones sitting in parliament. As Howard Zinn would have it, they were the ones sitting-in, occupying parliament’s lawns with tents, and its streets with striking workers and students.

They were the workers who, in increasing numbers in the last years of the 1960s, struck for wage rises as thirty years of economic growth fed into a wave of worker militancy; the socialists in the unions who prepared to break the anti-union “penal powers” by striking for jailed union leader Clarrie O’Shea in 1969; the Gurindji stockmen who walked off Wave Hill station in 1966 and sat down for their land, winning the support of workers across the country; the three women who chained themselves to the doors of the Arbitration Commission in 1969 demanding equal pay; the anti-war activists who campaigned for Labor’s Arthur Calwell in 1966, and then when Labor lost realised the need to take direct action against the Vietnam war by organising hundreds of thousands to strike against the war, by hiding draft resisters and by raising money for the Vietnamese National Liberation Front. They were the black activists who set up the Aboriginal Tent Embassy outside Parliament House demanding national land rights.

It was these struggles in the 1960s and early 1970s that shifted society to the left and laid the basis of reforms like Medibank, Land Rights, no-fault divorce and the withdrawal from Vietnam. It is the policies that are remembered today, not the struggles that made them possible.

The reforms, and the significant new social programs that Whitlam’s government initiated and funded in its first years in office, did make real improvements to people’s lives. They should be celebrated and defended.

But while Whitlam was willing and able to bring in this suite of changes, he was unable to defend them. Nor can this be explained by the right-wing assault represented by the 1975 Kerr dismissal. What’s largely overlooked today is that from late 1974 Whitlam explicitly froze his reform agenda, and spent much of 1975 trying to reign in spending. In truth the dismissal interrupted a drastic back-peddling from Whitlam, and probably saved Gough’s legacy.

When Whitlam came to power in 1972, Australia, along with the rest of the developed world, had lived through 30 years of economic growth. The post-war boom was the political and economic status quo.

On coming to power after 23 years of Conservative rule, Labor assumed that it would preside over an economy that would continue to grow at 6-7 per cent a year—just as their predecessors had. The global Keynesian consensus preached that Keynes’s economic policy tools had ended the booms and busts that had characterised capitalism’s history.

Whitlam had been consistently explicit that his programs relied on this strong level of private sector growth. Few imagined that the boom could end. In his first budget in 1973 Whitlam increased spending by 40 per cent. He doubled education spending, tripled urban development and quadrupled public housing funding. But even after this, the budget was still $211 million in surplus!

In 1974, however, the global “stagflation” crisis hit Australia. The economic conditions that Whitlam’s reform program relied on dissolved. Inflation rose to 22 per cent, unemployment (which had been statistically negligible) suddenly hit 5 per cent. Profit-rates plunged, and bosses panicked.

It was the panic created by the first deep crisis in a generation that underpinned the hysterical rejection of Whitlam by key sections of the ruling class and the media. As workers took strike action at record levels, capitalists wanted immediate action against unions, and were prepared to break parliamentary rules to get it.

But it was the way the Labor government responded to the crisis that is key. Labor Left leader Jim Cairns, famous for his role in the anti-Vietnam moratorium movement, was treasurer. Initially his response to the crisis was that it presented the chance to enlarge the size of the state in relation to private industry. He argued that the government’s reform program must continue, and that it was better to go down fighting than to surrender Labor’s agenda.

This instinct was right. But to be implemented it would have required the mobilisation a militant union fight against the stockbrokers and bankers—fighting the sackings with occupations and nationalisations, organising mass strikes in support of the government’s legislation, meeting the media barons’ relentless propaganda with workers’ power.

But even the most progressive Labor government in Australian history, supported by a highly organised union movement and mass social movements, had absolutely no intention of implementing such a strategy. To do so would have been to abandon Labor’s commitment to parliament and to running capitalism.

Instead Labor moved sharply to the right. Its first priority became fixing the economy. Cairns argued, “We live in a society where the determinants, the things that happen in society as a whole are taking place in the private sector…If we’re to keep people in work or get them back to work, we have to work on the private sector.” Working on the private sector meant getting profit-rates back up, and so Labor committed itself to ensuring a, “reasonable rate of return on investment”. This meant trying to contain strikes, holding wages down, and freezing public spending. By the May 1975 budget Cairns declared that he was, “planning to get the domestic deficit down to the lowest possible figure”.

In the face of the new economic turbulence that would characterise the coming neo-liberal decades, Whitlam’s Labor established the idea that reforms in the interests of workers, women, Aboriginal people and the poor could only come once the economy was healthy, and bosses were getting the returns they wanted on their investments.

This is the lesson that Hawke and Keating took from the Whitlam government and the logic that led them to reduce company tax from 46 per cent to 36 per cent, to corporatise and eventually sell-off parts of Australia’s welfare state, and to implement an Accord that was more successful in shifting wealth to capitalists than any policy in the previous 50 years.

Whitlam failed to mobilise the social forces that brought him to power, and instead set about trying to win back the support of the ruling class and their newspapers.

This doomed strategy explains both the back-peddling on social programs, and the failure of the government to defend itself from the powers on display in the 1975 dismissal.

Ultimately, real power is not in parliament. The powers stacked against Labor in 1975—capitalist crisis, a hostile press, and bosses that wanted their profits restored—were quite willing to dispense with parliamentary democracy when it suited them.

This is how the system actually runs. Labor rode into office on the momentum created on the streets and used parliament to implement some progressive reforms. But it was not able to both defend these reforms and manage the bosses’ economy. Labor chose the economy.