Wage cuts and bailouts: Labor and the Great Depression

In the face of the Great Depression in the 1930s, Labor turned on its working class supporters in order to bail out capitalism. Jean Parker looks at the lessons for today

When Australia’s deepest ever economic crisis hit, in the 1930s, workers looked to a Labor government to halt the employers’ wage cuts and to reduce unemployment. But the Scullin Labor government betrayed them, slashing government spending in order to repay debts to the banks.

The Labor government of James Scullin came to power in the largest landslide victory Labor had known to that time.

It defeated the Bruce-Page coalition government, which was hated for its naked pro-business agenda. At every point Prime Minister Stanley Bruce had mobilised the forces of the state—the government, courts and police—against workers and ignored illegal activity by the bosses.

Industrial judges appointed by Bruce handed down an award cutting timber workers wages while increasing their working hours. When workers protested in Sydney union leaders were arrested and prosecuted.

However it was a different story when coal mining bosses in the Hunter Valley ignored the law and slashed workers’ wages. When workers went on strike the bosses locked them out (just like Qantas CEO Alan Joyce did when he grounded his fleet last year). The Bruce government sat by and did nothing. It was one law for the rich and another for workers.

Ted Theodore, who was to become treasurer in Scullin’s government, campaigned around the promise that, if elected, Labor would have the miners back at work within two weeks on the workers’ terms.
Labor swept the floor at the polls and Bruce lost his seat, in a stunning humiliation not repeated until Howard’s loss in Bennelong in 2007. When Scullin and other victorious Labor MPs boarded the train in Melbourne to travel to Canberra crowds flocked to wave and cheer at every stop. Bruce’s MPs reported with disgust that “The Red Flag” was being sung at the hotels in Canberra where Scullin’s cabinet gathered.

But once PM, all Scullin did for the miners—after eight months locked out—was offer to mediate talks between the unions and the mine owners.

Talks failed when the bosses refused to open the mines unless the workers accepted the wage reductions. Some Labor ministers urged Scullin to take over the mines through nationalisation, but he dismissed this as “unconstitutional”.

In the Hunter Valley, where union families on the verge of starvation had raised money to get Scullin elected, there was fury. Local Labor MP Rowley James, a former miner, said that his electorate had collected campaign funds “practically on false pretenses” and argued that Scullin should seize the mines, even if the High Court later ruled against the nationalisation, saying, “Far better… to die fighting than to go down without a fight.”

The NSW Nationalist government was less timid. They were prepared to re-open the mines by force—to install a scab workforce and break the union. On December 16, 1929 they sent police in against the strikers at the Rothbury Colliery, killing a worker—28 year-old Norman Brown. The mine workers were forced to accept the wage cuts.

But this was only a taste of the tragedy Scullin was prepared to inflict on the working class as a whole in the Depression. 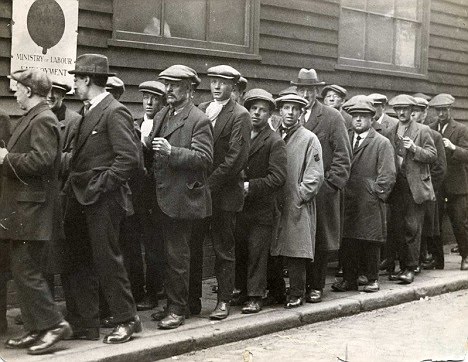 Depression hits
Scullin took the reins on October 22, 1929. Two days later the US stock market lost 11 per cent of its value in “black Thursday”. The Great Depression had begun.

One immediate remnant of the Bruce government was Sir Robert Gibson, chairman of the Commonwealth Bank board. Gibson was an orthodox economic conservative, and responsible for providing the government budget funds and managing its debts.

In his first days as Prime Minister Scullin took briefings from Gibson, who argued that the government must cut spending to meet the growing debt repayments to British banks.

The unelected Commonwealth Bank chair and the baying of the employers for wage cuts were to be of more influence over Scullin than the millions who had swept him into office.

The Great Depression hit Australia hard. The economy had boomed in the 1920s, leading the government to borrow in order to expand infrastructure, as Australian companies supplied seemingly inexhuastable overseas markets for wool, wheat and minerals.

Just as in Europe today, although the Depression began in the private sector with a 45 per cent drop in the prices paid for Australian exports, it soon posed problems for the government in repaying its debts. The Depression not only drove up unemployment, but reduced the tax income from which the government paid state employees and repaid its loans. At the same time the government’s capacity to borrow was eliminated by a “credit crunch” as banks became too scared to make new loans.

Scullin was faced with a choice—default on the debts and use government funds to keep people employed and fed, or cut spending, pay the debt and allow workers to starve.

On the advice of Robert Gibson, Scullin invited the British banker Sir Otto Niemeyer to travel to Australia to advise the Labor government on how to deal with the crisis.

Niemeyer’s solution, like that being imposed on Greece by the IMF and the EU, was to slash wages and ensure debt repayment. Or as the Labor Party paper Australian Worker interpreted it: “the workers of Australia must eat cheaper food and wear shabbier clothes, and give up their few pleasures in order that Britain’s wealthiest loafers may… wallow still more grossly in sybaritic excess”.

In 1931 Scullin oversaw what became known as “The Premiers’ Plan”—an agreement with the state governments to cut public spending by 20 per cent. The cuts meant slashing pensions, unemployment payments and public sector wages.

The depth of deprivation and suffering was enormous. With a third of people out of work thousands of families were evicted from their homes and forced into shacks in the previously Aboriginal shanty-town settlements like that at La Perouse in Sydney. A wave of young men swarmed into the bush in the vain hope of work. People sold beds and slept on cardboard and children starved.

Managing capitalism
Scullin’s decision to put bank profits above the lives of those who elected him reveals something fundamental about the Labor Party’s politics. The party has always accepted the rules of capitalism, and sought to work within the system for its gradual reform and humanisation.

But such reforms are only possible in the context of a profitable and healthy economy. Scullin’s recipe for improving living standards rested entirely on the need for economic growth in the private sector. When the private sector breaks down—as it well and truly did in the 1930s—then Labor’s task as Scullin saw it was to nurse it back to health.

Faced with economic crisis, Scullin believed that workers had no option but to tighten their belts and wait for profits to recover.

Scullin’s only aim became preserving the future success of Australian capitalism. He was convinced that if Australia failed to repay the banks then it would lose its ability to borrow in the future and any prospects for future growth.

If this meant starvation for many workers—which it did—then so be it. The prescriptions of the Commonwealth Bank and Otto Niemeyer meant workers paying for a crisis that the rich had created. Yet Scullin endorsed and implemented their austerity plans.

Since the Hawke and Keating era we have become all too familiar with Labor governments who oversee falling living standards for workers. Since the end of the post-war boom in the mid-1970s, the Labor Party has abandoned any serious aspirations towards using the state to eradicate inequality or protect workers from unemployment or wage cuts.

Instead Labor aims to ensure the health of capitalism—accepting that this means imposing longer working hours and labour “flexibility”. In 2005 former ALP leader Kim Beazley bragged that in the Hawke and Keating years, “we basically slowed wage growth so that we could raise corporate profits by a whopping 5 percentage points of GDP.”

Keating and Hawke’s neo-liberalism was accepted without serious opposition from inside the Labor Party. In contrast, Scullin’s attacks faced opposition from the highest ranks of the party and led to a major split.

Opposition to Scullin cohered around a rival economic program presented by NSW Labor Premier Jack Lang. In the 1930 NSW state election Lang campaigned against Scullin’s austerity plan for a 10 per cent cut in the minimum wage—and won.

The depth of opposition to Scullin’s austerity measures within parliamentary Labor itself can be seen by the fact that half the Labor MP’s voted against the Premier’s Plan, and two of Scullin’s ministers resigned over it.

But even this was not enough to persuade Scullin to abandon plans to balance the budget. In fact Scullin was ultimately prepared to bring down his own government over the debt issue.

Jack Lang proposed suspending interest payments on Australia’s debts. This was timid compared to the calls to drop the debt entirely coming from other sections of Labor.

But Scullin saw it as a mortal threat to Australian capitalism. He responded by effectively expelling the NSW branch from the Labor Party. This left Scullin in a minority government, which would soon fall.

The Depression exposes how far a Labor government will go in sacrificing the living standards of ordinary workers, and even its own electoral survival, to be responsible managers of the system.