UTS stands up to Islamophobic attacks 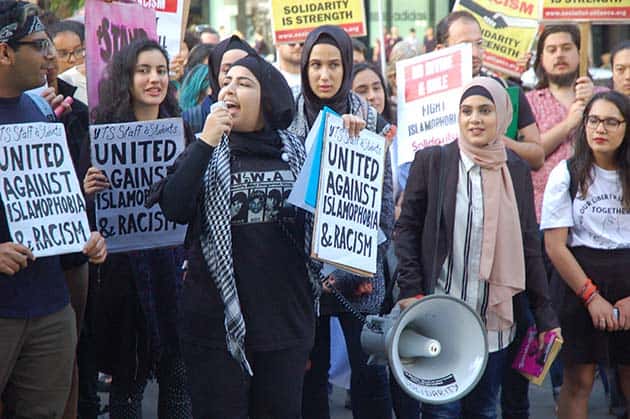 Over 150 students and staff gathered at UTS in Sydney on 23 May to protest and condemn a series of targeted Islamophobic attacks.

Students and staff spoke out and marched to the site of one of the attacks, chalking messages of “welcome” and “no to Islamophobia” to reclaim the campus.

Aishah Ali, a member of the UTS Muslim Society spoke at the rally and commented that, “To have a diverse group of students unify in solidarity for a common initiative shows great strength and acceptance for the Muslim female community, but it monumentally enhances our lived experience on campus.”

On 11 May, four women wearing the hijab were assaulted in a series of unprovoked Islamophobic attacks by a 39-year-old journalism student. Four women who expected to be able to walk safely to university became victims of a hate crime. In response, the university put up a Facebook statement proclaiming that they had provided counselling sessions for people who had been subject to this vile act of racism.

The rally was organised by members of the NTEU at UTS and student activists including members of Solidarity.

Kais Al Momani, one of the academics who spoke, witnessed the attacks and helped facilitate meetings between the students and staff.

UTS likes to pride itself on its support for social justice and diversity, running a “Racism it stops with me” campaign through its Equity and Diversity Unit.

Verity Firth, head of the unit, told the rally, “We are determined to create a campus culture of inclusion and acceptance”.

But the pressure it puts on its staff, 78 per cent of them on casual or fixed term contracts, is at odds with allowing them the time to properly create such a culture on campus. UTS is at the forefront of attacks on education with its recent introduction of trimesters.

Nor is action on campus enough to get to the root cause of such racism. These attacks are not anomalies, and are the result of racism which comes from the top of society, trickles down and festers, breeding xenophobia.

The “fear” of Muslims is manufactured by continual scaremongering about terrorism from the government and the media. Their racism gives confidence to individual bigots to carry out such attacks. This needs to be acknowledged if we are to try and end islamophobia and racism in all its forms.

The rally at UTS showed how to respond both to individual racist attacks and the wider climate of Islamophobia—bringing together people from across society, united against racism.