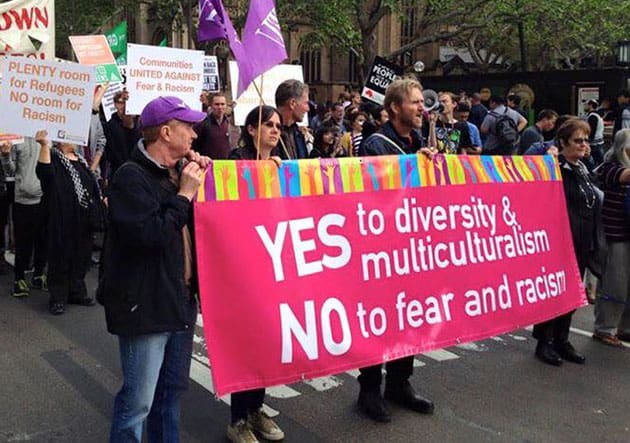 The campaign against the Grand Mufti and the National Imams Council following their statement on the Paris terror attacks has shown that some politicians and the Murdoch press are determined to continue to stir up racism against the Muslim community.

Immigration Minister Peter Dutton’s decision to “condemn” the Mufti’s comments, and his claim that the Mufti needed to “make it very clear that he condemns these acts of terrorism”, were nothing more than an attempt to suggest that the Mufti, as the leading spokesperson for Muslims in Australia is a supporter of terrorism. Yet the Mufti’s statement on the Paris attacks and many previous statements make clear his strong condemnation of terrorism.

The constant calls by politicians for ‘moderate Muslims’ to oppose extremism is just another attempt to cast suspicion over all Muslims.

The Mufti has done nothing but tell the truth; that “causative factors such as racism, Islamophobia, curtailing freedoms through securitisation, duplicitous foreign policies and military intervention” are indeed issues feeding domestic terrorist attacks.

The Assistant Minister for Multiculturalism Concetta Fierravanti-Wells insisted that the Mufti should “leave aside those sort of more controversial concerns”. Social Services Minister Christian Porter said it was “outlandish” and not “very constructive or helpful”.

The government is trying to demonise the Mufti, while pursuing domestic and international policies that are the fundamental causes of terror attacks.

There is nothing outlandish in saying that governments should address the causes of terrorism, instead of inflaming Islamophobia and passing more draconian anti-terror laws, attacks on citizenship and giving more powers to ASIO and the police forces to put Muslim communities under increased surveillance.

In the aftermath of the Paris killings, the Treasurer, Scott Morrison has repeated his claim that the majority of the 12,000 places Australia has created for Syrian refugees will be taken by Christians. The government’s policy discriminates against single men and Muslims, but Immigration Minister, Peter Dutton, says Morrison’s comments are “in line with government policy”.

Yet, the death and destruction caused by Western foreign policies in the Middle East have generated legitimate opposition all across the world.

Over 750,000 people across Australia marched against the Iraq War in 2003, among millions of others worldwide. At the time many people pointed out that it would only increase terrorism and instability. This has been proven right. That war led to the death of one million Iraqis, and created the circumstances where a murderous organisation like ISIS could emerge.

Renewed Western bombing in Iraq and Syria, including by the Australian government, has only added fuel to the fire.

Islamophobia and the resulting marginalisation of the Muslim community is an increasing issue inflamed by government policies. There has been a significant increase in violent hate attacks against Muslims over the past year, and even more since the Paris attacks.

Media coverage as well as government counter-terrorism efforts have often portrayed the whole Muslim community as responsible for terrorism. Successive rounds of new anti-terror laws have led to the targeting of the Muslim community.

The scapegoating of the Muslim community, as not doing enough to condemn or oppose terrorism, must stop.

To add your name email sydney@solidarity.net.au