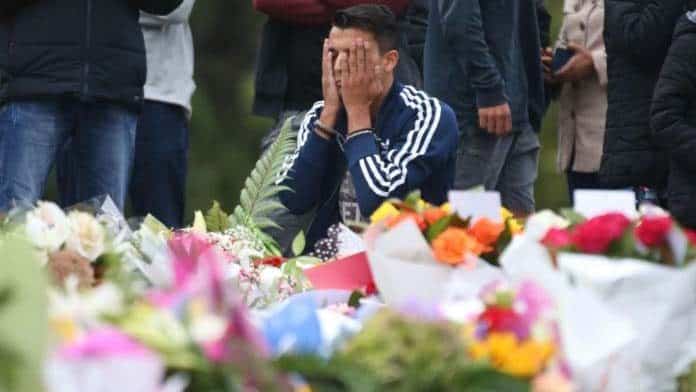 The shocking murder of 50 Muslims at Friday prayers in Christchurch is the latest horrific example of the far right terrorism—also seen in recent years in Norway, Canada and the US. But it is the direct product of the Islamophobia that has been stirred up and promoted in the political mainstream by the likes of Scott Morrison, Peter Dutton and Tony Abbott.

It is the Coalition’s official racism that has amplified the vicious anti-Muslim and white supremacist ideas of the likes of Queensland Senator Fraser Anning. Last year the Coalition even voted for Pauline Hanson’s “it’s ok to be white” motion in the Senate. We stand with “egg boy” Will Connolly who egged Anning at his press conference in Melbourne—but it will take a wider protest movement to push back the anti-Muslim ideas pushed by the politicians.

As Islamophobia has been ramped up in the media, attacks on mosques and Muslims have increased in Australia. Muslim women are now routinely abused in public, in incidents like one in January where a mother and her young son were abused on public transport by a woman who told them “I hate Islam”. She then assaulted another Muslim woman who tried to intervene. In November, a man entered the Al-Azhar mosque in Belmore in Sydney armed with a golf club and began threatening worshippers.

Brenton Tarrant, the Australian-born killer, issued a 73-page manifesto making it clear he was part of the online swamp of alt-right and neo-Nazi ideas. He listed Anders Breivik, the fascist who brutally shot and murdered 69 people in 2011 in Norway, as his “true inspiration”. Both of them embraced an extreme Islamophobia, claiming Muslim immigration of Europe constitutes an “invasion” that somehow threatens the white population.

All across the world, the far right is on the rise. Fascists have been elected to Germany’s national parliament for the first time since the Second World War. Italy’s racist Interior Minister Matteo Salvini has threatened to deport 500,000 migrants in a “mass cleansing street by street”. And US President Donald Trump has tried to ban Muslims from entering the US, defended neo-Nazis as “good people” and voiced support for anti-Semitic conspiracy theories.

In the aftermath of the tragedy, Prime Minister Scott Morrison condemned the attack as carried out by, “an extremist, right-wing violent terrorist”, calling on the community to unite against the “real enemy… hatred and intolerance”.

Yet Morrison himself has made a career out of stirring up racism and hate. While Shadow Minister for Immigration in 2010 he famously argued for the Liberals to campaign against Muslim immigration, in a disgraceful attempt to stir up racism and win votes.

As Immigration Minister, he established Operation Sovereign Borders and instructed the Immigration department to refer to asylum seekers arriving by boat as “illegal” arrivals.

As recently as November, following the attack in Melbourne’s Bourke Street, Morrison was scaremongering about “radical, violent, extremist Islam”, despite evidence that Shire Ali, who carried out the attack, had a history of mental illness. Morrison even targeted the Muslim community as a whole, blaming them for the attack and declaring “more needs to happen” from Muslim leaders to tackle extremism.

This was only the latest episode in the two decades long “war on terror”, which has cast suspicion on the Muslim community as a whole through draconian anti-terror laws and raids on Muslim homes.

The Australian government has also been a key backer of the Western wars and bombing raids across the Middle East since 9/11 that have claimed hundreds of thousands of Muslim lives.

In the lead up to the election, the Liberals are desperately trying to whip up a scare campaign about refugees in an effort to win votes. Morrison and Dutton have smeared refugees on Manus and Nauru as criminals and even claimed Australians could be thrown out of hospital queues if refugees were brought here for medical treatment.

And we need a stronger stand from Labor. Too often, Labor has refused to condemn the Liberals’ racism and fearmongering. Labor leader Bill Shorten continues to support the offshore detention of refugees on Manus and Nauru as well as refugee boat turnbacks. And Labor itself has scapegoated temporary migrant workers for taking jobs.

Anti-racist organising and protests are vital to reject both the racism of the far right and the political mainstream. The demonstrations against Islamophobia in response to the massacre in Christchurch, including 2000 people yesterday in Melbourne and today’s rally in Sydney, are an important start. The rallies for refugees on Palm Sunday on 14 April are another chance to hit the streets before the election to say no to racism and fear.

Flemington residents stand up to racism and police violence