Dutch far-right politician and arch Islamophobe Geert Wilders hoped his Australian tour would further the spread of his racist anti-Muslim politics. But after he was dogged by protests and opposition, he told tour organisers, “I bet you think twice about ever inviting me to Australia again”.

In both Melbourne and Sydney his meetings were confronted by angry demonstrations branding him a racist. In Perth he was forced to cancel his speech after the venue withdrew the booking at the last minute. In both Sydney and Melbourne he was forced far out into the suburbs after a succession of other venues refused to host him. Thirty venues in Sydney alone told Wilders he was not welcome.

From the minute of his arrival in Australia, Wilders was given blanket coverage in the media, using non-stop interviews to promote his racist idea of a blanket ban on Muslim immigration. Many on the left argued that protests were counter-productive, and would only draw attention to him. But they missed the point. The mainstream media can hardly be trusted to ignore such a high profile Islamophobic bigot. They have spent the last ten years helping spread fear about Muslims themselves, with scare stories about “home grown terrorists” and “ethnic” crime. 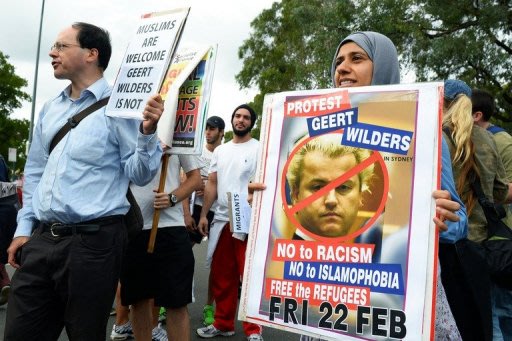 In the Netherlands, Wilders has succeeded in making openly racist statements about Muslims an accepted part of the political mainstream. His Party for Freedom now holds 15 seats in the Dutch parliament.

If we hadn’t protested, his ideas would have faced far less of a challenge—particularly when mainstream political leaders in Australia are happy to court racists through dogwhistling about asylum seekers and foreign workers.

The protests forced the media to report on the opposition to Wilders, and that many saw him as a racist. They also sent a message to the hard core of racists, like tour organisers the Q Society, that racist politics will be met by protests and opposition every step of the way.

Protesters were accused of wanting to deny Wilders free speech. But the kind of racist hate speech Wilders peddles leads directly to a growth in violent racist attacks. He wants to deny other people their freedom, by stopping them practicing their religion, and by subjecting them to attacks on the street.

The Platform Against Racism and Discrimination in the Netherlands thanked Australian protestors, saying, “We thank you for standing up against Geert Wilders and his message of intolerance, racism and hatred. And we want you to know that Wilders is not speaking in our names. You are, with your colourful protests and message of solidarity and hope!”