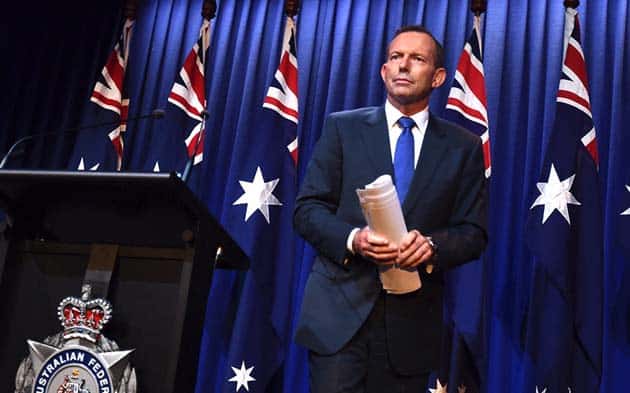 Tony Abbott made his most explicit attack on the Muslim community yet in a “national security statement” in late February, surrounded by Australian flags.

Abbott went out of his way to talk up the threat posed by Islamic State (IS) and blame the Muslim community for terrorism, saying, “I’ve often heard Western leaders describe Islam as a religion of peace. I wish more Muslim leaders would say that more often and mean it.”

It is not Islam, or “Muslim leaders” who are responsible for the rise of IS, but the brutality of Western imperialism, which waged a war on Iraq which killed more than one million people, threw the country into chaos and installed a vicious sectarian government.

Abbott followed his security speech by announcing more troops for Iraq, with an additional 300 soldiers to train the Iraqi army alongside New Zealand. Australian warplanes have been consistently bombing Iraq since September 2014. This is the real reason threats have been made against Australia.

But while he throws fuel on the fire, Abbott scapegoats Muslim leaders, saying they aren’t doing enough to stop terrorism. He even asserted they “don’t mean it” when they condemn groups like Islamic State.

There was immediate and justified outrage. Randa Kattan, head of the Arab Council of Australia, slammed the comments as, “counterproductive and extremely insulting to many of us who have been working really hard on this. It just inflames sentiments that are bordering on hatred and racism.”

As she pointed out in a speech marking International Women’s Day at Sydney University, “no matter how often we have condemned terrorism it’s always questioned and we are lectured on the need to do more”.

“As a community, we have been at the receiving end of such stereotypes for decades. And I in my position as CEO of Arab Council Australia have lost track of how often over the years I have had to respond to the vilification and demonisation.

“They hold us accountable for the deplorable behaviour of a few. They pigeon hole us and ignore the diversity and richness within communities. They serve to divide, silence and marginalise us.”

As novelist Randa Abdul-Fattah also argued, “Out of 400,000 Australian Muslims, 110 are known to have joined ISIL. And yet, despite this minuscule ratio, Muslims and their faith are being held to account, clearly framed as the enemy in the ‘war on terror’.”

The media has been central to this scare campaign, leaping on every report of someone leaving to fight for Islamic State (IS). The news that teenager Jake Bilardi had died in a suicide attack in Iraq set off another round of hysteria.

The government claims it is simply sophisticated terrorist propaganda driving people to join IS.

Attorney General George Brandis announced $18 million for “countering terrorist propaganda”, as if it was online videos and Twitter accounts that are turning people to terrorism.

This follows a “Countering Violent Extremism” program announced last year to fund local service providers to, “help individuals to deradicalise and turn away from ideologies of violence and hate”.

The media have also pushed this view, with Fairfax reporting “Bilardi’s 4400-word manifesto confirms that he radicalised himself by reading news sites from around the world”.

But when The Age delved a bit more deeply, they found Bilardi was reading, “about Israel’s bombing of Gaza, the Vietnam war, drug gangs in Mexico, the early days of Australia’s settlement.” In other words it was the very real crimes and atrocities of Western imperialism that affected Bilardi, as well as his experience of social alienation.

For young people in the Muslim community, the racism and Islamophobia that gushes forth from politicians like Tony Abbott and the media further fuel resentment.

It is these real problems that have seen, in a tiny number of cases, people attracted to IS.

This is a futile and wrong response to racism and imperialism. But, like the growth of IS in Syria and Iraq itself, it shows that it is Western leaders that bear the main responsibility.