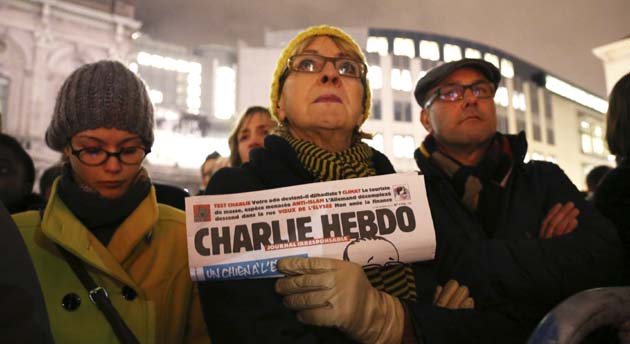 Following the attacks in Paris Tony Abbott and other leaders pledged to stand up in defence of freedom of speech. This is gross hypocrisy.

Our rulers have no qualms about brushing aside freedom of speech when it suits their interests.

Despite all the talk of “French republican values”, last year France became the only country in the world to ban Palestinian demonstrations during the war on Gaza. In the two weeks after the Charlie Hebdo killings over 80 people were prosecuted for “defending terrorism”, often for offhand remarks on public transport or social media. They included not just anti-semitic comedian Dieudonné M’bala M’bala but dozens of ordinary people including a 14-year-old.

Fifty world leaders united in the spectacle of a “march for peace and freedom” in Paris headed by French President Francois Hollande.

The US too, represented by its ambassador, killed two Reuters journalists in Iraq in 2007, exposed on film by WikiLeaks. Alongside them was the Egypt’s foreign minister, whose 30,000 political prisoners include Australian journalist Peter Greste and two others from Al Jazeera.

Here in Australia, the government’s latest anti-terror laws, passed late last year, threaten journalists who report on “special intelligence operations” with up to ten years’ jail. Police have previously used anti-terrorism laws to raid Australian supporters of national liberation struggles, such as the Tamil Tigers and the Kurdish PKK.

Abbott has shown contempt for free speech through targeting the ABC, attempting to silence criticism of government policies and accusing it of being “unAustralian”. His secrecy over asylum seeker boats and contempt for media scrutiny has gone to extreme lengths.

In reality there is no genuine freedom of speech in our society.

The mainstream media has enormous power to determine what opinions are heard. Yet the bulk of it is controlled by big business and identifies with their interests.

Australia has among the most concentrated media ownership in the world, with Rupert Murdoch alone controlling 70 per cent of the newspapers nation-wide. This means that right-wing commentators like Andrew Bolt and Tim Blair, whose views coincide with Murdoch’s, have enormous scope to promote their ideas. There are no comparable figures on the left with anything like this reach.

Even at more liberal outlets like the ABC, The Age and the Sydney Morning Herald trying to get supportive coverage of strikes or ideas judged to be outside the political mainstream is near impossible. Witness the vehemence with which even ABC interviewers feel they can attack those with unconventional views—Emma Alberici’s savaging of Hizb ut-Tahir’s Wassim Doureihi on Lateline to such an extent that Abbott personally commended the interview, or her similar efforts when interviewing The Greens’ Christine Milne over asylum deaths at sea.

The attack on 18C is designed to give greater confidence to racists to abuse Muslims, Aboriginal people and immigrants, just like Attorney General George Brandis’s comment that “people do have a right to be bigots”.

The government has been happy to trample on the freedom of speech of its critics, but wants to give every encouragement to its supporters like Andrew Bolt and the hard right. That’s why the left should oppose the changes to the RDA.

Using the courts and legislation like the RDA are no way to fight racism. But socialists do not support untrammeled freedom of speech. What is said also has consequences in the real world. Few would defend the free speech of people to promote child abuse or violence against women.

Similarly, allowing hate speech for racist groups under the guise of free speech leads directly to an increase in verbal abuse and violent racist attacks. The rise of Pauline Hanson saw an increase in attacks on Asians and Aboriginal people, including a firebomb attack on an Asian business.

This is why the slogan “I am Charlie” and the desire amongst some to endorse its efforts to publish provocative and racist cartoons are a mistake.

The challenge is to build sufficient opposition that such racist and Islamophobic outbursts become unacceptable.

This article used material from Amanda Porter’s article “Speech in France is not so free as Section 18C critics would have it” published at The Conversation, originally without attribution. We apologise for this.