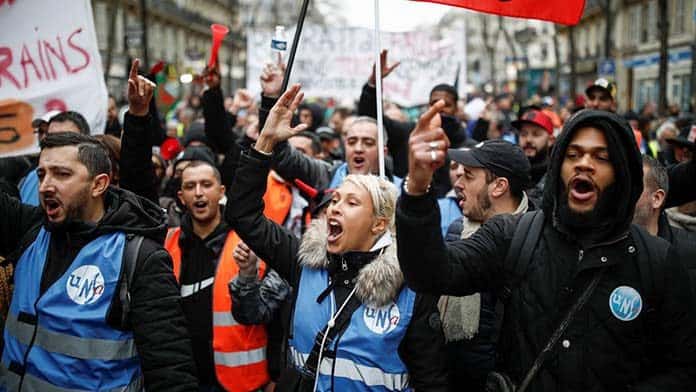 France is in the grip of an extraordinary strike wave against President Emmanuel Macron’s assault on pensions. Massive demonstrations have taken over the streets of every major city for more than a month.

A huge one-day strike on 9 January, the fourth of such kind, saw a rally of over 350,000 in Paris alone. In Marseille, France’s third biggest city, 220,000 people took part, while tens of thousands of French workers remain on indefinite strike over seven weeks since they began on 5 December last year.

One chant in Paris told of the strikers’ determination to win, “On ira jusqu’au retrait”—we will keep fighting until you back off.

On 12 January French Prime Minister Edouard Philippe announced a concession, shelving the plan to reduce the pension age from 64 to 62. But he made it clear this was just a temporary decision, and that the government remained determined to force through wider cuts to pensions to reduce payments by an average of 30 per cent.

The revolt is being spearheaded by workers at the national rail company, SCNF, and the Paris public transport company, RATP. They have vowed to continue an indefinite strike until the pension reform plans are off the table altogether.

The rail workers’ walkouts have now lasted longer than the extended strikes of 22 days in 1995 that defeated then Prime Minister, Alain Juppe’s, pension cuts.

Half of the national rail services have been cancelled and most of Paris’s metro lines aren’t working. Bus services are also much reduced. Picket lines have been bolstered by high school students, fresh from the climate strikes, who are stopping scabbing at train and bus depots.

Millions of workers have joined other days of action and mass demonstrations over the Xmas-New Year period, when much of France continues working.

Hospital workers and teachers have joined the strikes, in opposition to the pension reforms as well as shortages of hospital beds and reforms to the school curriculum. Firefighters held a week-long protest camp in central Paris.

Postal workers in 20 regions, who are in dispute with the state-owned La Poste over changes to working conditions, also went on strike.

Hundreds of petrol stations have run out of fuel after strikers halted production with picket lines that blockaded refineries. Strikers and Yellow Vests protestors have marched together in several cities, despite police attempts to keep them apart.

Since taking office, centrist President Emmanuel Macron has set out to succeed whether other French presidents failed in dismantling pensions and the French welfare state.

French public social expenditure is still the highest amongst OECD developed nations, to the despair of big business and the rich.

Despite the impression that French workers go on strike all the time, Macron has so far been successful in driving through attacks such as privatisation in the rail system, more “flexible” labour laws and spending cuts.

This has seen him widely derided as “president of the rich” and has generated enormous bitterness—seen in the explosive Yellow Vests protests. That mood of revolt could be starting to spread. One newspaper said the current strike wave was the unions’ “biggest show of strength in decades.”

But France’s top union leaders have not shown the same determination as the strikers. Some openly supported Macron’s demand for a “Christmas truce” to restore transport services. This did not happen because rank-and-file strikers rejected it.

The UNSA federation called for its rail workers to go back over Xmas-New Year—but then 14 of its regions rejected the call and the strikes continued.

In some areas, rank-and-file workers have started to take control of the strike out of the hands of union leaders. Rail workers on indefinite strike hold regular local assemblies which discuss and vote to continue to continue the action. In some places workers come together across the five competing union federations, and across different industries, to maintain and build the strikes.

Other federations have backed further strikes, but most have not joined the rail workers to declare indefinite strikes or move towards an ongoing general strike.

The refusal of Macron to back down on this pension attack raises starkly the need for the kind escalation to secure victory against him.

The moderate CFDT union federation jumped at the chance to negotiate as a way to end the strikes, after the first weak concession on lowering the pension age.

The result hangs in balance.