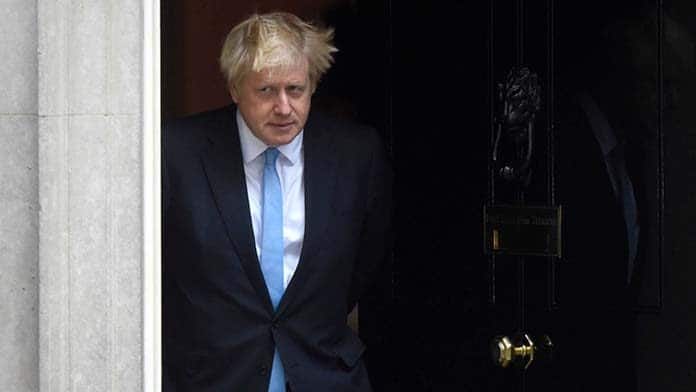 Boris Johnson’s determination to exit the EU on 31 October, deal or no deal, has created an enormous political crisis in the UK.

After he caused outrage through announcing he would shut down parliament to try to deny MPs any say, 21 Tory MPs voted with Labour and others in early September to rule out a “no deal” exit.

Rather than be bound by these terms, Johnson wants an election and will expel the rebels.

Parliament is blocking an election until it is guaranteed a “no deal” exit is impossible.

Overwhelmingly big business wants to stay in the EU because it sees access to the European market as key to its profits. If this can’t be achieved they at least want a negotiated soft exit. They oppose a “no deal” exit because this would seriously disrupt trade with Europe.

The Tory rebels are doing their bidding. For over 100 years the Tories have fought for the interests of big business. The rebels accuse Johnson of being a cheap populist, putting his personal ambitions ahead of the “national interest” (i.e. business interests).

Johnson hopes to use the threat of a no deal Brexit as a lever in negotiations with the EU. A sudden British departure would also damage EU profits. Johnson thinks this will put pressure on them to cough up better terms. If this fails, his back-up plan is to copy Trump and whip up racism and nationalism and in the confusion introduce radical pro-business measures such as a free trade agreement with the US and tax cuts for the rich.

Johnson has likened Muslim women in burkas to “letterboxes” and “bank robbers” and has called Africans “piccaninnies” with “watermelon smiles”.

His cabinet is stacked with arch right wingers such as home secretary Priti Patel. She echoes Trump, wanting strong borders to “tackle illegal immigration”, “terrorists” and “criminals”. On the day after Britain exits she claims the government can immediately end the free movement of labour. She wants a pro-business immigration program that only welcomes the “brightest and best”.

Like Trump, Johnson paints himself as an outsider taking on the establishment. The people who voted for Brexit in 2016’s referendum “weren’t just voting against Brussels” he claimed, but also London.

Johnson wants to frame the coming election as “the people vs the politicians”.

For three years the parliament has failed to implement the result of the 2016 referendum. Johnson—the millionaire Eton educated toff—will present himself as a people’s champion battling the London elites determined to subvert the people’s will. He hopes this will win back votes from Nigel Farage’s Brexit Party.

The crisis in the Tories should be a huge opportunity for Labour. Unfortunately they too are divided and confused.

The majority of Labour MPs are pro-market Blairites who hate left-wing leader Jeremy Corbyn, who was elected by the membership. They want Labour to position itself as a pro-business party and have pushed Corbyn closer to a pro-Remain position.

Much of Labour’s rank-and-file who installed Corbyn are also pro-Remain. They rightly detest the xenophobia coming from the Brexit camp but are inclined to paint the EU as progressive. But the EU rules are pro-market and pro-austerity. While there is free movement of people within the EU, there are high walls against entry from outside.

Immigrants are drowning in their thousands in the Mediterranean because of EU boat turnback policies.

In the 2017 election Corbyn surprised everyone when he won 40 per cent of the vote and forced the Tories into minority government. He was meant to be an “unelectable” socialist.

Corbyn campaigned on a radical program with clear working class demands, promising to tax the rich, abolish tuition fees, implement a minimum wage and put more money into health and education. During the election he called mass rallies and created genuine enthusiasm.

But more recently he has been drawn into parliamentary manoeuvres around Brexit with rebel Tories and others.

His refusal to support an election until the parliament has voted to rule out a “no deal” exit is being used by Johnson to paint him as part of the political elite sabotaging the people’s will.

Many of Labour’s traditional supporters, particularly in the run down northern industrial areas, voted to leave the EU because its free market policies did nothing for them. Labour is in danger of losing these voters to the Brexit Party if they continue to play parliamentary games with Remainers and former Tories.

The best way to fight Johnson and Farage is with class politics. That means a radical campaign based on the kinds of demands Corbyn’s campaign raised in the last general election—and fighting for a left-wing break from the EU.