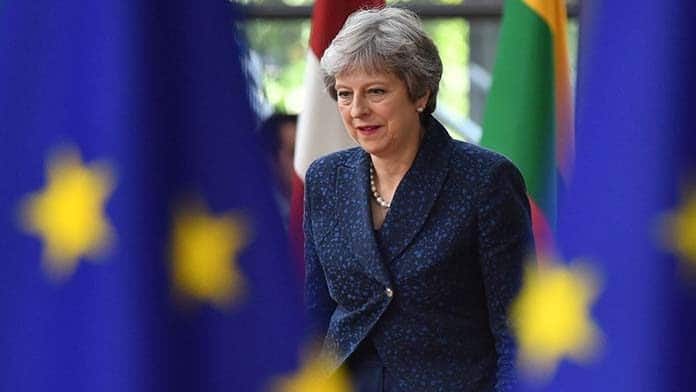 Foreign secretary Boris Johnson and Brexit Minister David Davis have resigned from her cabinet in opposition to her latest plan for the terms of Brexit.

Davis claimed that May had sold out to the European Union (EU) with her new “soft Brexit” strategy agreed by her cabinet. “We have given too much away, too easily,” he said.

May had pushed the cabinet to accept that Britain would continue to follow EU rules governing manufacturing and agriculture after Brexit. This was the only way to deliver what big business wants—no obstacles to making profits.

In addition the European Court of Justice would be supreme in interpreting the British-EU rules.

Such moves are hated by substantial sections of the Tories. They want Britain to be able to make its own trade deals outside any EU influence. They also see leaving the EU as a way to force through even more racist immigration laws.

The EU is a free trade zone that gives firms across Europe access to a huge market for their goods.

The Tories’ friends in the City of London and big business want to remain in the single market and have opposed the idea of Brexit from the beginning.

They want as few barriers to their trade and profits as possible.

May’s new deal represents a victory for multinational firms and bosses. But it has torn the Tories further apart.

Two years ago Britain voted to leave the EU in a referendum. There was a significant racist element to the No vote, with the campaign run by racists from UKIP and the Tory right-wing. But with the establishment lining up in support of the EU, the vote was also a cry of rage against big business and the elite.

As Labour leader Jeremy Corbyn put it, the vote was a message, “that millions of people feel shut out of a political and economic system that has let them down.”

The Tories have tried to pull people’s anger against the establishment in a right-wing, racist direction by scapegoating migrants.

To win back UKIP voters May dressed up the Tories as the party of Brexit and promised to dump freedom of movement for EU migrants as part of any Brexit deal.

May is also hemmed in by the EU’s insistence on a hard line in Brexit negotiations, designed to punish Britain and deter moves to exit the EU from any other country.

Some on the left in Britain are campaigning for a new referendum to try to overturn the decision to leave the EU.

This is a huge mistake. It sends a message of contempt for the democratic vote to exit, and would drive people towards the far right.

Labour Party leader Jeremy Corbyn, who has already made concessions to support a negotiated “single market”, is now under pressure from sections of the party to support a new referendum.

But the EU is a pro-capitalist and pro-imperialist institution that acts as the guardian of the bosses’ interests across the continent.

The EU’s single market rules ban socialist policies such as wholesale nationalisation of industries or services.

This was seen most graphically in its strangling of the Greek Syriza-led government’s attempt to break from austerity. As Yanis Varoufakis, then Greece’s finance minister, wrote, the EU, “effectively condemned Greece to a modern version of the Dickensian debtors’ prison.”

Even when the Greek people voted to reject the austerity deal through a referendum, the EU simply ignored their democratic decision and insisted on enforcing it anyway.

The EU imposes limits on each country’s public sector deficit, which has been used to demand sweeping cuts to government spending on services.

The EU is no force for international solidarity and anti-racism. Its Fortress Europe border regime has seen it strike deals with Turkey and Libya to keep out refugees. Its leaders are now discussing plans for refugee detention camps in Africa, in imitation of Australia’s offshore detention regime.

At least 1400 refugees and migrants have drowned in the Mediterranean so far this year. EU countries are now preventing rescue efforts by detaining rescue boats run by aid organisations. This condemns migrants to death at sea.

The Tories stuck together after their shattering blow at the last general election, where they came close to losing government. Theresa May’s leadership appears to be secure for now. But they face ongoing divisions and a torturous process of negotiations with the EU. The Tory government is weak.

More serious anti-austerity and anti-racist resistance from below could finish them off.