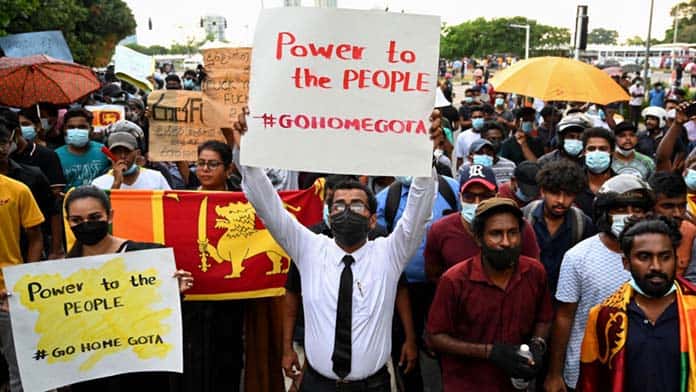 Sri Lanka has been rocked by weeks of mass demonstrations and a general strike, following its worst economic crisis since independence in 1948.

The prices of food, fuel and medicines have skyrocketed amid chronic shortages, massive queues and inflation of 40 per cent. The lack of foreign exchange means that the country cannot pay to import basic items.

The protests have already forced the resignation of one set of government ministers. Protesters are demanding the complete exit of the Rajapaksa family, who have dominated Sri Lankan politics since 2005. Their rule has been marked by corruption, failed investments and austerity for the poor.

Gotabaya Rajapaska was elected president in 2019 after ramping up Sinhalese chauvinism. He criticised the previous government for being “too accommodating” towards Tamils and Muslims, and capitalised on deadly terrorist attacks on Easter Sunday 2019.

He appointed his brother Mahinda Rajapaksa, who ran the country during the final stage of the civil war against the Tamils, as Prime Minister—and two other brothers as ministers. Mahinda was forced to resign and had to be rescued by police after crowds stormed his official residence.

Days of clashes after pro-government thugs attacked a protest camp on the Colombo seafront left nine people dead and more than 300 injured.

Sri Lanka has begun to default on foreign loans of over $51 billion.

Gotabaya is flatly refusing to step down. He has appointed Ranil Wickremesinghe, widely seen as a stooge of the Rajapaksas, as the new Prime Minister.

His solution to the crisis is to further squeeze workers and the poor, calling on the population to “prepare to make some sacrifices”. He is preparing to impose IMF austerity measures, announcing the privatisation of SriLankan Airlines.

The struggle has the potential to not only bring down Gotabaya but to challenge the oppression of the Tamils or other minorities. Building working class unity is also crucial because race and religion have been used so often to undermine resistance from below in the past.

The protests have already seen unprecedented cross-community solidarity. Buddhist monks and Christian nuns have joined protests, while during Ramadan dozens of Muslim protesters gathered at the protest camp to break their fasts. One Muslim woman’s placard read, “You divided us to come to power. Now we are uniting to send you home.”

Sinhalese make up 75 per cent of the population and for decades the country has been dominated by extreme Sinhalese nationalism.

Discrimination and a succession of racist pogroms against Tamils saw thousands murdered and led to the armed Tamil Tiger rebellion. Their effort to establish a separate Tamil state was defeated in 2009 after a brutal civil war.

At least 40,000 Tamil civilians were killed in the final months of the war alone.

Sri Lanka remains as militarised as ever, with defence spending 12.3 per cent of Sri Lanka’s budget. The military presence in Tamil areas in the north is still overwhelming.

Both the smaller Muslim community and Indian Tamils from the tea plantation highlands have joined the protests. However, the larger Sri Lankan Tamil minority have been relatively quiet.

On 4 April there was an impressive mass demonstration at Jaffna University that united Tamil and Sinhala students. Shocked, local authorities promptly closed the university.

But the official Tamil leadership has failed to recognise the opening the uprising has created. Some have even discouraged participation.

There is doubtless distrust among the Tamils against the Sinhalese majority as a result of decades of oppression. Many Tamils still hope for a separate state.

But the new movement shows the possibility of winning Sinhalese workers away from the ethnic supremacist politics promoted by their rulers.

Sinhalese and Tamil workers have a common interest in fighting the ruling class politicians who benefit from corruption and exploitation at their expense.

In an encouraging development, Tamil civil society recently expressed its support for the protesters and condemned government repression, while calling on the movement to “liberate itself from Sinhala supremacy”.

On 18 May, Sinhalese, Tamils and Muslims in the capital Colombo joined the first ever public ceremony to remember those killed in the 26-year civil war.

In modern Sri Lankan history, this is an almost unprecedented opportunity to build a working class movement across ethnic and religious divides to make sure ordinary Sri Lankans do not pay the costs for ending the economic crisis.

Sri Lankan war criminal replaced by one of his henchmen

A shock election defeat has brought an end to Sri Lankan President Mahinda Rajapaksa’s rule. But as yet there is no evidence of a...

Tony Abbott has declared Sri Lanka “a society at peace”. But the truth is very different.

Morrison’s refugee bashing is all at sea

As Solidarity goes to press, the whereabouts of 153 Tamil asylum seekers is still unknown—except that they are on a Customs ship in the custody of the Australian government, probably still on the high seas in the Indian Ocean.