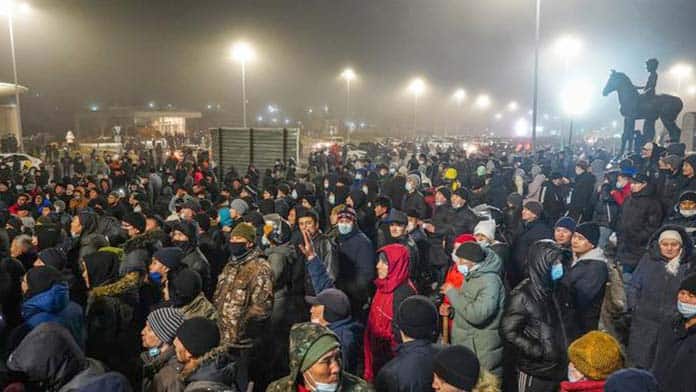 Kazakhstan’s dictatorial leader, President Kassym-Jomart Tokayev, has re-asserted his control over the country with the aid of Russian troops at the cost of 227 lives.

Many more were injured and an estimated 10,000 people have been arrested.

A woman who had been shot in the violence and was being treated in hospital in Kazakhstan’s biggest city Almaty, told the BBC how armed men in uniform burst into the ward and shouted: “If you go out to protest again, we will kill you.”

But the mass protests that flared on 2 January and continued for nine days showed that anger runs deep among ordinary Kazakhs.

And it is a reminder that growing inequality and poverty continues to trigger revolts around the world—from Sudan to Myanmar, from Belarus to Chile, and now in Kazakhstan.

Kazakhstan, which borders both China and Russia, is rich in fossil fuels and other minerals. It has 12 per cent of global uranium resources and is the world’s largest producer. It is a significant source of oil, coal and natural gas.

The country also has the world’s biggest reserves of chrome ores and is second largest in terms of silver, third in manganese ores, fourth in zinc and fifth in iron ore.

But the wealth has not been shared. The immediate trigger for the protests was the government’s decision to more than double the cost of gas used by car drivers. But for many it was just the last straw.

As the US magazine Foreign Affairs put it: “The anger on the streets reflected genuine and deep political and social problems in the country, which has experienced enormous change since independence in 1991.

“The protests were … a reflection of the frustration Kazakhs feel with widening inequality, the entrenched corruption of elites, and a calcified political system.”

When Kazakhstan gained independence following the fall of the Soviet Union in 1991, its government adopted free market “shock therapy”, guided by advisers from the World Bank and the International Monetary Fund.

The welfare state was dismantled and swathes of the economy were privatised.

The result was that some, especially then President Nursultan Nazarbayev and his family, became extremely rich. Central Almaty developed as a glitzy pocket of wealth while ordinary Kazakhs did not benefit.

Nazarbayev bolstered his increasingly corrupt regime by surrounding himself with oligarchs and cronies.

Protests began in the gas and oil-bearing western region, where people suffer from high rates of poverty and unemployment and are often treated as second-class citizens by the centre.

There is a history of struggle. In the city of Zhanaozen, workers in the mining industry went on strike in 2011. The authorities responded then with state terror. Some 14 workers were shot dead.

This time, the government retreated, dropping the gas price increase. But it was too late, with protests spreading to almost the entire country, strikes breaking out among mining workers, and protesters making new demands.

According to the Russian group Socialist Tendency, Solidarity’s sister organisation, protesters raised not just economic matters such as wage and pension rises, and a lower retirement age and lower fuel prices, but were making political demands.

Protesters called for the removal of Nazarbayev, who ruled the country from 1991 to 2019 and who was continuing to exert influence behind the scenes, as well as the current president Tokayev.

They also wanted elections for mayors and governors (currently appointed by the central government) and a guarantee that no civil and political activists would be prosecuted.

Repression and the presence of troops from Russia, along with small contingents from Armenia, Tajikistan, Kyrgyzstan and Belarus, have quelled protests for now.

Tokayev has moved to marginalise Nazarbayev, who at the height of the protests attempted to stage a coup.

But Kazakhstan will continue to be under pressure from Russia and China.

In the short term, Russia has gained most. As Al Jazeera put it: “The Kremlin declared victory, having managed to strengthen its influence in the post-Soviet space and securing the loyalty of Kazakhstan’s leadership and its respect for Russian geopolitical interests and the interests of the large Russian community in the country.”

But China will continue to use its economic investments to influence the Tokayev government, not least because it views Kazakh rulers as too sympathetic to the oppressed Uyghurs across the border in Xinjiang.

The workers and poor of Kazakhstan can expect nothing from the local elites or neighbouring powers. Instead they have shown the potential for people to look to themselves to change things.

A mass pro-democracy movement has forced Hong Kong’s chief executive Carrie Lam to grant a major concession. But many protesters are vowing to continue their struggle until all of their demands are met.

A sudden tumble on US stockmarkets has sent panic around the world. US stocks had their worst week for two years in February, down at one point by 10 per cent.

In late December a wave of mass protests in Iran began that spread to all corners of the country. Spontaneous protests erupted in nearly 70 cities.