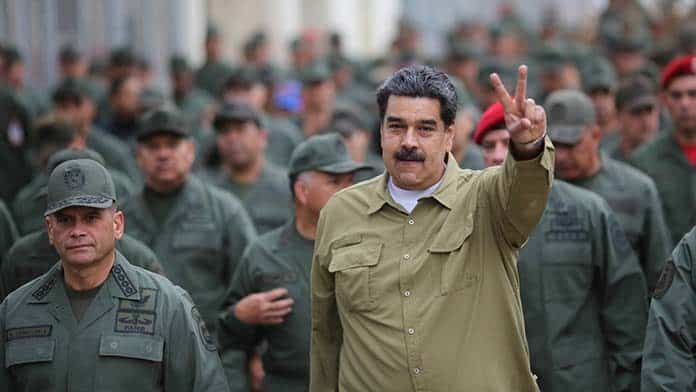 The ongoing right-wing offensive to oust Venezuelan president Nicolás Maduro came to a head on 23 January, with National Assembly leader Juan Guaidó appointing himself as interim president in a calculated move during a massive anti-government rally.

Within hours the governments of Donald Trump, Jair Bolsonaro and other right wingers had issued statements recognising Guaidó as president and demanding the resignation of Maduro. Support followed from Australia, Britain, Canada and the European Union.

In addition, the US has imposed new sanctions targeting the state oil company PDVSA, cutting off the main source of Venezuelan government revenue to put more pressure on Maduro to step down.

This could be the culmination of the long onslaught by the Venezuelan right to remove Maduro and reverse what survives of the gains made by the Bolivarian revolution in the early 2000s.

This attempt by western capitalist powers at regime change follows a long and bloody history of US-backed coups in Latin America. Socialists everywhere should unconditionally reject this imperialist intervention.

The welfare of ordinary Venezuelans is the least concern of the US and the other powers. They hope to gain better access to Venezuela’s oil reserves, the largest in the world, and remove a government seen as an obstacle to neo-liberalism and US domination in Latin America.

However, what steps the right will take following Guaidó’s self-appointment remains unclear. The move seems designed to stir the opposition forces and deepen the situation of ungovernability, creating a context where an intervention by sections of the military could become justified.

But Maduro, like Hugo Chávez before him, has been careful to keep the military close.

This is not just a conciliatory gesture to the Venezuelan powers; the military is part and parcel of the ruling party PSUV and the state apparatus. They sit in ministries and the boardrooms of state companies, and military officers such as Diosdado Cabello are part of Maduro’s inner circle holding state power.

Meanwhile, support for the opposition doesn’t exist throughout Venezuelan society. The urban poor may be joining anti-government demonstrations over economic demands or abstaining from voting, but this doesn’t mean they support the return of the traditional right, who don’t have anything to offer them and who if in power would unleash a wave of repression against them.

“This is a programme for the transition to socialism and the radicalisation of participatory democracy. We should not delude ourselves—the socio-economic form that prevails in Venezuela remains capitalist… This programme is aimed at the radical suppression of the logic of capital and a continuing transition to socialism. For new forms of planning and production for the benefit of the people to emerge requires pulverising the bourgeois form of the state.”

Instead, what we see is the failure of the economy to diversify and reduce its dependence on oil, which Chávez identified as the precondition to breaking the grip of neo-liberal global institutions on Venezuela.

The country is heavily dependent on imports. Production has ground to a halt and investment doesn’t take place. Hence the images of empty shelves in supermarkets and long queues to obtain basic food and medicine. For six years Venezuela has also had the highest inflation rate in the world, hitting nearly a million percent last year.

The unaccountable and undemocratic structures of the PSUV, which has fused with the state, have elevated layers of wealthy Chavistas into a new ruling class and given rise to huge levels of corruption, causing a further drain on the state funds and resources.

This is why those in the Venezuelan left that have distanced themselves from the PSUV are right to insist on the development of a new left organisation, independent of the state, that can fight for a working class strategy.

But this has to be combined with a defence of the reforms of the Chávez years and a firm opposition to imperialism.

This won’t be achieved by uncritically supporting the authoritarian means of Maduro or his attempts to conciliate sections of the old and the new bourgeoisie, but only by rediscovering the long lost radical mood of the Bolivarian revolution.

Amid pandemic, Trump steps up aggression against Venezuela