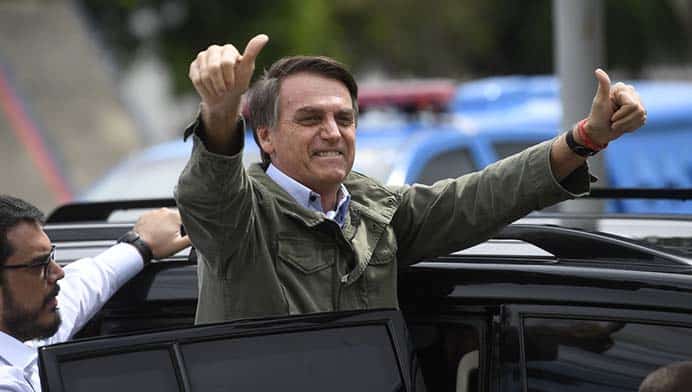 Brazil has a far right president after Jair Bolsonaro won 55 per cent in the final run-off election.

His victory, in Latin America’s largest country with a population of 210 million people, is another sign of the rise of the far right internationally.

He tapped a mood of disgust with Brazil’s politicians in the wake of surging unemployment, cuts to services and corruption scandals.

A former captain in the army reserve, he has praised the methods of military rule under the dictatorship that ran Brazil from 1964 until 1985, including the use of torture.

His campaign centred on unleashing the police on a “law and order” campaign, saying they should be rewarded if they “kill 10, 15 or 20 at a time”. Police shootings are already out of control in Brazil, with 895 killed in the state of Rio di Janeiro alone between January and July this year.

Bolsonaro has described himself as “homophobic—and very proud of it”, said women should be paid less than men and told a female parliamentarian, “I would never rape you because you don’t deserve it.” He has called black people “animals” who should “go back to the zoo”, fanning the racism in a country where there is still a racial hierarchy based on the legacy of slavery.

Despite his authoritarian rhetoric Bolsonaro as yet lacks the violent mass movement capable of imposing a fascist dictatorship. In his first speech after winning office he pledged to govern, “under the Constitution and the law”.

Yet his links with the military and rhetoric threatening a “cleanup” against supporters of the Workers’ Part (PT), the equivalent of the Labor Party in Australia, show his contempt for democratic rights.

The fascist and extreme right in Brazil have been emboldened by his success, with a number of violent attacks on PT supporters.

Following the first round of the presidential elections there were, “at least 50 separate attacks, three of which were particularly serious,” Brazilian socialist Valerio Arcary told Socialist Worker.

“In Salvador an artist was attacked and killed. He said publicly in a bar, ‘I voted for the PT.’

“A young woman was attacked and marked with the swastika.

“And at a university in south Sao Paulo one young student was attacked and seriously beaten because he was wearing a red cap. We have also seen localised right wing mobilisations.”

Bolsonaro was helped by a wave of sympathy after he was stabbed during the election campaign in September.

But his surge in support is mainly a product of Brazil’s economic collapse and disillusionment with the Workers’ Party.

Until 2011 the country experienced an economic boom driven by commodity exports to China. But in 2015 a severe recession began following a collapse in commodity prices, with the economy shrinking by 7 per cent in two years. Unemployment is still at 12 per cent.

“We’re in the grip of the biggest recession of the last 50 years”, Valerio Arcary said. “We’ve seen a fall in wages of between 15 and 20 per cent.”

Brazil is a country of stark inequalities. An Oxfam study last year revealed that the country’s six richest people have as much wealth as the poorest 50 per cent of the population, around 100 million people.

The PT held the presidency from 2003 until 2016, but agreed to accept a basic neo-liberal framework for running the economy.

It used the economic boom to increase welfare spending and the minimum wage. But when economic crisis hit, it moved to cut government spending in order to keep big business on side.

As a result, it has left its working class supporters deeply disillusioned. In the presidential election around 30 per cent of voters either refused to vote or spoiled their ballots, in a country with compulsory voting.

Since 2015, the right has been on the offensive, organising mass demonstrations against the PT and then voting to impeach Workers’ Party President Dilma Rousseff in parliament.

Rousseff was accused of tampering with government debt figures to help win the 2014 election. Senior PT officials were also caught up in a corruption scandal at the state-owned oil firm Petrobras during her time in office, drawing deep anger.

The right-wing parties that impeached Rousseff were also deeply implicated in the scandal.

While Bolsonaro said he would “transform Brazil” he is committed to brutal neo-liberal austerity. He has chosen the University of Chicago-trained Paulo Guedes as his main economic adviser, who advocates privatising state-owned companies, further cutting spending on services and tax cuts for the rich.

In the head to head presidential run-off, the Workers’ Party candidate, Fernando Haddad, received 47 million votes accounting for 45 per cent of the valid total.

There were massive demonstrations before the election organised by the women’s movement. A Facebook group called Ele Nao! (Not Him) attracted three million members within two days of setting up.

As Arcary explained, “It resulted in a demonstration on 29 September which saw a million people come on the streets demonstrating in a very militant fashion.”

This needs to be the beginning of concerted mobilisation by trade unions and the left—linked to building a socialist alternative independent of the discredited Workers’ Party.

Fascists thrive in France amidst austerity