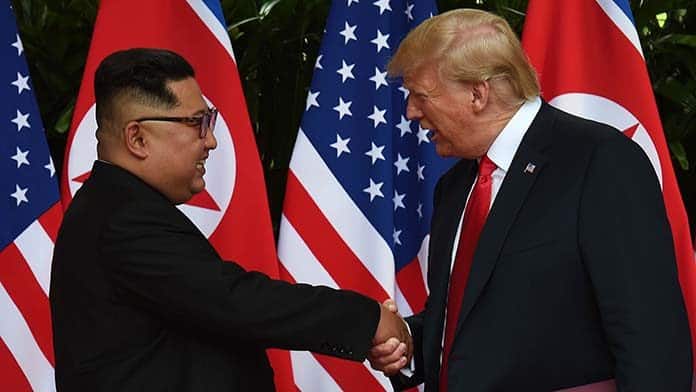 Donald Trump and Kim Jong-Un congratulated themselves after signing their agreement in Singapore, with Trump calling it “tremendous” and “better than anyone expected”. Kim pronounced the deal an “historic document”.

The agreement means the two nuclear powers have at least stepped back from the threats traded at each other through the last year. In September Trump raised the prospect of nuclear war when he promised to “totally destroy” North Korea.

But little was finalised in the talks, with even Trump admitting, “We’re probably going to need another summit.”

North Korea has used its development of nuclear weapons, including a capacity to strike American cities, to force the US to the negotiating table.

For its part the US responded with sanctions designed to cripple North Korea’s economy.

This is an example of the sick logic of imperialist competition, where the capacities of states to obliterate millions of people or starve populations into submission are treated as bargaining chips between rivals.

The agreement signed by both leaders contained little beyond vague pledges. It committed North Korea to “work towards complete denuclearisation of the Korean peninsula” in exchange for a “security guarantee” from the US.

But there was no detail on what this means. Trump insisted that North Korea was going to give up its nuclear weapons. But North Korea has insisted in the past that denuclearisation also means the removal of the US’s regional “nuclear umbrella”—its promise to retaliate to any nuclear attack on South Korea or Japan. It would likely demand the withdrawal of US troops from South Korea as well.

Trump has also agreed to halt regular military exercises with South Korea, which the North views as preparation for war. And Trump says that Kim has agreed to dismantle a missile testing site.

The US and North Korea have been here before. Two previous agreements that followed intensive negotiations, in 1994 and 2005, both ended in failure. This is usually explained in the media as a result of North Korean duplicity.

But it was the US that reneged on the 1994 agreement, failing to deliver the oil shipments or power plants it promised in return for ending North Korea’s nuclear program.

Then in 2002 George W Bush declared North Korea part of an “axis of evil”, alongside Iraq and Iran.

Shortly after this the US invaded and occupied Iraq on the flimsy pretext that it had weapons of mass destruction. North Korea had reason to feel under threat.

Now that it finally has the capacity to protect itself against a US invasion—through the deterrent of nuclear weapons—it will not easily give them up.

Today the US’s main concern is not the Middle East or North Korea, but the rise of China. In its National Security Strategy issued in December, the Trump administration declared China a major threat to US power. It condemned it by stating that, “China seeks to displace the United States in the Indo-Pacific region, expand the reaches of its state-driven economic model, and reorder the region in its favor.”

Trump has boosted US military spending to an obscene $900 billion in 2018.

China, with its reliance on trade that passes through the South China Sea, is vulnerable due to US control of the Pacific. It is seeking to secure its trade routes through installing and developing weapons to deter a potential US attack.

This month US Defence Secretary Jim Mattis accused China of “intimidation and coercion” through its militarisation of islands in the South China Sea. The US has staged provocative “freedom of navigation” exercises through the area to assert its opposition to Chinese control of the area.

North Korea is caught up in this game of rivalries. The Chinese government has been North Korea’s sole remaining backer since the 1990s. China is desperate to avoid a collapse of the regime or any reunification with South Korea which would see a US ally on its border.

The US has responded to the rise of China through strengthening its alliances with other states in the region in an effort to encircle it, including Japan, India, the Philippines and Vietnam. It has also moved to increase the US’s military presence into the region, including its placement of 1500 US marines in Darwin.

It has so far refused to remove the 28,000 US troops stationed in South Korea.

Trump has also left the sanctions against North Korea in place and will continue to pressure China to enforce them. He may have suspended war games, but the US war machine is still a threat. In Australia, Turnbull and Bishop are urging Trump to make more demands on North Korea.

Behind the bluster and political theatre of the summit, Trump is as dangerous as ever.