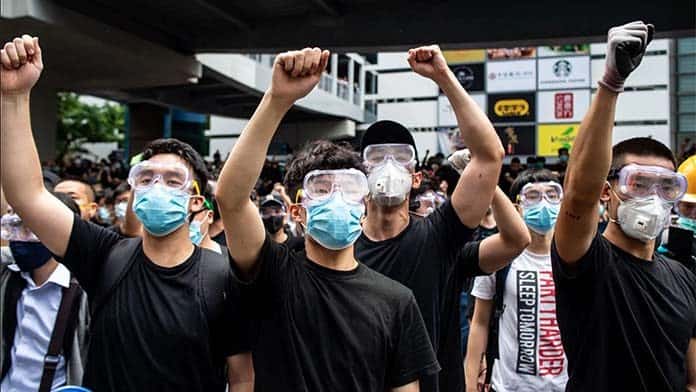 A mass pro-democracy movement has forced Hong Kong’s chief executive Carrie Lam to grant a major concession. But many protesters are vowing to continue their struggle until all of their demands are met.

The movement began in June in opposition to a new bill that would allow suspects in Hong Kong to be extradited to mainland China. Within days, mass protests forced Lam to suspend the bill.

Now she has made her biggest concession yet, promising that the bill will be formally withdrawn. But since June the movement has grown into a battle to win a different kind of society.

Demonstrators’ demands include Lam’s resignation, a fully independent inquiry into police violence, an amnesty for all those jailed and more democracy. Now many are repeating the slogan, “The five core demands—we will accept nothing less.”

Lawmaker Eddie Chu said that if Lam withdraws the bill “then we will change our slogan to, ‘Four key demands, we will accept nothing less’.” Protester Claudia Mo said, “This is too little, too late. The die is cast.”

Lam’s announcement is a testament to the strength of the movement in Hong Kong. Mass protests, strikes and direct action have terrified the authorities in Hong Kong and China.

At least a quarter of the population has taken part in protests. And people have continued their action for over 14 weeks—in defiance of extreme violence from cops and masked thugs.

Police have attacked protesters with batons, tear gas, pepper spray and rubber bullets. They have fired live ammunition to try and disperse demonstrators. Many protesters wear eye patches in reference to a woman who may lose an eye after being hit by a police beanbag round.

And cops say that they have arrested 1117 people since protests began on 9 June.

Lam has also announced other measures to try and “fully allay public concerns”. These include adding more members to the police watchdog group and sending officials “into the community” to listen to ordinary people.

This falls short of an independent commission to investigate police violence. Lam admitted that her plans won’t “address all the grievances”.

University student Krystal Hung said, “This is more important than school. I can catch up on my studies on my own. And if I don’t come out this time, I may not have another chance in the future.”

The Hong Kong Confederation of Trade Unions estimated that 350,000 joined a general strike on 5 August.

Some protesters have waved US flags and called on US president Donald Trump to intervene.

But ruling classes in the US and Britain will put their own interests before those of ordinary people.

The movement in Hong Kong is showing the power that ordinary people have when they take collective action. They will have to keep up the pressure to win all of their demands.

Ayotzinapa—School of struggle that dares to challenge death in Mexico