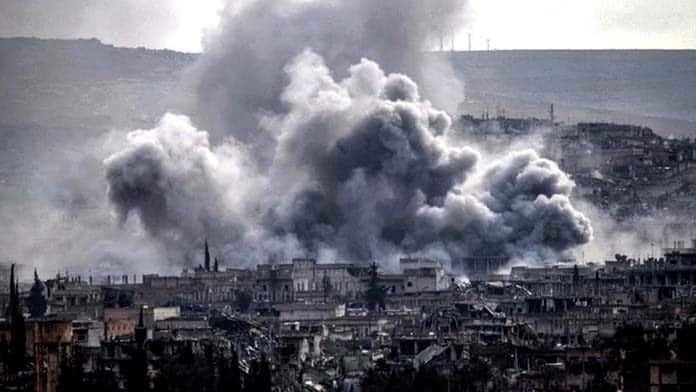 The US, Britain and France have launched new airstrikes against targets in Syria.

Malcolm Turnbull gave his full support to the attack, saying the, “use of chemical weapons… under any circumstances is illegal and utterly reprehensible.”

But this grandstanding about preventing chemical attacks is gross hypocrisy. The West has no concern for the hundreds of thousands of Syrians killed at the hands of the brutal Assad regime.

Turnbull has held Syrian refugees who fled the regime on Nauru for almost five years.

More Western bombing only increases the chances of the war escalating even further. The US wars in Iraq and Afghanistan caused the deaths of hundreds of thousands of people, and helped produce the nightmare across the region. All of this had the full support of the Australian government.

Last year, the US sold $650 million of weapons to Saudi Arabia and the United Arab Emirates for the barbaric war in Yemen, against the Iran-backed Houthis.

In April last year US President Donald Trump fired 59 cruise missiles against a Syrian airbase. “This time”, according to US Defence Secretary Jim Mattis the US and its allies, “have struck harder”. Three targets allegedly involved in the manufacture and storage of chemical weapons were hit, following a suspected chemical attack on the rebel-held town of Douma.

The Assad regime has used chemical weapons on dozens of occasions, alongside the ruthless bombing of hospitals and heavily populated civilian areas by the regime and its Russian ally. It has been waging a brutal assault on one of the last rebel-held areas in Eastern Ghouta.

The regime is responsible for the bulk of the over 500,000 people killed in Syria since 2011. For all the brutality of groups such as Islamic State, it is only Russia and the Syrian regime who have an airforce capable of carrying out airstrikes across the country.

Western powers are not motivated by the appalling death toll among ordinary Syrians. They have stood by for seven years as the regime first shot down demonstrators during a popular revolution then unleashed terror on civilian areas controlled by the opposition. The US last year used white phosphorus in both Syria and Iraq and its bombing, with Turnbull’s support, has killed thousands of Syrians in Raqqa and other places.

In recent months the US has turned a blind eye to Turkey’s military operation against Kurdish areas in the north of Syria.

Syria has become a battleground where major powers from across the region are jockeying for influence. The rebel groups backed by Gulf States like Saudi Arabia and Qatar as well as Turkey are facing defeat.

But the Assad regime has only survived as a result of support from Russia and Iran. The Iranian military is looking to develop a permanent presence across the country—including near the Golan Heights, Syrian territory that Israel took control of in 1967.

Israel has launched a number of missile attacks against Iranian and regime targets inside Syria in recent months.

Another suspected Israeli attack caused a large explosion at a military facility south of Aleppo, just hours after the latest US airstrikes. The base was being used by Iranian troops.

Imperialist intervention increases the danger of a more serious clash between regional powers like Israel and Iran.

The US has 2000 troops inside Syria as part of its campaign against Islamic State.

Trump has talked of withdrawing them, but the US missile strikes are a way of demonstrating the US’s continuing military power. They will embolden Israel to step up its attacks, and they also risk a clash between Russia and the US.

Socialists should demand the withdrawal of all foreign troops from Syria. The hope in Syria lies in rebuilding the democratic struggle that Assad, Russia and other imperialist powers have tried to drown in blood. Mass protests in Iran raised demands against their own rulers and their involvement in Syria during the uprising in January this year.

In the West, the best support we can give to the people of Syria is to oppose the bombs of the US, UK and France. Western intervention can only increase the bloodshed and horror in the Middle East.

In Australia we oppose the Turnbull government’s cooperation with, and support for the US attacks on Syria.

Australia joined the bombing campaign in Iraq and Syria in 2014 and only ended its involvement in January. There are still around 500 Australian military personnel involved in training roles in Iraq.

No to US bombing; no to US troops or bases in Australia; all Australian troops out of the Middle East.