Danny Hardiman looks at the lessons of the movement against the Vietnam War in Australia, and how it turned the tide of public opinion

The movement against the Vietnam War was a pivotal moment in radical Australian history. Over a period of five years the movement grew from a handful of militant students and trade unionists to hundreds of thousands of supporters across the country.

It was able to win the withdrawal of Australian troops from the war, radicalise a wide layer of society and completely shift the weight of public opinion.

It is a struggle mostly remembered and taught today in the context of the 1960s, supposedly solely brought about by the so-called “spirit of the times” of resistance and generational revolt.

But when the war was first announced it was enormously popular, and it was only due to the dedicated and courageous actions of a militant minority that the movement was able to grow and seriously derail the Australian war machine.

When Menzies first announced that Australia would begin sending troops and advisors to Vietnam there was little opposition.

This was at the height of the anti-communism of the Cold War period, and a wide layer of society bought into the idea that fighting the Viet Cong was necessary for the struggle against communism both at home and abroad.

At this stage, the main opposition came in the form of a handful of left-wing unions, Save Our Sons, a women’s group who fiercely opposed conscription, and the Youth Campaign Against Conscription.

They helped to spread the arguments against the war, beginning the fight to shift public opinion against it. However the war still had majority support and these opponents remained on the fringes.

The first Youth Campaign against Conscription was formed in November 1964 in response to Prime Minister Bob Menzies’ announcement that conscription would be restarting. The campaign gained momentum with an advertisement in The Australian on 19 June 1965. YCACs were set-up across the country and students in particular began organising marches, protests, sit-ins, draft card burnings, meetings, and vigils.

For left-wing unions, the first action came as wharfies, seamen and builders walked off the job in Melbourne and protested outside the US embassy. In 1966 the Seaman’s Union publicly refused to sail cargo ship the Boonaroo.

The Australian Council of Trade Unions was pressured to adopt an anti-war position, but it also warned that it would not sanction union action to prevent supplies reaching troops in Vietnam.

Save Our Sons announced their opposition to the war right from the onset and organised several vigils and demonstrations. In some places they had strong links to the labour movement, so when five SOS members were arrested for distributing “Don’t Register” leaflets, workers shut down the Port of Melbourne in protest and thousands attended a vigil. The women were released after 11 days.

Perhaps the clearest example of the war’s early support came in the 1966 Federal Election. Though the ALP walked a fine line between opposing Menzies whilst supporting the American alliance, it did campaign strongly against the war in the lead-up to the vote.

Menzies and the Liberals would win in a landslide, however, and this led many to blame the ALP’s opposition to the war for their crushing defeat.

Activists responded by adopting more militant and confrontational protest tactics. But far from alienating the activists this helped to spark debate and helped sway public opinion in the movement’s favour.

In 1966 students in Melbourne organised a sit-in during a parade and the tactic caught on. The most famous example of this was during American President Lyndon Johnson’s visit to Australia in October 1966. There, students organised a sit-in in front of the President’s motorcade, creating a huge media shitstorm and immortalising NSW Premier’s Atkins comment that they should just “ride over the bastards”.

But the most controversial protest came in the middle of 1967 when students in the Monash Uni Labour club voted to set up a committee to collect funds for the National Liberation Front of Vietnam.

For the right-wing, this was an action equivalent to treason, not only opposing the war but actively “aiding the enemy”. The university’s attempt to ban the collections, far from intimidating students, galvanised them into action, turning the debate into one of civil liberties and the right to oppose the war.

But more importantly, the radicalism of the aid campaign shifted the debate towards the left and outside the “respectable” avenues of mainstream society. 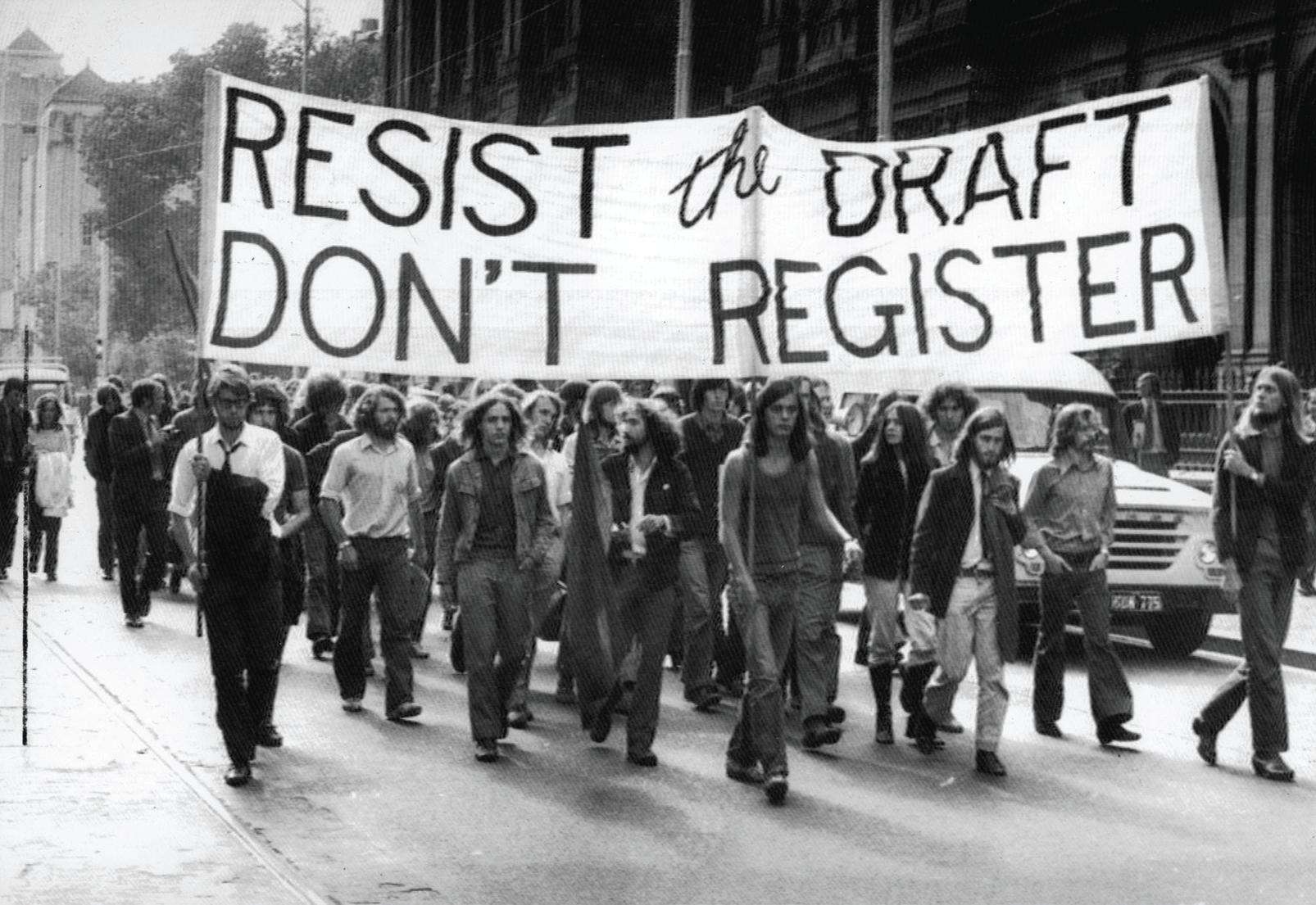 As Albert Langer, a student radical from the time, described, the debate shifted so far that it was no longer good enough simply to oppose the war, rather, “being a radical in the moment meant collecting funds for military. Being a moderate meant opposing the war and collecting funds for medical aid”.

By the end of 1967 both militant trade unionists and a number of students had done some considerable work in building up an active campaign, and though they were still a minority, they had begun to slowly turn public opinion.

With 1968 came the “Tet Offensive” launched by the National Liberation Front of Vietnam. This changed the way people perceived the war effort and meant many now saw that the anti-war movement had been right. As Hall Greenland, a student activist at the time, describes:

“Up until then the troops had been pouring in, the bombs were raining down, the body count was all over the place, and there was this imperialist triumphalism about what they were doing in Vietnam and how they were winning.

“That propaganda was pumped out all through 1966 and 1967 claiming the Viet Cong were being smashed to pieces. And then suddenly the resistance is occupying every major city and town in South Vietnam. In some places it took months to get them out.

“People just realised that they’d been lied to and that the war wasn’t being won and that there was something else going on which they needed to look at and think about. And the movement took off here and in the US.”

Student protests stepped up, with a famous protest outside the US embassy in Melbourne on 4 July that saw thousands battle mounted police well into the night.

Many unions were pushing to take a more prominent anti-war stance. The Rebel Unions of Victoria, which represented two-thirds of the unionists in the state, publicly stated that:

“We encourage those young men already conscripted to refuse to accept orders against their conscience and those in Vietnam to lay down their arms in mutiny against the heinous barbarism perpetuated in our name.”

By the end of 1968 only 49 per cent of Australians supported continued involvement, with support falling throughout 1969.

Stop work to stop the war

The high-point of the struggle were the Moratorium marches of 1970. Far exceeding the expectations of organisers, around 200,000 people came out to march against the war around the country—100,000 of those in Melbourne.

The slogan of the Moratorium was “Stop work to stop the war”. As socialist historian Phil Griffiths describes:

“The Moratoriums were the most important industrial actions. They were huge demonstrations against the war, but they were also strikes. Between a half and two-thirds of people at the weekday rallies were workers. They drew everyone in.

“I was working at a conservative high school at the time of the second Moratorium in 1970. Around half the teachers struck. That feeling fed into everything. In 1969 the government jailed a Communist Party union official for refusing to pay a fine for organising a strike. One million workers struck-in the middle of a war-and forced the government to release him and scrap the law against trade unions.”

However, there were initially tensions in the union movement over the Moratorium, with the ACTU leadership split over whether to support it. This was refected in State councils, with Victoria, NSW and Tasmania voted not to support the Moratorium.

This deadlock reflected tensions over the appropriate role of trade unions, and whether they should take up political issues. The strongest support came from the 26 Rebel Unions that had broken from the Victorian Trades Hall Council a few years before, who actively opposed the war and also the idea that trade unions should only be used for industrial issues.

For a social movement to be successful orientating to working class militancy is crucial. This is because when workers take action it not only disrupts the day-to-day functioning of the capitalist state but actively impacts on profit and production.

Though militancy amongst students and several smaller unions was successful in winning over public support, to actually win the fight it was necessary to go further and push for strike activity amongst a wider layer of workers.

In doing so, this signalled to the government that unless troops were withdrawn strike action could increase and become more widespread. Thus, in December 1971 Liberal Prime Minister John Gorton announced all troops would be withdrawn, forced by both NLF resistance and the anti-war movement.

The movement had won, not only in forcing the withdrawal of troops but in giving birth to a new revolutionary left that would take part and shape future struggles in the coming decade.

The fight against the Vietnam War shows how militant actions can change public opinion and bring about wider radicalisation in society.

Starting from a small minority, the movement grew until it was able to win over a layer of workers that could take action that would directly impact on the government and the bosses.

As we continue in our fights today, it offers rich lessons in how campaigning and radical protest action can open up debates and shift public opinion, to help build movements that can win.