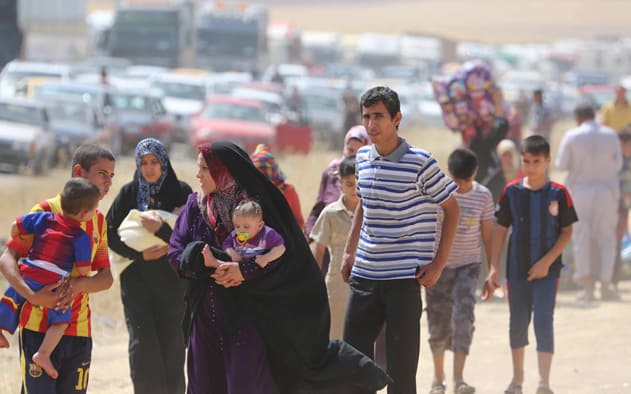 The dramatic capture of Iraq’s second largest city, Mosul, by sectarian extremists is the direct product of the US occupation and its imposition of divide-and-rule sectarianism.

A succession of smaller towns also fell in June as fighters continued to march toward Baghdad.

In nine years of occupation the US spent an estimated $1 trillion on its war in Iraq. The real cost was up to a million deaths, and a country destroyed and divided.

Much of the media coverage has portrayed the offensive by the Islamic State in Iraq and Syria (ISIS), a Sunni Muslim extremist group, as a product of the war in Syria.

It fact its growth in Iraq is the direct result of the US policy of stirring up sectarian divisions to impose control. Its successes also suggest it has been joined by local Sunni militias.

Before the US occupation, inter-marriage between Sunnis and Shiites was common, and they mixed and prayed together in the same communities.

But in the face of a growing Iraqi resistance movement against the occupation from 2004, the US encouraged political parties and militias based on Iraq’s Sunni, Shia and Kurdish groupings.

The US armed rival sectarian militias that carried out a wave of terror. This was designed to undercut the growth of any united national resistance movement.

It was eventually able to co-opt a number of Sunni tribal groups to support the occupation through the “Sunni awakening” movement, based on promises of inclusion in the Iraqi government and a share of state resources.

Nouri al-Maliki, whose government was established under the occupation, has become a vicious Shiite sectarian who has targeted the Sunni Muslim population in particular. Sunnis have been effectively excluded from the government.

Maliki has refused to spend the country’s oil wealth rebuilding infrastructure shattered by the war in Sunni areas. Thousands have been arbitrarily arrested and tortured. When a non-violent Sunni protest movement against Maliki developed in late 2012, the government responded by killing dozens of people.

According to Iraq analyst Michael Schwartz, “As the government has escalated its repression of these protests, what is essentially a guerrilla war has developed.”

These resentments have provided the space for ISIS to expand its influence. But, according to Schwartz, “most often it is not the dominant force in any locality”.

The Iraqi army in the north simply disintegrated in the face of attack, abandoning uniforms and weapons to ISIS. This reflects the impact of divided sectarian loyalties inside the army. Up to 30,000 soldiers simply turned and ran in the face of the assault. This is a huge embarrassment for the US, which invested billions of dollars to train and equip the army.

Iraq now faces the frightening prospect of a full-scale ethnic civil war. Senior cleric Ayatollah Sistani has called on Shiites to take up arms against the Sunni rebellion.

The Kurds in Iraq’s north have also seized the oil-rich city of Kirkuk, which they have long hoped to set up as a Kurdish capital, after government troops there abandoned their posts.

It also threatens to draw in the major regional powers. Shiite Iran has sent 2000 initial troops into Iraq to prop up Maliki’s government.

ISIS has received backing from Sunni states such as Qatar and Saudi Arabia as a proxy against Iran and its allies.

US President Obama has responded by talking up the prospect of a US military response, which Tony Abbott has already promised to back. While Obama has ruled out sending large numbers of troops back to Iraq, Maliki is pressing the US to call in airstrikes.

This is a supremely arrogant response from the people who created this nightmare in the first place.

Some have claimed that US troops were responsible for holding back the sectarian civil war until they left. But as Simon Assaf pointed out in Socialist Worker, “The violence peaked in 2007. So did the US troop deployment in the country, numbering 166,300 soldiers in October 2007.”

“This puts pay to the lie that the US held in check the sectarian war.”

US military support for the Shiite government will do nothing to reduce the sectarian tensions that produced this crisis.

The violence in Iraq today is the direct result of the 2003 invasion.

Second World War was no defence of democracy