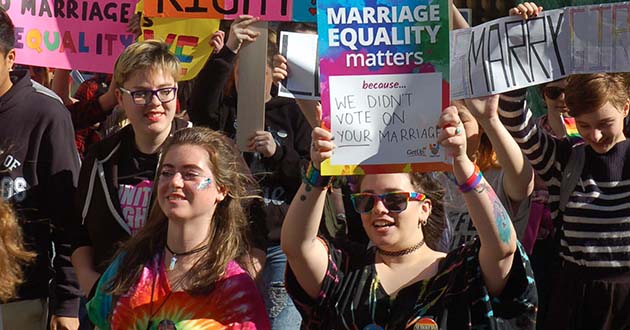 The Liberals’ move to hold a postal vote on equal marriage has dramatically exposed Malcolm Turnbull’s hypocrisy. There is simply no need for it. Every poll shows that there is overwhelming public support for equal marriage—and that support has been increasing steadily.

Parliament should vote on the issue without further delay. Instead Turnbull has tried everything possible to appease the homophobes in the right-wing of the Liberal and National parties.

But the stance of the equal marriage campaign, which rejected the push for a plebiscite a year ago, combined with the overwhelming mood that the time has come for equal marriage, has driven him into a corner. Faced with a revolt inside his party, with MPs threatening to cross the floor to vote for equal marriage, Turnbull has opted for a face-saving ploy.

For years, the Liberals have opposed a “free” parliamentary vote for equal marriage. They still do.

Like Tony Abbott’s proposal to have a plebiscite, the postal vote is yet another delaying tactic. It remains offensive and discriminatory to demand LGBTI people submit their relationships to a test of public approval. The postal vote will give cover to the worst of the homophobes in the Coalition. Like the previously proposed plebiscite, it gives the right another chance for a mass campaign of lies and homophobia.

The postal vote is worse than a joke.

Turnbull rejected a postal vote for the Republic in 1997, saying, “The voluntary postal voting method… is likely to ensure that not only will a minority of Australians vote, but also that large sections of the community will be disfranchised.”

The whole exercise is fraught. A number of Liberals who oppose equal marriage, like Tony Abbott and Eric Abetz, have said that they will vote against equal marriage in parliament, regardless of the postal vote outcome. Others, like Scott Morrison and Mathias Cormann, have said they will “respect” the outcome of a vote—whatever that means. Even the Labor Party is going to allow its MPs a conscience vote, which means some Labor MPs could vote against.

While public support for equal marriage is overwhelming, a low turnout could distort the result. Young people in particular will be disadvantaged, since they are more likely to move house or spend time overseas, and therefore miss the chance to take part in the ballot. And around 80 per cent of young people support marriage equality.

The enthusiasm for equal marriage could have been turned into a fight for a parliamentary vote instead of being channeled into a postal vote. By accepting the postal vote so quickly, Labor and The Greens gave Turnbull a way out of his predicament. If they had rejected the postal vote and the equal marriage campaign had called protests following its announcement, Turnbull could have been forced to a vote in parliament.

But despite the same reservations that led the equal marriage campaign to reject the plebiscite, many groups have thrown themselves into campaigning for the postal vote. Tens of thousands of people have already registered to vote, and there is every reason to expect a clear majority in favour. But the postal vote has even less legitimacy than the plebiscite. If there is a “No” vote, the campaign will need to go on the offensive to push for a parliamentary vote.

There are even technical problems with the postal vote. The government has opted to have the Bureau of Statistics run the vote, not the Electoral Commission, in the hope it can survive a court challenge.

It means the government cannot even call it a “vote”; the whole exercise is a “postal survey”.

There is still hope that Turnbull’s “survey” ploy will be struck down by the High Court. If that happens, Turnbull will be under even more pressure to call the parliamentary vote. But the campaign will also need to organise further protests against Turnbull and push Liberal MPs to cross the floor and side with Labor, Greens and independent MPs.

The High Court will hear the case against the vote on 5 and 6 September, in time to make a decision before ballot papers are sent out on 12 September. In Sydney, a rally and march has been called for 10 September. If the ballot is off, the march will be ideally placed to step up the fight against Turnbull.

Bill Shorten and the Labor Party, as well as The Greens and marriage equality campaigners across the board are already out calling for everyone to register to vote, or update their postal address by 24 August, as part of campaigning for a “yes” vote.

But the yes campaign will need to do more than get people onto the electoral roll and get the vote out. Voting, at any time, is largely an individual and atomized act. Postal votes are even worse.

We need a collective and active response. Large, public demonstrations can show the massive support for equal marriage and generalise the fight against homophobia, transphobia and Turnbull, taking up issues like Safe Schools. The $120 million the Liberals are wasting on the postal poll could be used to fund services and jobs.

The “yes” campaign will need to confront the wider homophobia that surfaces during the campaign, not just talk narrowly about the right to marry. Lyle Shelton, leader of the Australian Christian Lobby, has already disgracefully denigrated the children of same-sex couples as a “stolen generation”. Former Liberal MP Bronwyn Bishop has compared equal marriage to bestiality and polygamy. Protests could target Tony Abbott, the “No” vote champion, who claims the vote is about defeating “political correctness”.

We need to be prepared to keep mobilising on the streets regardless of the outcome of the postal vote, to push back the homophobes, and make sure that the parliamentary vote happens.
A win for marriage equality will be a blow against Turnbull and against homophobia.
The enthusiasm for voting yes is an indication of just how far public opinion has shifted. We need to galvanise that enthusiasm to make sure that the campaign continues the fight against every aspect of oppression and discrimination.