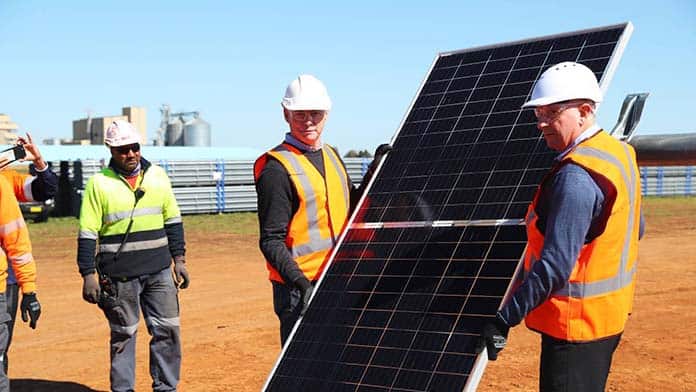 NSW Liberal Energy Minister Matt Kean has announced a new “Energy and Infrastructure Roadmap” that will create a series of new renewable energy zones (REZs) across the state.

Kean claims the scheme will attract $32 billion of investment and construct 12GW of new generation and 3GW of energy storage before 2030. This would shift the bulk of NSW energy production from coal-fired power stations on the coast, to REZs inland.

Greenpeace and WWF issued press releases praising the scheme and both the Nature Conservation Council and School Strike for Climate encouraged supporters to write in and congratulate the Coalition government.

However, while a shift away from coal is urgently needed, this roadmap is not a victory for the climate justice movement. Indeed, the central policy paper and proposed legislation does not discuss the climate crisis at all.

There is no commitment of public money to build new renewable infrastructure. The scheme is designed to provide “certainty” for energy companies looking to make massive profits out of renewables.

This leaves our climate future hostage to corporate profitability and does nothing to provide well-paid, secure jobs or a just transition to a decarbonised economy.

Decades of privatisation and deregulation have left the NSW energy system fragmented and in crisis, while pushing power prices up to amongst the highest in the world.

Four out of the five major coal-fired power stations in NSW are set to shut down in the next 15 years and there is currently no coherent plan to replace them. This is a major problem for capitalism in NSW and is the stated motivation for the roadmap.

These power stations and the transmission grid they feed into were all built by the NSW government and were once publicly owned.

If energy was still in public hands, planning and building new renewables to drive a just transition away from fossil fuels could be much more easily achieved.

Instead, as in much of Australia, the market regulator currently guarantees huge profits for all the major private operators, none of whom take any responsibility for avoiding climate catastrophe or maintaining the long-term viability of the system.

Wind and solar are not being embraced by the Liberals because they drive down carbon emissions, but because they are now by far the cheapest and quickest way of building new energy generation capacity.

Kean’s scheme creates a new financial body that will act as an intermediary between generators, distributors and the network operator.

It promises big returns for all the corporate players looking to invest in renewables while also creating new financial products that will fuel speculation on the energy market.

No certainty, no justice

Many companies are currently lining up to cash in on the renewables gold-rush.

Key to the NSW scheme are “reverse auctions”, with companies competing to pledge the lowest price for long term energy production contracts.

“Reverse auction” schemes were designed in Europe on the premise that the private sector could lead investment in renewables. But they have not delivered—global renewable energy investment is only at one third of the level needed to keep warming to 1.5 degrees. New investment in Europe has declined below 2012 levels, even before the pandemic hit.

Reverse auctions elsewhere have also led to underbidding and bankruptcies among participating companies, and a “race to the bottom” on wages and conditions.

Already, the Electrical Trades Union (ETU) has highlighted the shocking conditions that exist on many new solar and wind farms, where rates of unionisation are very low.

There is no justice in Kean’s transition—no mention of the needs of workers and communities currently reliant on fossil fuel production or the Aboriginal people whose lands have been destroyed by coal.

Successful amendments by The Greens in the upper house now require Kean to develop “guidelines” for consultation with Aboriginal people whose lands will host renewables, but there are no actual rights created by the legislation and it will take a fight to shift this beyond tokenism.

The Liberals’ focus is to shift energy generation to Renewable Energy Zones in rural areas around Armidale and Dubbo. This make a just transition for energy workers in places like the Hunter Valley very difficult. The government has said that it will encourage local manufacturing, but only “where they are cost competitive.”

Labor and The Greens successfully moved amendments to Kean’s legislation to create Illawarra and Hunter-Central Coast REZs. There is a hard struggle ahead to make this a reality however. These areas will face challenges as they have not been identified in the national Integrated System Plan for the electricity system—itself a very narrow market-based process.

There is no proposal to create a public Authority (like the LaTrobe Valley Authority or the Just Transition Authority that Labor talked of before the last election) to lead planning and investment for a transition.

The Liberals and Labor voted against Greens amendments to stop all new fossil fuel power stations. This scheme also leaves the door open for new gas-fired power stations to be built in the REZs.

Plans for new transmission infrastructure to the Central-West REZ formed part of an agreement between the NSW Coalition government and Morrison earlier this year, which also pledged to massively increase gas production in NSW.

Rather than praising Kean, the climate movement needs to continue fighting for urgent, large-scale public investment in renewables, driven by the needs of communities and the environment—not big corporations.