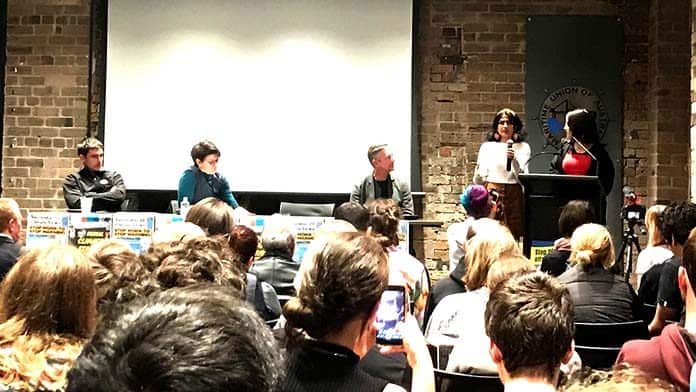 Unionists are gearing up to join the next Strike for Climate on 20 September. This time school student strikers are calling for adults to join the mobilisations too. Greta Thunberg, the Swedish student who initiated the global strike movement, announced in May that “to change everything, we need everyone. It is time for all of us to unleash mass resistance”.

Over 100 unionists, workers, and students met in Sydney on 10 July to discuss building workplace support. The meeting was hosted by the Maritime Union of Australia (MUA) Sydney branch with the support of the National Tertiary Education Union (NTEU). School striker Daisy Jeffrey told the meeting, “we really need adults now to join us”. The School Strike for Climate group has already put out a number of resources, including a “worker participation guide” detailing how to build support in workplaces.

The call from the students has already been taken up across a number of union branches, with motions passed in NTEU branches at UTS, Sydney University and UNSW calling for “the widest possible stoppage of work and study to attend demonstrations on this day”.

NTEU Sydney Uni Branch secretary Kurt Iveson told the meeting that the union’s NSW division, “has endorsed the action and called on all branches to hold member meetings over the next month where climate strikers would address our meetings and we would discuss what actions we were taking to build the strike”.

As Kurt put it, getting behind the action in March, “meant credibility for the union and built our power because there were people who participated who weren’t the usual suspects”.

In Victoria, the NTEU has also supported it at a state-wide level, with a motion passed by the Victorian Divisional Council. The MUA Sydney branch has passed a motion welcoming the call from school students, and similarly declaring the union’s intention to build for the, “widest possible stoppage of work”.

Under current Australian industrial law strikes around political issues are illegal. So the effort to strike for the climate also highlights our restrictive anti-strike laws and the need to win the right to strike.

But unions have defied the law in the past, and there are also other avenues for organising walk offs. Vice-Chancellors at both Sydney Uni and UTS were pushed into declaring that all staff and students were free to attend the last Climate Strike in March without penalty.

As Kurt explained, the situation at Sydney Uni meant, “There were lots of small conversations in corridors and in work units like ‘what does it mean if we walk off’ that were really important in politicising the event”.

The hope is to repeat this for an even large campus mobilisation this time. At the July meeting 25 NTEU members from across Sydney held a working group meeting to discuss plans, alongside groups for other unions.

Demanding fair jobs for workers in renewable industries is central to building the strike in workplaces.

Speaking about her experience meeting with unionists, school striker Daisy noted, “what we’ve really discovered and want to address is the concern for fossil fuel workers. We need this transition into renewable energy but it’s important we don’t leave these workers behind… For the climate activist community it’s one of the things that’s been dismissed in the past.”

“I wasn’t in that job because I enjoyed working with fossil fuels; I was in those jobs because of the conditions… that was all fought for by the MUA over many years… When it comes to talking about transition the moral argument is an easy one. We’ve got to fight to get solid union jobs and union conditions and back projects that are going to do that”.

In a significant step for building solidarity with maritime workers, School Strike for Climate put out a statement in support of workers at DP World on strike at container terminals across Australia, stating: “it is the same unjust rules driving the climate crisis which are also hurting workers and it’s time to turn them around.”

Support for the strike is growing in other areas too. Activists in the music industry have launched a “Sound Strike”, encouraging musicians to pledge to strike on the night of 20 September. Over 120 musicians have already signed on.

The last Sydney climate strike far exceeded expectations, and the next is forecast to bring out over 60,000 students. While anti-strike laws remain a serious roadblock, a mood of excitement in the campaign both here and overseas is brewing. For workers to use industrial power to stop climate change, not just in September but going forward, bad laws will need to be broken.

Stop the NSW police crackdown on protest—solidarity with Blockade Australia

A police crackdown on climate activists linked to Blockade Australia has seen over 35 people arrested in a fortnight.

The energy market chaos and soaring power bills boost the case for a rapid transition to renewable energy.

The federal election result was a cry for climate action.