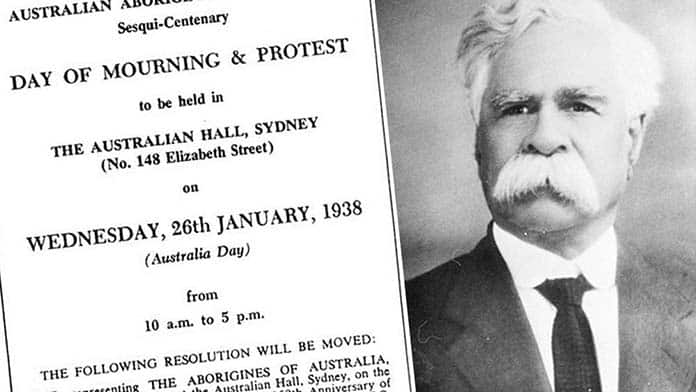 The Black Lives Matter movement has exposed the ongoing racism and discrimination in both the US and Australia.

There is a rich history of resistance to racism here. One of the first political movements for Aboriginal rights in Australia was established by Aboriginal activist William Cooper when he helped found the Australian Aborigines League in 1934.

The AAL built a strong base of support for Aboriginal rights in the labour movement and many churches. This was at a time when Aboriginal people were widely considered to be inferior and lived under the dictatorship of so-called “Protection Boards”.

Cooper and the AAL fought against daily discrimination and championed economic equality and full citizenship rights. They also articulated the demands of a colonised people fighting back, for the return of land and for self-determination.

Cooper was born in 1861 in Yorta Yorta country near the confluence of the Murray and Goulburn rivers, and the NSW-Victoria border.

Colonisation saw the Yorta Yorta dispossessed of their lands and their population reduced by 85 per cent due to disease and violence.

The Yorta Yorta were relocated to the Maloga Mission on the NSW side of the Murray River in 1874.

By 1888, they had moved to Cummeragunja, meaning “our home” in the Yorta Yorta language.

The land was granted to them as a result of pressure from the community for their own blocks of farm land.

In 1881, the community had formulated demands for, “a sufficient area of land to cultivate and raise stock… that we may form homes for our families… and in a few years, support ourselves by our own industry.”

This, they argued, would be just compensation because, “all the land within our tribal boundaries has been taken possession by the Government and white settlers”.

These demands were finally granted after Cooper, along with other Yorta Yorta men, signed a petition to the Governor in 1887. Cooper also wrote to the local MP, requesting a plot of land for himself.

Cooper’s letter explicitly called on the government to grant him the land as a, “small portion of a vast territory which is ours by Divine Right”.

While, as Historian Heather Goodall points out, Cooper used the language of Christianity, to which he had recently been converted, he based his request on Aboriginal rights of prior ownership to the land.

The Yorta Yorta managed to create a successful pastoral community. But in 1907, this was attacked by the newly formed Aborigines Protection Board, who seized control of the land from Aboriginal families and forced them to work it for the Board’s profit.

From 1908 onwards, there was constant confrontation at Cummeragunja.

Many residents were expelled on disciplinary grounds and Cooper seems to have been among them. He managed to earn a living through the 1910s and 1920s as a shearer, drover, horse-breaker and rural labourer across several states. During this period, he was a member of the Australian Workers Union and acted as a spokesperson for local Aboriginal people.

Historian Richard Broome summarises the racist controls on Aboriginal people during this period:

“First, control was exercised formally by Aboriginal boards acting under special legislation, which incarcerated people on reserves, managed their daily lives and work, fragmented families, and denied them civil rights. Second, a blatant genetic racism, against Aboriginal people based on their skin colour – separating those who could attend school, those who were removed and preventing Aboriginal people from entering areas that white people could.”

The racism and poverty Cooper and others from Cummeragunja experienced ignited a new movement for Aboriginal rights.

In 1933 Cooper left Cummeragunja, because residence on the reserve made him ineligible for the pension. At the age of 72, he moved to Melbourne.

Cooper became the secretary and motivating force behind the Australian Aborigines’ League (AAL), made up largely of exiles from Cummeragunja. He drew important support from fellow Christians, but there were also close connections between the AAL and the labour movement, including socialists in the ALP and the Communist Party.

Working alongside Cooper was fellow Cummeragunja exile Shadrach James, who in the late 1920s had been elected Secretary of the Goulburn Valley Food Preservers’ Union and vice-president of the local Trades and Labour Council.

In September 1933, there was a major national campaign against continuing frontier violence in the Northern Territory led by the radical labour movement and supported by union and church leaders. Cooper took this moment to launch a petition to the King that highlighted nationwide oppression.

This requested, “royal intervention to prevent the extinction of the race”, better conditions and federal parliamentary representation. The petition was circulated in Melbourne and across reserves in NSW.

The AAL’s immediate aim was the ending of all discriminatory practices against Aborigines, in “civic, political and economic” spheres. They demanded:

“Full Citizens Rights to all Aboriginals, whether living on settlements or not. This is to include the payment of sustenance, as to Whites for all unemployed Natives. We claim the right to work for full wages or the payment of dole for those unable to work”.

These economic as well as political demands were central to its definition of full citizenship rights.

Cooper’s demands were always framed by the broader injustice of dispossession, “we are entitled to reasonable comfort, merely from the fact that this land was ours, with assured living before the whites came”.

The AAL also called for the end of segregation in the NSW school system, of child removal and of the Protection Board’s power to sever Aboriginal people’s contact with kin and land by expulsion of reserve residents.

One of the most significant actions that Cooper helped organise was the Day of Mourning protest. This move towards public protest was triggered by Cooper’s anger that his letters and petitions had been ignored by the authorities.

On 26 January, 1938 the NSW Government held an official commemoration of the 150th anniversary of the beginning of colonisation.

Cooper proposed to the NSW based Aboriginal Progressive Association, involving Aboriginal activists William Ferguson, Pearl Gibbs and Jack Patten, that the day should be marked by Aboriginal people as a Day of Mourning.

They staged a protest march in Sydney followed by a mass meeting of Aboriginal people one kilometre from the Government’s re-enactment of the First Fleet’s landing. Five days later, an Aboriginal delegation met with Prime Minister Joe Lyons to present a ten-point program.

Ferguson and Patten penned a manifesto titled “Aborigines Claim Citizenship Rights!” that began: “This festival of 150 years of so-called progress in Australia commemorates also 150 years of degradation imposed upon the original native inhabitants by the white invaders of this country.”

It continued, “you took our land away from us by force. You have almost exterminated our people, but there are enough of us remaining to expose the humbug of your claim, as white Australians, to claim to be a civilised, progressive and, kindly and humane nation.”

By 1939, the situation at Cummeragunja was even worse, due to the appointment of the authoritarian manager Arthur McQuiggan. The residents sent a petition to the Protection Board demanding McQuiggan’s dismissal. McQuiggan’s response was to paste it up on the door of the station office and invite those who wished to remove their names to do so.

Cooper continued to believe that working through the proper official processes through letters and petitions to the government could deliver justice. These hopes would come to nothing.

The decision to begin the walk off from Cummeragunja was taken on 3 February 1939. The significance of this cannot be overstated. It meant walking away from the land the community had been fighting to get back for 30 years.

The strike lasted nine months. The demands of the 200 strikers eventually extended to a call for a Royal Commission, return of the farm blocks to Aboriginal families, abolition of all Board control and full citizenship rights.

The strike support campaign mounted in Melbourne was by far the largest and most organised of any yet taken by an Aboriginal body. It began as a collection of necessities. The campaign received strong backing from left-wing unions, notably the Australian Railways Union, and Communist Party members.

In September 1939, 1200 people attended a meeting at the Hawthorn Town Hall demanding Aboriginal rights. This was organised by Communists and left-wing ALP activists and addressed by leaders of the Cummeragunja struggle, who put a resolution in support of the strikers’ demands.

The strike was finally broken in October 1939, when the NSW Protection Board convinced the Victorian Government to withhold food relief to strikers and deny their children access to the local school. But the strikers refused to return to the station where McQuiggan still held control. Instead, they dispersed into surrounding areas in NSW and Victoria, extremely bitter. Although the strike appeared to have been a failure, several months later McQuiggan was finally sacked.

In November 1938 the Nazis led a pogrom in Germany where Jewish businesses, synagogues, homes and schools were destroyed, dozens killed, and 30,000 Jewish people taken to concentration camps, in what is known as Kristallnacht — the night of broken glass.

The AAL had marched in anti-fascist rallies since 1934 and was formally affiliated to the Communist-led Movement Against War and Fascism.

Now, Cooper led a march to deliver a protest letter to the Germany embassy in Melbourne.

Prominent Aboriginal activist Gary Foley argues that this was a politically strategic way to, “draw attention to the similarities between what was happening in Germany and how Aborigines were being dealt with in Australia.”

William Cooper himself argued, “We feel that while we are all indignant over Hitler’s treatment of the Jews, we are getting the same treatment here.”

William Cooper led a life of relentless struggle. He connected land rights and political struggle against racism with economic rights for Aboriginal workers and the unemployed.

Cooper’s life should be an inspiration for the Black Lives Matter movement and ongoing fight for Indigenous justice today.