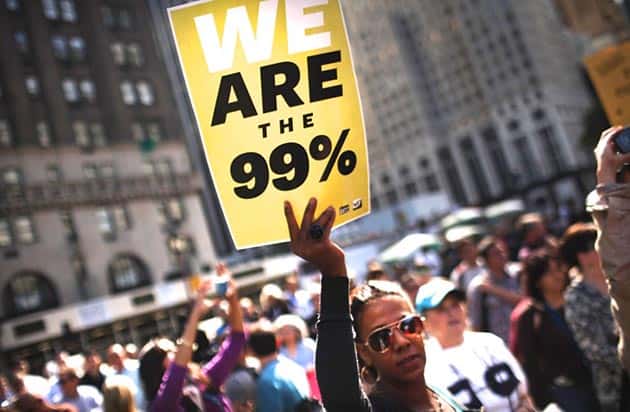 Erima Dall explains what we mean by socialism, and how a world run on the basis of human and environmental need, not competition and profit, would work

When asked for an alternative social system in a BBC interview, comedian Russell Brand answered:

Brand’s interview went viral. He didn’t have a blueprint for change, but he said what a lot of people are thinking.

We live in capitalist world of growing inequality, war and looming climate catastrophe. In Australia, the income share of the top 1 per cent has doubled in the last few decades. Globally, just 62 people own as much wealth as the world’s poorest 3.6 billion people.

The world’s major military powers have created devastating conflicts in the Middle East, yet want to turn away the millions of refugees this has created.

All this is feeding the popularity of new radical challenges to mainstream politics, such as Bernie Sanders in the US and Jeremy Corbyn in Britain. Their rise to prominence has put the idea of socialism back on the agenda, as both call themselves socialists. Their talk of affordable education, higher taxes on the rich, action on climate change, and anti-racism have excited millions of people.

But what exactly is socialism, and what would it be like?

Real socialism would be nothing like the old dictatorships in Russia or Eastern Europe. It would be based on a profound extension of democracy.

Firstly, it would require putting all the wealth in society, from control of the factories, the mines and the massive multinational companies under democratic control.

This means taking them out of the hands of the billionaires like Gina Rinehart, Rupert Murdoch and James Packer. These major capitalists are not elected, but their decisions shape the world—they create and destroy jobs and transform landscapes with high-rises, pollution and open-pit mines.

This version of socialism is quite different from the socialism of Sanders or Corbyn.

When you dig beneath the surface, what they really argue for is a more humane version of capitalism, and a compromise with the wealthy and the powers that be.

They have radical policy proposals. But unless we get rid of capitalism altogether, such reforms can always be reversed. After all, we used to have free education and a much higher corporate tax rate.

Vested interests will raise hell to stop us making change in the first place, using every tool at their disposal including the mainstream media, the police, the army and their control of major businesses to cripple the economy.

Against this power, we have to use the power of the organised working class. Workers are the people who keep society ticking over—nurses, cleaners, teachers, bus drivers, construction workers, scientists, journalists, manufacturers, cooks.

Through going on strike and halting production, they have the ability to bring capitalism to its knees.

Any major strike movement poses the question of who controls production and therefore who runs society—the workers or the old management and shareholders.

This holds the potential for a socialist revolution where workers take power.

There are historical examples of this.

Key has been the emergence of workers’ soviets (soviet means council). They first appeared in St Petersburg, Russia during the 1905 revolution. Soviets re-emerged in the 1917 revolution and became the basis of government.

These councils emerged to co-ordinated the workers’ movement across workplaces.

Under socialism workplaces will be the new centres of democratic governance. Today work is about the least democratic place there is, where we are ordered to do this or that, under the threat of the sack.

But this is because the boss has control. Yet even under capitalism we have to co-operate at work to get things done. At work an entire group of people operate as a team, according to a division of labour, like a slick machine. Sometimes we don’t even notice it.

A hospital, for example, relies on cleaners, cooks and administrators as much as doctors and nurses. Right now we are only cogs in the machine; under socialism we will be in the drivers’ seat.

Workers have the most intimate knowledge of what works and what doesn’t. Bosses like to set KPIs and enforce procedures that make no sense.

But when the internet is broken, you want an IT technician, not the CEO of Google, on the phone. When the power is out, you want electricians on the job, not AGL shareholders.

There would be mass participation in decision making based on directly elected workplace delegates. Delegates from workplaces would come together in local, national and international meetings to make decisions such as what our cities will look like, and what our school curriculums will teach.

There are many common objections to this. For example, some argue that human nature means greed, corruption and self-interest will always dominate. But humans also have a tendency towards co-operation and compassion. How else do you explain volunteer firefighters, charity, or the martyrs of the Egyptian revolution who fought for democracy, to name but a few examples.

That isn’t to say people are angels, far from it. But people’s ideas and behaviours are shaped by their conditions of existence.

Capitalism encourages a lot of awful behaviour. The greediest bank managers and mining magnates get enormous bonuses. Imagine if they were social outcasts. The worst violence is that of the ruling classes—drone strikes, bombs on Syria, detention camps. Is it really surprising we also find violence on our streets, in our pubs and homes?

Alienation and poverty perpetuate crime. And the police force make it all far worse—in the US cops killed 1140 people in 2015. This is how “justice” works under capitalism.

What we could do

There is more than enough wealth to provide everyone with running water, food, housing, public transport and renewable energy. Yet under capitalism there are 795 million people who do not get enough food for their basic needs—about one in nine people on the planet.

Socialism would allow us to put the basic needs of people and the environment first, rather than profits.

Instead of nations competing and warring for oil and geo-political control, we could share techniques and technology between richer and poorer countries and quickly solve climate change, for starters.

In a more rational society, we could all work less, and save time not having to compete for jobs. Instead we could enjoy and educate ourselves, playing music, learning languages and html code, travelling, or learning first aid.

Far from socialism crushing individuality and replacing it with sterile uniformity, it would allow individual expression and innovation to flourish.

People could live and form relations as they chose, whether that be in same-sex or straight couples, or radically different arrangements. The establishment of collective childcare and communal dining rooms and laundries is needed to abolish the gendered division of work, including child-rearing.

It will take intense struggles to break down sexist ideas – but it can be done when masses of women and men participate together in strikes and revolutionary uprisings.

The Russian Revolution of 1917 saw the most complete workers’ democracy, with all power in the hands of the workers’ councils. A socialist government took power in a major country for the first time.

Workers themselves established factory committees, turfed out managers, and took over the books. Factories set up libraries and crèches on grounds – some even added sportsgrounds and ice-skating rinks! Public lectures took place, open to all. And everywhere, people learned to read.

“The thirst for education, so long thwarted, burst with the Revolution into a frenzy of expression. … Russia absorbed reading matter like hot sand drinks water, insatiable. And it was not fables, falsified history, diluted religion, and the cheap fiction that corrupts—but social and economic theories, philosophy, the works of Tolstoy, Gogol, and Gorky”.

Tragically, over the next decade, the revolution degenerated into a bureaucratic dictatorship.

Socialism in Russia could not survive without spilling over the borders. But the revolution in neighbouring Germany was crushed.

The key leaders of the revolution including Lenin and Trotsky had long argued that the revolution needed to spread to neighbouring countries. Isolated, it was strangled through invasion, civil war and famine as the rich and powerful across Europe united to try to crush it. On the ashes of the workers’ democracy Stalin established a brutal regime.

Capitalism is global—and so must be its downfall. The growth of new movements around the world is demanding an alternative—from the ongoing strikes against austerity in Greece, the solidarity with refugees in Europe and in Australia, and the Black Lives Matter movement against police shootings in the US.

The potential exists to begin building a movement for another world.