West Papua: a rising tide of struggle for liberation 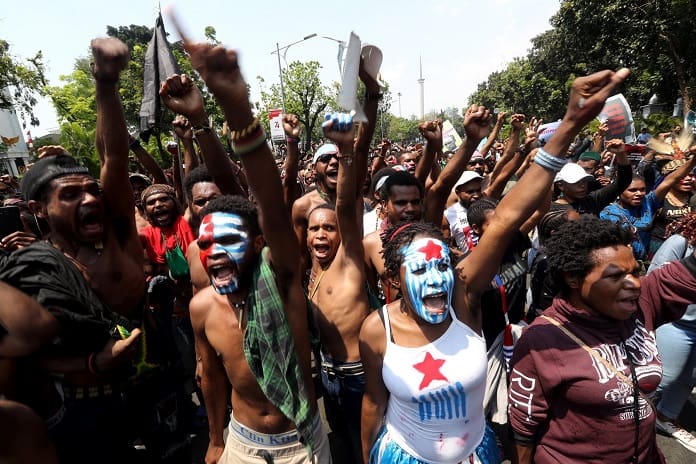 David Glanz talked to Veronica Koman, an Indonesian human rights lawyer exiled in Australia, about the fight for freedom in West Papua and the rise of a solidarity movement within Indonesia, inspired by Black Lives Matter.

The struggle of independence of West Papuan people has been going for decades since the 1950s but we are looking at new unprecedented levels of Indonesian violence since the era of the dictator Suharto (which ended in 1998).

In the past two and half years, Indonesia has deployed thousands of extra soldiers in West Papua but, at the same time, the (West Papuan) National Liberation Army is also getting stronger. That’s why we are seeing armed conflict in three regencies right now. At least 40,000 civilians have been displaced and they are all unassisted and neglected. So it’s a humanitarian crisis.

I have been seeing on social media, often through your posts, very large public mobilisations of people in West Papua. Am I right in thinking that there has been an increase in the level of struggle generally?

Yes, definitely. Thanks to the 2019 West Papua uprising, more and more West Papuan civilians have realised that there’s no other way, that it’s hopeless to live under Indonesian racist rule. We also have unprecedented solidarity among Indonesian people, which is also increasingly growing. It has never happened before and now on social media, for example, Indonesians can discuss freely. I mean, not freely but we can discuss how Indonesia is colonising, occupying West Papua. More Indonesians have realised that we need to correct Indonesian treatment of West Papuans.

Can you give us some idea of what the resistance consists of, because we’ve seen large public demonstrations but you also referred to the National Liberation Army. So what is the West Papuan resistance today?

The Papuan resistance consists of the non-violent struggle and also the armed struggle and they are very disciplined about it. The armed struggle is the West Papua National Liberation Army, one of the oldest national liberation armies in the world and they are using guerrilla tactics in the jungle. The non-violent wing of the movement is basically also getting very strong, and both armed and non-violent wings are getting more organised, more unified and getting larger—something that Indonesia will not be able to contain anymore, I think.

It shows how persistent and how determined the people of West Papua are with the demand to be free from Indonesia. I think this is where the international community including the Australians—it’s at the doorstep of Australia—must pay attention to this decades-long yearning of independence. West Papuans helped Australia during World War Two. West Papuans stood up to fight alongside Australians so it’s time for Australia to also pay attention to these people who have been suffering under Indonesian rule.

You mentioned an increasing amount of repression by the Indonesian military. What does that look like on the ground? Are we talking about shoot on sight or arrests? What is the Indonesian government doing?

Armed police and soldiers have been increasingly coming to visit schools in West Papua to indoctrinate the school children. This has led to the shooting of two teachers by the liberation army because they were believed to be undercover Indonesia soldiers. Public discussions are often being forcibly dispersed, public demonstrations as well with arbitrary arrests. Over the past one and a half years more and more West Papuans are being arrested over Facebook posts criticising Indonesian security forces and being accused of hate speech. It’s ridiculous. There’s basically no space to speak.

In late April, Indonesia labelled West Papuan freedom fighters as terrorists. So this is definitely escalating the cycle of violence in West Papua. Last night (6 May) in a city called Ilaga, the capital of Puncak regency, there was a shoot-out between Indonesian security forces and the liberation army in the middle of the town. Today, the national chiefs of Indonesia’s military police and intelligence arrived in West Papua to discuss the armed conflict situation. Many civilians have fled and they are displaced—not being assisted. Little of this is reported because West Papua is under a de facto ban for international journalists and international organisations.

This is why these displaced people are not assisted. Many displaced youth, there’s no definite number, due to their desperation and hatred of how the military operations keep repeating in West Papua have been joining the liberation army. That’s why the liberation army is getting stronger. This cycle of violence needs to be stopped through a peaceful resolution.

Given that pattern of repression that you’ve outlined, it is remarkable but very welcome that sections of the Indonesian left and progressive forces in Indonesia are beginning to speak up openly in defence of West Papua. How was that come about? Why have things shifted inside Indonesia itself?

The turning point was in November 2016. After going through consultation with the non-violent wing of West Papua movement groups of Indonesians declared their support for right to self-determination of West Papuan people. Since then these Indonesians have also been subjected to harassing surveillance, arbitrary arrests, arbitrary detention, torture but not the same scale as the West Papuans. They’re subjected to it but not as bad, I mean. But yeah, so that’s the turning point and then this group called the Indonesian People Alliance for West Papua (Front Rakyat Indonesia untuk West Papua/FRI-WP) is getting larger and larger.

And I think there’s also the influence of social media—minds can meet on social media to discuss ideas. That’s also helped, I think. And also another turning point is the Papuan Lives Matter movement last year. At the peak of the Black Lives Matter movement (in the US), Indonesian prosecutors sought up to 17 years under treason charges against Black political prisoners, the Black West Papuans, because of their role in the 2019 West Papua uprising.

Many Indonesians on social media supported the Black Lives Matter movement in the US and then some Indonesians said: “Hey, do you even know that we also have Black ‘problem’ in Indonesia, in West Papua?” And then suddenly it just exploded—people sharing news, sharing documents by NGOs about the human rights violence in West Papua. That’s in May and June, throughout June and July 2020.

I think that on a daily basis there were multiple webinars on West Papua initiated by Indonesian people and also unprecedented support by Indonesian student bodies across Indonesia at that time. Thirty-two Indonesian student bodies declared their support and called for the release of the Black Papuans on trial. The Indonesian racist court still found the West Papuans guilty, no matter what, but they were sentenced to a very low sentence. That’s 11 months in prison compared to the 17 years demanded by the prosecutors. So definitely there’s political intervention and that’s how we are still growing.

You mentioned Australia’s responsibility. The Australian ruling class has an overarching strategic interest in what they call stability across the northern approaches to Australia. For them, secure shipping routes are more important than human rights. Are there also economic interests for Australian capitalists in West Papua, are they making money out of this repression?

Yeah. Definitely and especially under the Lombok Treaty, the treaty made between Indonesia and Australia after 46 West Papuan refugees sought asylum in Australia in 2006. The Lombok Treaty, I think, is what prevents Australia from speaking out more about the atrocities in West Papua. The Indonesian government just branded the terrorist label on West Papuan freedom fighters and can send in the anti-terrorism squad called Detachment 88 special forces.

In conclusion, what would you say to workers and students in Australia? What can we do to aid this struggle for liberation in West Papua?

I think at the end of the day, despite the reluctance of the Australian government to act on West Papua, it’s the people that will create change. So let’s conduct more public discussions to really understand what’s happening in West Papua because West Papua is blocked to foreign journalists.

Hopefully we can take to the streets together when urgent situations are arising, which is very imminent. And after that, finally, also write to your MPs to raise the West Papua issue and let’s discuss Detachment 88 being deployed to West Papua. This has a direct link to Australians because it’s Australian taxpayers’ money that is being spent there.

We send our solidarity greetings to the movement in West Papua and also to progressives struggling for change inside Indonesia itself. Thank you very much for your time.

Calls for freedom grow louder amidst repression in West Papua

THOUSANDS OF West Papuans have joined demonstrations in Papuan cities and Highlands towns to demand an end to Indonesian occupation. The protests come as...

West Papua, Australian complicity and the fight for freedom

Seven West Papuans who requested asylum when they arrived in the Torres Strait have been denied the chance to make a protection application in...