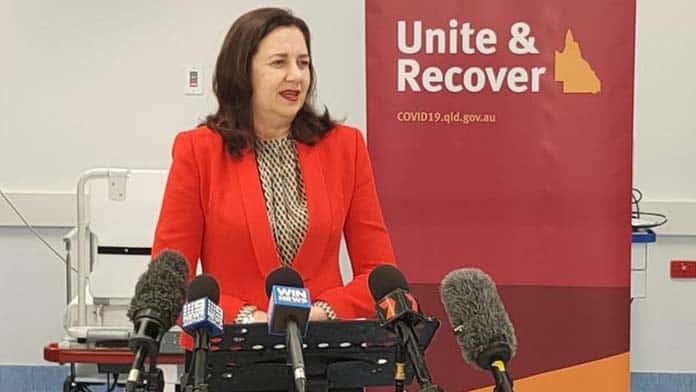 The Queensland election has handed the Labor Party a third term in government, with an increased majority. One Nation’s vote plummeted, and The Greens also took their second seat, in South Brisbane.

Annastacia Palaszczuk has led Queensland since 2015, when Labor took power in a crushing victory against LNP right-winger, Campbell Newman. While there have been some high points, like the decriminalisation of abortion in December 2018, Palaszczuk has spent her career striving for mediocrity.

Labor’s re-election campaign has been particularly marked by a Bjelke-Petersen-like Queensland parochialism, as Palaszuck positioned Labor to take the conservative middle ground from the LNP.

The central feature of Labor’s campaign was the closure of the Queensland border that Palaszczuk made central to the government’s response to COVID. Palaszczuk posed as the strong leader willing to make the difficult decisions to keep Queensland safe and strong. Palaszczuk made a point of announcing on election eve that the border would be re-opened to regional New South Wales but remain closed to greater Sydney.

The LNP’s straight out pro-business position on COVID seems in particular to have cost it votes (and seats) among older voters on the Sunshine Coast. Its pie-in-the-sky new Bradfield scheme to pipe water across the Great Divide in north Queensland also gave the LNP campaign a decidedly crank quality.

Labor’s overall conservative approach was also obvious with its hypocritical stance on climate change. In inner city seats Labor talked up policies for renewable jobs and energy, but in the mining seat of Mackay the state MP Julieanne Gilbert boasted of Labor’s approval of 18 new coal mines in Central Queensland.

Doubling down on its support for coal, Labor’s state platform committed the party to supporting the growth of the coal industry in Queensland, while also stating that it believes in strong action on climate change.

In the run up to the election, Labor made a point of announcing a royalties deal with the Adani coal mine. In its economic recovery plan, Labor has allocated $5 million for a feasibility study for a Bowen Basin export pipeline to move gas to the eastern coast.

In August, Palaszczuk announced the creation of three “renewable energy areas”, although she stressed that they were also “industrial zones and hydrogen hubs”. But even her announcement of $148 million for transmission infrastructure and $500 million for renewable energy projects will leave the state well short of its stated 50 per cent renewable energy target by 2030. Although the government has talked about the importance of public ownership of new energy projects, to date the bulk of its spending has been on privately-owned projects.

One of the notable positives of the election is the collapse of One Nation. Although it will hold the seat of Mirani, its polling across the state fell by almost 7 per cent, with most of that going to Labor and The Greens, not the LNP.

The LNP also made a last-gasp push for Townsville seats with a racist curfew policy on 21 October. Announced to supposedly clamp down on “youth crime”, the curfew was coded policy directed at Indigenous families. The proposal was to fine parents $250 if their children under the age of 14 were caught outside home after 8pm, and children between 15 and 17 outside home after 10 pm. The proposal was vigorously rejected by Indigenous, child welfare and civil liberties groups.

Labor made its own pitch for the law and order vote by announcing plans for an additional 2025 police at a cost of $624 million.

Despite running candidates in 53 out of the 93 seats, and spending millions on ads that pushed outright lies about the Labor Party introducing a death tax, there is nothing to show for Clive Palmer’s efforts to boost the LNP.

The Greens have held the inner-Brisbane seat of Maiwar, and have taken the seat of South Brisbane from Labor’s former Deputy Premier, Jackie Trad.

But a striking feature of Labor’s conservatism had been its very public animosity to The Greens. The LNP opportunistically preferenced The Greens ahead of Labor across the state. While the Greens’ primary vote in South Brisbane has been increasing since 2015, LNP preferences ensured they won the seat from Labor.

Rather than critically look at its failed policies on climate change to understand its falling vote in South Brisbane, Labor officials have instead laid the blame for its defeat on the LNP.

Palaszczuk has played politics over COVID. While she tried to make political mileage over the border closure, Queensland workers were left waiting for paid pandemic leave. In September, the Labor government offered health workers two days of “COVID pandemic recognition leave”, but that is no compensation for the government’s wage freeze that means public servants, teachers and health workers won’t get a pay rise until 2022.

The Labor Party has approved new coal mines instead of putting forward policies for a green transition, of retraining, job guarantees and sustainable infrastructure projects to create jobs.

The Palaszczuk state government represents the worst of the middle of the road, compromise, don’t rock the boat style of Labor politics that Anthony Albanese seems to be embracing nationally. With a substantial parliamentary majority, Palaszczuk could embrace investment in state-owned renewable energy infrastructure, and end the drastic rates of land clearing that are endangering the Great Barrier Reef. But don’t hold your breath.

The weekend before the election a Queensland police officer punched a protester to the ground outside the Kangaroo Point hotel where around 100 refugees are being held.

Annastacia Palaszczuk is committed to business as usual. The fight for workers’ rights and real social change will need more strikes, protests, and demonstrations.

By Griffin Davis and Ian Rintoul

Despite their enormous majority in the Queensland parliament, Campbell Newman and the LNP have followed the Victorian Liberal government to be thrown out of office after just one term.

It was an astonishing result. Despite their enormous majority in the Queensland parliament, Campbell Newman and the LNP have followed the Victorian Liberal government to be thrown out of office after just one term.

The Queensland LNP’s decision to race to the polls in January is a very calculated bid to hang onto power. The polls only looked...