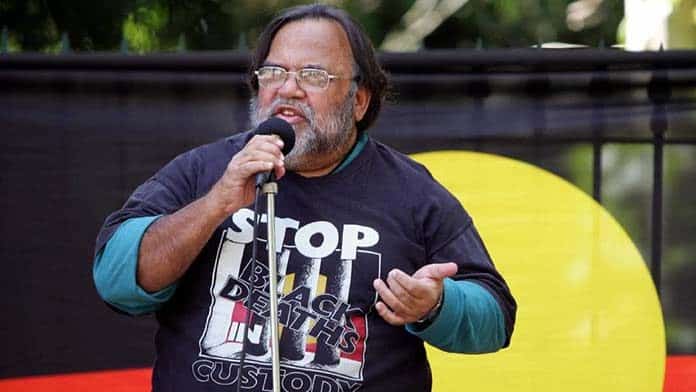 It is with great sadness that Solidarity comrades have learned that comrade Sam Watson has passed away, in Brisbane, on 27 November.

Sam has been a giant on the Brisbane and national left his whole political life. From the 1967 referendum, to the Black Panthers in Queensland, to the struggles against black deaths in custody, the protest over the deaths of Daniel Yok in Brisbane and Mulrinji Doomadgee in Palm Island, his steadfast solidarity with Lex Wotton unjustly jailed for the Palm Island uprising, and raging against the NT Intervention and the hypocrisy of Labor’s Sorry statement, Sam was a proud Wangerriburra and Birri Gubba man and fighter for his people.

Sam was also a committed socialist, centrally involved in protesting against apartheid in South Africa, marching for democratic rights against Joh Bjelke-Petersen, in anti-war marches from Vietnam to Iraq and Afghanistan, defending the MUA, and most recently at as many protests for refugee rights and against mandatory detention and offshore processing, as he could get to.

Sam argued for the Aboriginal rights movement and the trade union movement to “unite in solidarity with each other.” He was an untiring and enduring link between Brisbane’s Murri community, and the Indigenous struggle more widely, and the political Left.

We were fortunate indeed to live and fight alongside him. He will be sorely missed in the struggle for a better world that he was committed to.

Our thoughts are with his partner Cathy, his children Nicole and Sam Jr, with all his family, his people, and all comrades who mourn his loss.