US primaries shake the candidates of the corporations 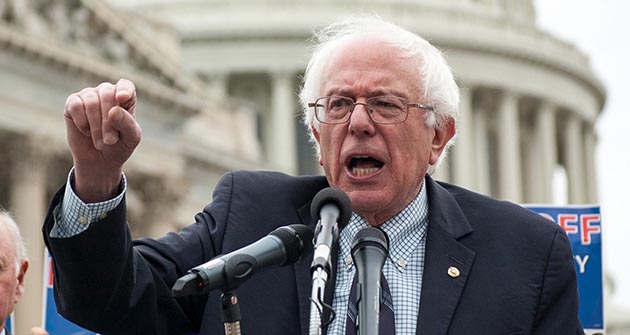 As the US presidential race gets underway, both major parties are being shaken by a revolt against the preferred candidates of the party establishment and the corporate elite.

Bernie Sanders was the real winner of the first two Democratic primaries. Six months ago he was written off as an outsider. But he won comfortably in New Hampshire with 60 per cent, after finishing neck-and-neck with Hillary Clinton in Iowa.

Sanders calls for a “political revolution” to sweep away the control of politics by corporate interests. In his victory speech in New Hampshire he declared, “we can no longer continue to have a campaign finance system in which Wall Street and the billionaire class are able to buy elections.”

The 74-year-old Senator for Vermont describes himself as a socialist and champions policies like free university tuition, government-funded healthcare and a $15 an hour minimum wage.

He has slammed establishment favourite Hillary Clinton as funded by Wall Street and big business. Her $675,000 in speaking fees from Goldman Sachs in 2013 has become symbolic.

Sanders has galvanised support from young voters in particular, winning 83 per cent of those aged 18-29 in New Hampshire, and 84 per cent in Iowa. This includes young women, despite Hillary’s attempt to spruik her feminist credentials. Over 80 per cent of women under 30 backed him in both primaries.

But it remains unlikely that he will win the Democratic nomination. The US Presidential election itself is not until November. Caucuses among Democratic and Republican supporters in each state to vote on their candidates continue until June, with a major test “Super Tuesday” on 1 March, where 15 states will vote at the same time.

Around 15 per cent of the vote in the Democratic Party is held by “super delegates”, party officeholders and dignitaries who are heavily favouring Hillary. In New Hampshire, despite Sanders’ overwhelming win in the popular vote, Hillary Clinton came away with an equal number of delegates, taking six super-delegates to Sanders’ zero.

He also re-iterated after New Hampshire his willingness to channel his support towards Hillary should she win the nomination, saying, “I also hope that we all remember, and this is a message not just to our opponents, but to those who support me as well, that we will need to come together in a few months and unite this party and this nation because the right-wing Republicans we oppose must not be allowed to gain the presidency.”

This means falling in behind one of the candidates of corporate America.

But Bernie Sanders’ support is an indication of the distrust of the US political system, and the desire for change.

He reflects the impact of movements like Occupy, and its focus on the wealth of the 1 per cent, and Black Lives Matter. Workers’ wages in the US took a beating after the economic crisis hit in 2009, while the 1 per cent increased their wealth further.

Sanders is one of a series of new left-wing figures and parties who are riding this wave of discontent, from British Labor leader Jeremy Corbyn to anti-austerity party Podemos in Spain.

This rage at the establishment is being reflected in the Republican race too, but in the success of even more reactionary and racist candidates than usual. The Tea Party movement, encouraged by Republican elders as a way of attacking Barack Obama, presented itself as a protest against the Washington elite.

The radicalised Republican base is now turning against mainstream candidates like Jeb Bush. So the two leaders in the Republican race are now the racist big-talking billionaire Donald Trump and evangelical Ted Cruz.

Trump scored a commanding 20-point victory over other candidates in New Hampshire, with 35 per cent of the vote. He was narrowly beaten by Cruz in Iowa.

Trump’s brand of right-wing populism appeals to those who have lost out from a sinking economy with his promise to “Make American great again”. His vile racist scapegoating puts the blame for this squarely on Muslims and immigrants, with a promise to ban Muslim immigration and build a 3000-kilometre wall between the US and Mexico.

This is only a more extreme version of the racism already in the mainstream. Last year 31 Governors released statements refusing Syrian refugees entry to their states after the terrorist attacks in Paris.

Cruz is a Tea party favourite who made his name as the architect of the “government shutdown” in 2013 by refusing to pass government funding bills through the House of Representatives. He is even more loathed by the Republican establishment than Trump.

More reliable servants of Wall Street and the top end of town like Jeb Bush or Marco Rubio for the Republicans and Hillary Clinton for the Democrats may still end up coming out on top. But the disenchantment with the US political system is clear.