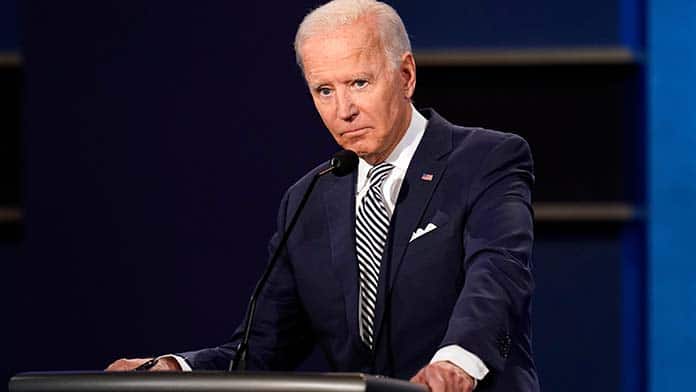 Joe Biden may have defeated Trump, but his weak position and centrist politics mean he will be unable to deal with the crises that dominate the US, writes James Supple

Donald Trump’s presidency is over, with Joe Biden finally claiming a narrow win to secure election as US President. There have been celebrations across the US at the news. But the result has only confirmed the deepening polarisation in a United States riven by crisis.

Expectations of a decisive victory for Biden and the Democratic Party were shattered, as voters turned out in record numbers for both candidates.

Trump won over ten million more votes than in his election win in 2016, despite his abject failure over the pandemic, producing the carnage of 230,000 deaths as well as spiralling unemployment, and four years of encouraging racism and white supremacists, systematic dishonesty and lies.

So close was the result that his Republican Party looks set to maintain control of the Senate, pending the outcome of two run-off elections in Georgia, and even won ground in the House of Representatives.

Biden’s establishment, middle of the road approach had little appeal for millions of Americans. His key promise was to simply restore business as usual after four years of Trump. He repeated this following the election result, declaring, “I pledge to be a president who seeks not to divide but to unify”, and “to restore the soul of America”.

But he offers no solutions to the problems dominating the lives of ordinary people.

The Democratic Party has been left stunned by its failure. “Something went wrong,” Democrat Cheri Bustos, who led the party’s campaign, told the House Democratic caucus, saying she was “gutted” and “heartbroken” at their losses.

Biden will be a weak president, at the mercy of the Republicans in the Senate as he attempts to push his agenda through Congress. Even his cabinet choices will need Republican approval.

Even before Trump, US politics had become sharply polarised between the Republicans and the Democratic Party, as the Republicans adopted ruthlessly partisan tactics in Congress and gerrymandered electoral districts to boost their numbers. Biden will face the same obstruction.

Trump has spent four years feeding polarisation and stirring up racism and nationalism.

His next move is unclear. He is continuing to deny that he has lost the election, claiming the count was hit by voter fraud and launching a series of court challenges to the results. Biden’s margins in the swing states are now large enough that this won’t change the outcome.

Some are speculating that Trump will run again for the presidency in 2024. But even if he quits the political stage altogether, Trumpism will remain a powerful force. It has a stronghold on the Republican Party and it has shown its continued electoral potency.

Trump’s claims of a stolen election will enrage his supporters and create the conditions in which right-wing protests and far right violence can grow.

Trump’s rise was a product of the bitterness resulting from four decades of neo-liberal policies, supercharged by the economic crisis that began in 2009.

Inequality has exploded at the same time as people have been forced to work harder and longer hours. The top 1 per cent’s share of income has more than doubled since 1975, while the bottom 90 per cent’s share fell from 67 per cent to 50 per cent.

Trump’s election in 2016 showed that anger at economic crisis does not automatically push workers to the left but can also feed the far right.

His success was also fuelled by disappointment with President Obama. Although Obama was elected in 2008 on promises of change and building a movement to take on Washington, he ended up defending corporations and the rich.

He bailed out the banks following the economic crisis, and presided over a recovery that saw the bottom 95 per cent of households with lower incomes in 2015 than they had in 2007, according to the Economic Policy Institute.

It was under his presidency that the right-wing Tea Party movement emerged, radicalising the Republican Party base and preparing the way for Trump. There is now a danger of an even more powerful right-wing movement emerging under Biden.

The gridlock and paralysis of the US political system is set to continue. Biden is not going to deliver change of the kind that could improve workers’ lives.

His allies in the Democratic Party are already blaming their dismal election performance on the left.

In a conference call between Democratic members of the House following the result, establishment Democrats declared figures on the left of the party such as Alexandria Ocasio-Cortez as responsible, saying, “We need to not ever use the word ‘socialist’ or ‘socialism’ ever again” and claimed a focus on “socialised medicine” and defunding the police had hurt the party’s prospects.

Biden completely distanced himself from the left during his campaign, repeatedly declaring that he had defeated Bernie Sanders in the Democratic primaries and rejected his policies.

Despite the crisis in the US health system further exposed by the pandemic, Biden refused to support a universal healthcare system, rejecting Sanders’ plan of Medicare for all.

Although he promised to break from Trump’s climate denial and spend significant amounts on climate action, he also distanced himself from calls for a Green New Deal and promised not to ban gas fracking. And he has also rejected the demands to defund the police coming from the Black Lives Matter movement.

The pro-business Financial Times has described Biden’s plans as only “mildly social-democratic”.

Biden drew in far more corporate donations than Trump, taking millions from the finance sector and big tech firms. He was the choice of those looking for a steady hand to promote US imperialist power. And his decades as part of the neo-liberal establishment in Washington gave ordinary people no confidence he would be on their side.

His devotion to the interests of big corporations will leave him hamstrung in addressing inequality and working class people’s needs.

But the polarisation of US society has also fed the popularity of socialist solutions to the crisis. The key expression of this has been Bernie Sanders’ campaigns for president through the Democratic Party primaries.

But the Democratic Party establishment easily defeated Bernie Sanders in the presidential primaries, and maintains a firm hold on the party.

Much of the left in the US fell in behind Biden’s campaign in an effort to get rid of Trump. Bernie Sanders worked to mobilise his supporters into campaigning for Biden’s election and is trying to channel activists into working to reform the Democratic Party.

This meant getting tied into defending an essentially moderate and pro-capitalist party.

Internationally, similar efforts either to take over existing parties for the radical and socialist left or build new left parties focused on winning government through elections have both failed.

In Britain, former leader Jeremy Corbyn’s effort to reshape the Labour Party into a vehicle for opposition to neo-liberalism and war is being dramatically reversed under new leader Keir Starmer. Corbyn himself has been suspended from the party as part of a witch-hunt against the left.

Elsewhere, the once radical Syriza party in Greece, elected to government in 2015 on a promise to tear up austerity, was discredited after it implemented even worse cuts than those it was elected to oppose. Podemos, a radical left party in Spain, has joined a government with the Labor-like Socialist Party.

In recent months, the most exciting developments on the left in the US have been outside the electoral process. More people participated in the Black Lives Matter protests across the US than in any other protest movement in history. The rebellion not only massively increased popular opposition to police brutality and racism, it won measures to defund the police and redirect money into social services in a number of US cities.

There are also signs that strikes are on the rise. Workers at Amazon, McDonalds, grocery stores and other companies have staged protests or gone on strike demanding COVID-19 safety measures. This follows the wave of successful teachers’ strikes that began in Republican-controlled states in 2018.

The left needs to focus on building resistance on the streets and in the workplaces in order to fight for the radical solutions needed around climate action, racism and economic justice.

The stakes are high. There is a huge gap between the expectations in Biden and what he will actually deliver as the US plunges deeper into economic and social crisis.

That’s why we need to build socialist organisation that puts building class struggle and the movement’s strength outside of parliament at the centre of its focus.