US and NATO push for drawn-out proxy war in Ukraine 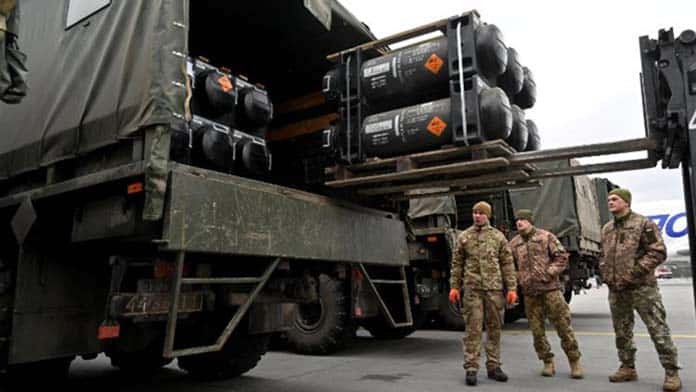 The US and NATO are waging an increasingly open, long-term proxy war against Russia in Ukraine. Finland and Sweden have announced they intend to join the NATO military alliance, adding to NATO encirclement of Russia.

All this makes a further, dangerous escalation of the conflict more likely, with Russia moving missiles capable of carrying nuclear warheads to its border with Finland.

Russia’s invasion of Ukraine was wrong but the US response makes it clear that this is essentially a war between the US and European imperialists and Russian imperialism on the other.
As the war entered its fourth month, the US Senate passed an extraordinary $US40 billion package to arm Ukraine. This brings total US aid since the 24 February invasion to more than $US53 billion.

$US15 billion of the new funding is for military equipment, training, Ukrainian Defence Force salaries and intelligence support. This absolutely dwarfs the $US650 million defence package given to Ukraine last year—at the time this was the most the US had ever given a country.

Increasingly aggressive rhetoric has accompanied the massive US commitment of arms and funds to the conflict.

Speaking in Poland at the end of April, US Defence Secretary Lloyd Austin explicitly outlined that the aim of the US is now to weaken Russia, not simply to enable Ukraine to defend itself.

When asked what he would consider success in the war, he said that he wanted “Ukraine [to] remain a sovereign country, a democratic country, able to protect its sovereign territory”.

But he then went further, adding he wanted to see “Russia weakened to the degree that it can’t do the kinds of things that it has done in invading Ukraine”. He said that Ukraine could win the war with “the right equipment” and the “right support”.

The message is that the US and NATO now want to ensure Ukraine defeats Russia in the break-away Donbass and Luhansk regions and may even go as far as supporting a bloody conflict over the Crimea annexed by Russia in 2014.

This is a recipe for a vicious and drawn-out conflict. Russia has now defeated the last Ukrainian forces in the port city of Mariupol, giving it a crucial land bridge to Crimea.

The US and NATO are willing to extend the war and the destruction to achieve their aims. A Ukrainian news outlet, Ukrayinska Pravda, reported that British Prime Minister Boris Johnson used his April visit to Kyiv to pressure President Volodymyr Zelenskyy to end peace talks with Russia.

In the same month, The Times reported that British SAS troops had been training Ukrainian soldiers in anti-tank warfare in Kyiv.

The information was provided to The Times by two officers from separate battalions stationed in and around the capital.

Part of the context for the US and NATO enthusiasm for war is the wider and much more serious imperialist rivalry with China. CIA Director Bill Burns underlined the way the fight against Russia is being used to set an example that will help deter China over Taiwan.

Speaking to the Financial Times in May, Burns said China was looking “carefully at what lessons they should draw” for Taiwan, was “unsettled” by the West’s mobilisation against Russia and that this was “affecting their calculation” over Taiwan. He said China was the “biggest geopolitical challenge we face over the long term as a country”.

The wider imperialist rivalry with China has driven Australia’s aggressive stance on the conflict. Albanese ousted Morrison at the election, but the warmongering and massive military spending will continue.

Before the election Albanese sought to display his pro-war credentials by calling for the expulsion of Russian diplomats.

Ukrainian ambassador to Australia Vasyl Myroshnychenko has said Albanese will be invited to Ukraine shortly and promised that Ukraine would continue to buy Australian coal and uranium.

The Australian government will send Ukraine a further 20 Bushmaster armoured vehicles as well as 14 M113 armoured personnel carriers. The $60 million bill takes Australia’s total contribution to the bloodbath to over $285 million.

The entrenched proxy war in Ukraine makes anti-war action in NATO countries, Russia and here in Australia more important than ever.

On 9 May there were anti-war protests across Europe. On 20 May there were strikes by transport workers across Italy, protesting government involvement in the war.

This follows strikes by transport workers in Italy and Greece, disrupting NATO arms shipments to the warzone.

It is this kind of anti-war action that can throw a spanner in the wheels of the war machine.

US sees chance of Russian defeat in Ukraine and ramps up...

The war between Russia and Ukraine continues to drag on with no end in sight.