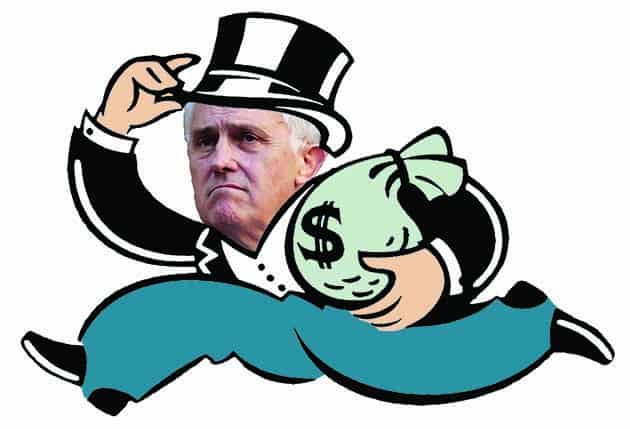 The wheels have come off Malcolm Turnbull, as he fumbles, stumbles, and slides in the polls. Newspoll has the Liberals behind Labor at 51-49 for the first time since Turnbull became PM. Turnbull’s personal approval rating is in freefall, with just 38 per cent approving of his performance.

New Matilda has counted 17 Turnbull backflips in seven months. As Tony Abbott enjoys popping up to remind us, “the Turnbull government is running on the Abbott government’s record”.

After toying with plans to increase the GST, Turnbull backed off for fear of public outrage.

His plan for changing the funding deal between the Federal government and the states went nowhere. His announcement of a “once in a generation reform” to give state governments the power to set the level of income tax was dead within days, after state Premiers roundly rejected it.

Turnbull’s efforts to clean up the mess left over from Abbott’s funding cut to hospitals and schools reassured nobody. He has restored perhaps a third of the money that Abbott cut between now and 2020 from hospitals. But there was nothing at all to compensate for the $30 billion reduction in schools funding over ten years.

To make matters worse, he floated the idea of the Federal government ending the funding of government schools altogether, and leaving responsibility with the states.

But at the same time he promised the Federal government would still fund private schools—making it clear his priorities lie with the rich and privileged.

With steelmaker Arrium set to go under, threatening 7000 jobs across the country including over 1000 in the South Australian town of Whyalla, Turnbull offered nothing to save the jobs.

The last year has seen a raft of bank scandals, from the Commonwealth Bank losing hundreds of millions of customers’ money through botched financial planning, denying life insurance payouts to critically ill claimants, and interest rate rigging by ANZ and Westpac.

But when Labor raised the prospect of a Royal Commission into the banks, Turnbull was having none of it. Treasurer Scott Morrison labelled it a “reckless distraction”. Yet several Coalition backbenchers disagreed, publicly backing the idea.

Turnbull wants to fight the election on union bashing and “living within our means”, and says Labor’s plans for modest increases in spending on schools and hospitals just aren’t affordable. Last year, the big four banks made a combined profit of a staggering $30.5 billion, yet Turnbull is talking about cutting corporate taxes.

Treasurer Scott Morrison says the government’s focus is still to “get…expenditure under control”, meaning more cuts are likely in the budget on 3 May.

Education Minister Simon Birmingham has hinted at increases or changes to student fees.

The Liberals have also flagged lowering the repayment threshold on student debts, so that students start paying them back when they begin earning $42,000 instead of the current $54,000. This amounts to increasing tax on relatively low-income earners.

This is a government totally committed to the interests of big business and the rich.

It’s now clear that Turnbull can be beaten. But that can’t be left to opinion polls and Turnbull’s gaffes, or electing a Labor government. There has to be a fight.

Instead of the union leaders going along with the administrator’s restructuring proposals at Arrium’s steelworks, there could have been a fight for the jobs and demands on Turnbull to nationalise the company.

The union leaders need to plan an active campaign against the threat of the ABCC. Turnbull has outsmarted The Greens by using the constitution to recall parliament to vote on his anti-union bills. But strikes and protests at the opening of Parliament on 18 April could have made it clear that the ABBC will be fought with industrial action.

When Turnbull unveils his plans in the budget, we need a response like that that met Abbott’s first budget in 2014. This means protests and demonstrations against the Liberals’ agenda, and demanding they tax the corporations, banks and the millionaires to fund universities, schools and hospitals.

The revelations in the Panama Papers of the scale of the greed and tax avoidance of politicians and the global rich have sent shockwaves around the world (see p9). Demonstrations have brought down Iceland’s Prime Minister. Britain’s Prime Minister David Cameron is under pressure, as are politicians in Pakistan, Ukraine, Russia and Argentina, as well as the King of Saudi Arabia.

The Panama Papers are just a small glimpse of the hypocrisy, corruption and greed that characterises world capitalism. Malcolm Turnbull is the local representative of that global 1 per cent that imposes austerity to protect the profits and wealth of the super rich. We need to toss Turnbull out and fight the system that he represents.