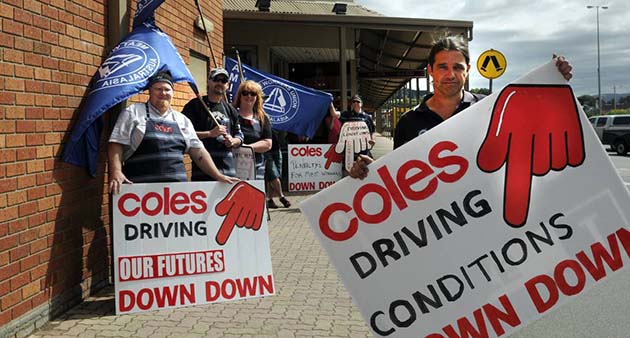 Australia’s biggest companies are raking in profits while keeping their workers some of the lowest paid in the country.

McDonalds, Coles, Woolworths, Big W, Kmart, Bunnings and Target have all signed agreements with the shoppies union, the SDA, that undermine penalty rates for weekends and shifts.

In the midst of a long-running business campaign against penalty rates that has made it an election issue, a Coles trolley worker and the Meatworkers’ union successfully challenged the agreement between Coles and the SDA in court in the Fair Work Commission.

Workers have been paid penalty rates lower than the workplace award. Under the Fair Work Act, an agreement has to mean workers are “better off overall” than under the award rates. Fair Work found that the Coles-SDA agreement failed the test.

Coles took $70 million a year out of the pockets of its workforce—a whopping 77,000 workers were worse off.

Their workforce is predominantly casual or part-time, and female.

Coles has responded by continuing to refuse to pay penalty rates, instead reverting back to a previous agreement. Wesfarmers, which owns Coles and Bunnings, is Australia’s biggest company. They made $2.44 billion profit in 2015.

The spotlight is now on a number of dodgy agreements that undermine penalties. We spoke to a young worker at McDonald’s who is also paid through an agreement with the SDA.

Under the award, McDonald’s workers would get penalty rates of 25 per cent on Saturday, 50 per cent on Sunday, and more for casuals.

Yet Victor, 18, doesn’t get any penalty rates at all, unless he works between 1am-5am, when he gets a 10 per cent loading. “I mostly work in the café making coffee, but also work in all stations. I get paid $17.65 an hour, inclusive of casual loading,” he explained. If he was working full-time, the wage would be $14.23 an hour.

According to McDonalds spokesperson Chris Grant, “We’re a 24-hour, seven-day-a-week business and our employees tell us they love the flexible working hours.”

But Victor, who does four to five shifts a week, averaging 25-30 hours (on top of full-time study), doesn’t see it that way.

“You’d have to be in denial of the obvious reality that working weekends remains unsociable and inconvenient…penalty rates are as justified as they have ever been. Even if Australia is transitioning to a 24/7 economy, why it is expected that minimum wage earners like us should have to bear the proportionally large cost?”

He has to work on weekends, as he studies Monday to Friday. “[I’m] consistently working Saturdays and Sundays. For me, penalty rates would be the difference between being able to live independently in a share accommodation rather than being dependent on my parents … I’ll be at university for five and a half years, and I really can’t rely on that support for that long.”

Now, under pressure, the Coalition’s line is they will respect the decision of a Fair Work Commission ruling on penalty rates.

Labor is promising to protect penalties, but they too have promised to accept a Fair Work Commission ruling, regardless of the outcome.

Some trade union leaders, including ACTU President Dave Oliver, have defended this, and the SDA’s deals. They are the biggest union affiliate to Labor.

Rightly, a Greens’ proposal to legislate to guarantee penalty rates has won the support of some union officials.

According to Victor, “If Labor wants to continue positioning itself as the party for workers, it needs to have their needs in mind … they can’t make exceptions for the lowest paid workers employed by one of the most profitable and largest corporations in Australia.

“Penalty rates, amongst the other workers’ rights achieved through the labour movement were [won] by protest … I hope Labor would continue that fight and stand in solidarity for McDonald’s workers, regardless of any ruling by FairWork.

“The workers’ fight for $15 in the US is an international inspiration for me. I think that people like me have to put pressure on politicians and on McDonalds, either with or without the SDA.”