Teaching consent won’t counter the sexism all around us 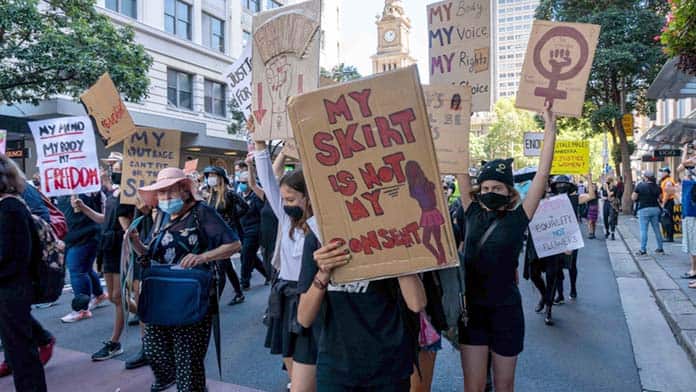 The testimonials on the website confirm the pattern of elite private school students enacting debased and brutal sexism against girls.

The degradation, humiliation and objectification of women in our society have deep roots. Teachers cannot cut those off with classroom consent lessons.

The mass social reckoning with the deeply embedded sexism in Australia will be wasted if it is spent scrutinising what teachers are doing (or failing to do) in the classroom; the true culprits of the sexist system, including the Liberals, are well practised in deflecting accountability for deep social inequality by blaming teachers.

Teachers know that young women want students to be taught authoritatively that they have a right to determine their own sexuality, to be respected and to feel unashamed and safe as they develop sexual relationships.

In public schools across Australia we are already supposed to do this all through school until Year 10. Teachers in private schools should also be supported to teach against sexism. But unless the movement confronts the social and political inequalities that drive rape, our “Respectful Relationships” messages ring hollow.

When we teach about the inequalities experienced by women and the prevalence of harassment and sexual assault against women, we are contradicting the most powerful people in our political system.

It is our word against Christian Porter’s, whose brief denial to the PM is the only investigation required into the sexual assault he was accused of, and Linda Reynolds’, who gets to keep her job as Defence Minister despite covering up a rape in her office.

Shockingly sexist ideas are legitimate in mainstream politics. Parliament is notoriously sodden with sexist slurs, which are thrown about while conservative politicians vote for sexist policies, like defunding domestic violence services and dismantling the Family Court.

Still more influential to our students is the mainstream trade in sexism in the film and music industries. Serial rapist Harvey Weinstein has gone from Hollywood but the industry he captained is still saturating screen time with gender stereotypes.

It is utterly confusing to so many women, let alone teenagers and children, that women’s right to sexual freedom has collapsed into our right to participate in sexual commodification. Cardi B and Megan Thee Stallion claimed a victory for sex positivity and female empowerment with the chart-topping WAP music video but they are cashing in on the same old objectification of (Black) women’s bodies and sexuality.

WAP and music videos, ads, films and games like it scandalise conservatives who are hypocrites and prefer the exploitation of women’s sexuality to be conducted in private. But they have the endorsement of liberal feminists, whose horizons are limited to the expressions of sexuality available within capitalism.

WAP and the like tell young men and women that women’s confident sexual expression happens as a money-making performance, not an authentic, dynamic, human relationship.

The commercialisation of sex is so deep that it is even implied in the legalistic, contractual terms we have to use to talk about stopping rape and assault. Ideas of a clear-cut “negotiation” during which “consent” for sex is obtained from the woman reflect an alienated, individualised conception of sex and rape.

The testimonies recorded on Contos’ Teach Us Consent website show that the rapes and assaults are occurring in a social context, not just in the individual act of sexual violence. The young women refer to incessant “slut shaming” and the pressure to be a disinterested, sexually attractive body; to be sexually available, but not too much.

They write of being stripped of agency and self-worth even before the parties begin. They drink to feel free of that anxiety and are then abused by boys they had trusted. The humiliation continues after the rape; either ignorance or bonding and status-building for the boys; isolation, shame and confusion for the girls who feel like they were responsible and won’t get any support.

Focusing on the negotiation of consent is a misguided technical fix, as if the problem causing rape is a communication break down between individuals, not the disastrous, predictable consequences of social inequality.

Sexism at home and work

While teachers try to convince our students to conduct respectful relationships, our own lives are organised and degraded by sex discrimination in the most fundamental ways.

Students and teachers go home to families that are also organised around gender inequality. The triple burden, where women are working, caring for children and maintaining an appearance of sexual attractiveness, is driving women mad with anxiety and depression. COVID notoriously amplified this problem.

To undermine us further, the Prime Minister fomented the campaign against Respectful Relationships lessons by saying it “made his skin curl” and didn’t meet his values for his own daughters. He accused teachers who acknowledge transgender students of being “gender whisperers”.

The campaign by The Australian and the Liberals against the LGBTI program Safe Schools had a chilling effect on teachers’ confidence to teach about valid ways of expressing a sexuality outside of traditional gender roles.

The tightrope that teachers are supposed to walk between conducting open, explicit discussions about sex and sexuality on the one hand, battling the sexist ideas our students are fed by our ruling class on the other, and at the same time not triggering the conservative backlash is yet another triple burden for a majority female workforce to bear.

The tens of thousands of women and men who marched against the sexism in Parliament have enough collective power to take the fight to where it belongs: conservative politicians, the industries of sexual objectification and the bosses who benefit from pay inequality and women’s unpaid labour.

Women leading those struggles builds their own confidence and dents the conservative common sense about subservience that is still being reinforced by the Liberals and the system.

Teachers are part of that fight but our lessons in the classroom will really hit home when we are part of the struggle for power and control over our own lives, as working women and men.