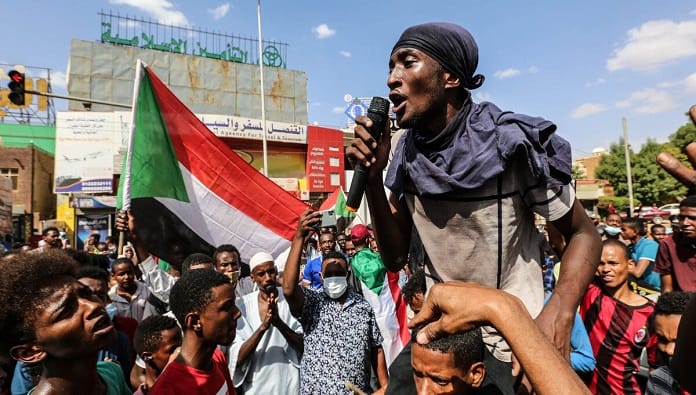 On 25 October the Sudanese military seized power from the transitional government, attempting to reverse the gains of the revolution in 2019. General Abdel Fattah al-Burhan declared a state of emergency, dissolved the government and arrested Prime Minister Abdalla Hamdok.

But the power grab has been met with a huge wave of protests and strikes that have declared “revolution until victory”.

Sudan’s military and security forces have a history of murderous repression. Bashir, the former dictator, was charged with genocide by the International Criminal Court for his role in mass killings in the Darfur region. During 2019, 100 were reported killed in a single crackdown on protest.

The popular response to the coup has been incredibly courageous. The country has been rocked by protests, civil disobedience and strikes.

On 30 October tens of thousands took to the streets across the country, reviving chants from 2019 such as, “We are revolutionaries, we are free, and we will go the distance.”  In Khartoum and Omdurman protesters chanted “revolution, revolution” and “Give it up, Burhan”.

The protests were called by the union federation, the Sudanese Professionals Association, and the Resistance Committees. Both organisations were at the heart of the 2019 revolution.

Security forces have responded with beatings, arrests and killings and tried to stifle the protests by shutting down the internet. Since the coup at least 14 have been killed and 300 wounded.

Revolutionaries have refused to be intimidated. On 7 November they declared two days of strikes and civil disobedience across the country.

In the days leading up to the strike, protesters amassed bricks and concrete to build barricades across Khartoum. Some hospitals have been shut down by the strikes and many shops are shuttered. School teachers occupying the education ministry building for Khartoum State were attacked with tear gas and 87 arrested.

The Sudanese Professionals Association has again been at the heart of the mobilisations, saying on Twitter, “The Sudanese people have rejected the military coup,” and declaring that with the military there could now be “no negotiation, no partnership, no legitimacy”.

The new revolt holds the possibility of deepening the revolution. In the fight ahead it will not only be vital to reject any compromise with the bloodstained military forces, but also any return to the neo-liberal and pro-imperialist policies of the transitional government itself.

In 2019, the Forces of Freedom and Change (FFC) led the revolution as an umbrella group for different sections of the movement. But its leaders channelled it into the failed compromise with the military.

And before the coup, discontent with the transitional government was growing. In June it began to implement a package of IMF-backed “economic reforms” that included the cutting of fuel subsidies and floating the Sudanese currency. This helped drive an increased cost of living and an inflation rate of 400 per cent a year.

Securing IMF financing also meant bowing to US pressure to normalise relations with Israel. In April the Sudanese cabinet dispensed with a law dating back to the 1950s that imposed a boycott on the Israeli state.

The US has condemned the coup and called for a restoration of the transitional government. But to avoid the mistakes of the past, the struggle against the military must be fused with demands that represent the interests of workers and the poor—for wages, union rights, women’s rights and food supplies. Deals with Sudanese capitalists and Western imperialism cannot solve the crisis in Sudan.

The power for real revolutionary change lies in the streets and workplaces. Mohamed, an activist speaking to Socialist Worker from Khartoum said, “We are drawing on our experience of 2019 when the sit-ins showed we could set up structures that were both a form of protest and a form of running our lives ourselves.”

“Disobedience committees” are organising protests and daily life amid the revolt—from food distribution, to medical needs, communications and repairs to people’s homes.

This kind of control from below needs to fuse with the strength of workers organising and striking in oil fields, airports, schools, hospitals and universities. Workers and the poor need to take control of their workplaces and run them themselves.

An uncompromising revolutionary movement in Sudan can appeal for solidarity to workers and the poor all across the Middle East and north Africa.

Over 100 people have been murdered in a soaring wave of brutal attacks on Sudan’s revolution.

A revolution in Germany 100 years ago this month rocked Europe’s rulers. Tomáš Tengely-Evans looks at how the revolt put workers power on the agenda across Europe.

Can workers run the world?