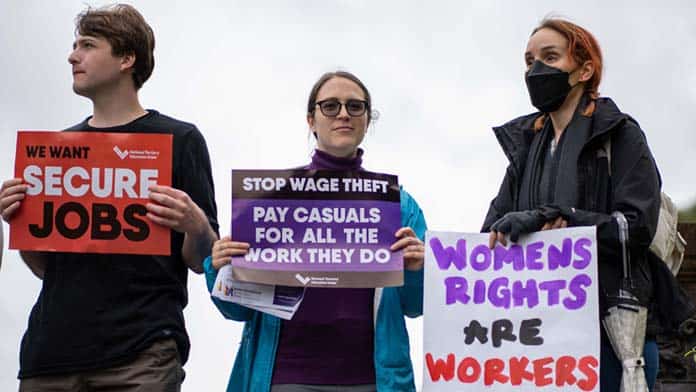 A 48-hour strike saw Sydney University almost completely shut down on Wednesday and Thursday this week, after a meeting of over 300 members of the National Tertiary Education Union (NTEU) voted to strike.

“This is one of the best strikes we’ve had at the University of Sydney since I’ve been here,” NTEU NSW Secretary Damien Cahill, declared after the first day.

Hundreds of staff and students formed picket lines over the two days at over half a dozen entrances to the main campus – as well as, for the first time, at the separate Conservatorium of Music. Other unions also lent their support, including MUA members who joined picket lines and ran a BBQ on the second day of the strikie.

Despite the university’s claims that “most classes will proceed as normal”, the campus was deserted, as picket lines turned back staff, students, and cars from 7am each day. There were particularly strong contingents representing departments including Gender and Cultural Studies, Education, Philosophy, and Linguistics.

A “roaming picket” involving groups of students travelled across campus to the small number of classes that were still being held in person. The aim was to convince students that their tutors and lecturers were undermining efforts to improve the quality of their education, through a conscious decision to break the strike and cross picket lines. Some had forced their students to attend with threats of academic penalties.

Three classes were shut down with a number of staff abandoning them, and in another ten students decided to walk out.

This success was the result of the tireless work of staff and students in the weeks leading up to the strike, with NTEU members leafleting at the gates every morning and over 80 motions passed in classes to support the strike.

The union’s ability to pull off a 48-hour strike as its first action in bargaining shows the depth of the anger among staff after two gruelling years since the pandemic began.

More than 40,000 university staff have been laid off nationwide as university administrations used COVID as an excuse to cut costs.

With many staff working from home and classes online, as well as the union leadership’s effort to agree to cuts to jobs and conditions through the Jobs Protection Framework, have all made organising resistance more difficult. It was only once the union at Sydney Uni began to take action through a protected action ballot that staff began to get more organised.

The strike also comes at an important time, just over a week out from the federal election.

As Damien Cahill told a rally during the strike, “The Coalition government has been waging war on universities ever since it was elected. In the latest budget, the government has projected an 8.5 per cent further cut to university funding over the forward estimates.”

Sydney University Vice-Chancellor Mark Scott was appointed on an enormous $982,800 pay packet last year, the same year 80 casual staff lodged a claim for $2 million in stolen wages. If this is representative of casuals across the Faculty of Arts and Social Sciences wage theft could be as high as $64 million in this one faculty over six years.

“We are striking for job security, for an end to casualisation, for rights at work, for First Nations justice, for trans leave, for protection of the vital nexus between teaching and research so that teaching is done by knowledge creators,” NTEU Branch President Nick Riemer explained.

“We have a series of really ambitious claims about the creation of permanent jobs for long term casuals who have been working regular hours for years at this university who deserve respect for the essential work that they perform,” Finola Laughren, a casual staff member in Gender and Cultural Studies, said.

Casuals make up a shocking 52 per cent of the university’s staff. Including staff on fixed-term contracts, that percentage balloons to a total of 74 per cent of staff in insecure work.

The union is also demanding enforceable quotas for First Nations employment, and annual gender affirmation leave. This was the first strike in Australian history fighting for demands around transition leave.

This strike sets a very strong example for NTEU members at other universities across the country who are also entering bargaining.

Recent months have seen nurses and teachers, transport workers and aged care workers all take strike action. This is the kind of action that can help drive out Scott Morrison, win a real wage increase and turn back the university bosses’ casualisation agenda.

It will be strike action that can force any future Labor to actually deliver change and boost funding after 21 May. A fighting union movement is the key to tackling the rising cost of living.

Another strike at Sydney Uni is likely on 24 May, with the union meeting again next week to ratify the decision after a further report back from a bargaining meeting with the University. Riemer told strikers, “We will be back here, if we have to, on 24 May twice as strong, twice as loud, twice as determined”.

Key to the success of the next strike will be convincing more union members to engage in building activities such as daily leafleting sessions and recruiting their non-union colleagues to the NTEU. Reports are that ten new members are joining the union each week. This number can increase with active recruitment in the aftermath of the successful strike.

Member-led initiatives such as the Casuals Network, which meets weekly and attracts both professional and academic staff from across the university, must continue. In-person meetings such as these bring new people into activity, build confidence and create a sense of unity among the workforce while also strengthening member-led strike organisation.

Building on the success of this week and stepping up the strike action is the way to win.

Labor’s IR bill is no solution for low-pay crisis

If we want pay rises that at least match rampant inflation, it will take strike action to win them. And effective strike action involves breaking the industrial relations laws, not begging for their reform.