Sanctions on Russia will punish ordinary people, not Putin 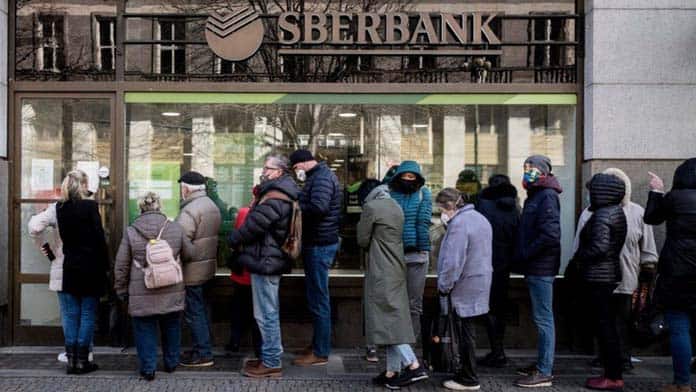 Western powers have imposed crippling economic sanctions against Russia over the invasion of Ukraine.

With Scott Morrison screeching his condemnation of Putin for the TV cameras, Foreign Minister Marise Payne said Australia was determined to impose a “high price” on “those responsible for, and complicit in, Russia’s war on Ukraine”.

They make it sound as if Putin and his inner circle are their targets but most of the pain will be borne by ordinary Russians, who had no say in the invasion and who suffer from the censorship and brutality of the Putin regime.

The West claims the sanctions will encourage ordinary Russians to rise up against Putin. But they are just as likely to strengthen nationalism and support for his regime.

Putin will blame the West for the suffering inflicted on the Russian people and present his government as the only force able to stand up to it.

Sanctions imposed after Iraq’s invasion of Kuwait in 1990, for instance, strengthened Saddam Hussein’s control of the country and hatred of the West. US and Western sanctions have been imposed on many other countries including Iran, North Korea and Cuba but have never toppled these regimes.

The main sanctions imposed by the European Union, Britain, the US and Canada, supported by Australia, are:

•  The removal of the most important Russian banks from SWIFT, the financial information service that underpins the movement of money around the world

•  Bans on the selling of goods that have a potential military or paramilitary use. That could include almost anything: clothing, vehicles, construction materials.

The attack on the Russian financial system is aimed at wrecking the entire Russian economy. A recent White House press briefing explained the strategy: “The rouble is in freefall, and soon you’ll see inflation spike and economic activity contract.”

As the rouble, the Russian currency, fell sharply in value, Russians lined up at ATMs to withdraw foreign currency until it ran out. The Central Bank doubled the interest rate to 20 per cent.

The attack on the Russian financial system means that the country and many of its major corporations will not be able to pay interest on its foreign currency loans, nor raise new loans. It will make every international transaction harder, if not impossible.

The US Government’s plan to deliberately smash the living standards of ordinary Russians was made clear at a briefing in the White House in January, which pointed out that in 2014: “When we imposed sanctions that are far less severe than we’re contemplating now… Inflation spiked to the mid-teens. Interest rates were hiked on an emergency basis to the mid-teens. That collapsed real purchasing power. That collapsed real consumption and investment. And Russia ended up with a meaningful recession.”

The sanctions have to be seen for what they are—a declaration of economic war on an imperial rival; not an attempt to stop the invasion of Ukraine. As the White House officials said, they aim to “undercut Putin’s aspirations to exert influence on the world stage”. This is NATO’s real agenda; the Ukrainian people are the meat in the sandwich, brutally squeezed by both great powers.

After the announcement of the financial system sanctions, there was an immediate impact on global commodity markets. The price of food, globally, had already risen around 80 per cent during 2020-2021 due to the pandemic. Russia and Ukraine produce about a quarter of the world’s wheat. Now the price is spiralling upwards again.

It will be the world’s poor who pay for this as wheat and bread become unaffordable for tens of millions of people.

But even greater horrors face us if NATO is able to keep these sanctions in force.

Sanctions have frequently led to actual, shooting wars. The sanctions put on Iraq by the US and its allies crippled the Iraqi economy and caused mass starvation. Medicines were cut off after the refrigeration and transport they required were sanctioned. Around half a million children died in a decade.

And the end result? America fabricated a charge that Saddam still had weapons of mass destruction, and used that as the excuse to invade in 2003.

Even more significantly, sanctions were the trigger for the Pacific War between the Japanese empire and the American empire, which started in December 1941.

The two empires were competing for control in China. The US government tried to force Japan to pull back from seizing territory that the Americans wanted to dominate. When they refused, the US blocked the export of aviation fuel to Japan, leaving them with the choice of surrender or war. Pearl Harbour was the result.

The appalling sanctions imposed by the US and NATO, backed by Morrison, could easily drive Putin to escalate or start a wider war as the only way to avoid economic and political collapse. Putin’s first response was to put his nuclear weapons on high alert.

Such a wider war could be the ultimate catastrophe for humanity, and all life on planet earth.