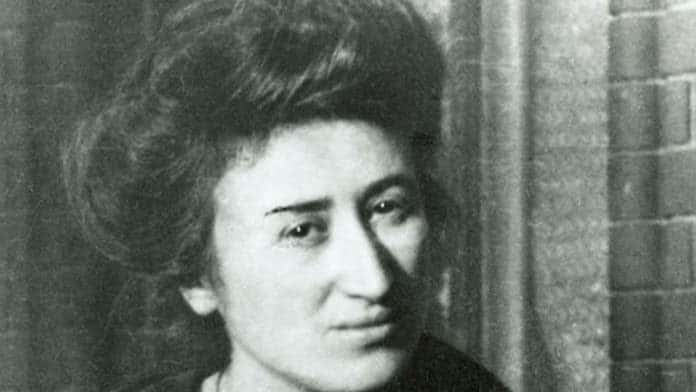 Rosa Luxemburg defended the need for revolution to end the horrors of capitalism, and her ideas were tragically confirmed by the outbreak of world war, argues Sadie Robinson

One hundred years ago in January right-wing paramilitaries killed the revolutionary Rosa Luxemburg—on the orders of a reformist, social democratic party.

Her murder, along with that of her comrade Karl Liebknecht, was part of a drive to stop a workers’ revolution in Germany.

Luxemburg was an uncompromising revolutionary whose writings developed Marxist ideas.

She saw that the self-activity of the working class was the key to transforming society. She fought against those who argued that socialism could come about through reforms in parliament.

And as left reformist parties across Europe backed up their rulers in the First World War, she continued to fight for international socialism.

Luxemburg was born in in 1871 to Jewish parents in Poland. She became politically active while still at school and joined her first political party, the Proletariat, aged 16.

Luxemburg later split from Proletariat, opposing its support for Polish independence from Russia, and formed a new group.

She was jailed for “insulting the Kaiser” in 1904 and for “inciting violence” in 1906. She later spent three and a half years in prison for opposing the First World War.

Even as a young woman in a new country, Luxemburg didn’t back away from challenging more established socialists.

She was one of the first to grasp the threat of reformist ideas after joining the Socialist Democratic Party (SPD). It was the largest socialist party in the world, with up to a million members, and many of its leaders had worked directly with Karl Marx and his collaborator Friedrich Engels.

The party was formally revolutionary and claimed still to adhere to Marx’s ideas but in practice it was reformist and focused on parliamentary change.

An open row burst out when SPD member Eduard Bernstein argued that capitalism had moved away from crises and would progress towards a fairer society. Luxemburg opposed this argument.

She said the growth of capitalism wouldn’t end competition between bosses. Instead these battles would be waged on a more destructive scale.

Luxemburg argued that those who choose reform over revolution weren’t looking for a “calmer, more tranquil path to the same goal, but a different goal altogether”.

For her, socialism was a “necessity”. This didn’t mean Luxemburg dismissed fights for reforms.

She saw mass struggles for reforms, including strikes and demonstrations, as key to preparing workers for revolution as they developed their ideas, experience and confidence.

Luxemburg was shaped by the 1905 revolution in Russia, where striking workers set up their own councils.

These workers’ councils were alternative organs of political power, far more democratic than a parliament.

Previous revolutions weren’t based on economic struggles, but capitalism had brought state and economic power closer together.

Some saw economic and political battles as separate. In The Mass Strike Luxemburg argued that they are part of the same class struggle.

“Every fresh victory of political struggle is transformed into a powerful impetus for the economic struggle,” she wrote.

She described mass strikes as “the living heartbeat of revolution, and its most powerful driving force”.

And the political impact on workers who take part was “the most precious thing, because it is the most enduring”.

Just as Luxemburg refused to compromise on her commitment to revolution, she also refused to cave into nationalist warmongering.

All the major left parties across Europe, except the Bolshevik party in Russia and the Bulgarian and Serbian social democrats, backed the First World War in 1914.

Luxemburg said the war exposed capitalism as “wading in blood and dripping with filth”. She denounced social democracy as “one of the best supporters of imperialism”.

Attitudes to the war reflected theoretical differences about the nature of capitalism, and were linked to the argument about reform or revolution.

SPD reformists such as Karl Kautsky argued that capitalism would become more peaceful. He said some capitalists would oppose war due to the waste of spending on arms.

Luxemburg argued that imperialism, competition between states for power and new markets, was key to capitalism. That meant there could be no capitalism without war.

Many of Luxemburg’s ideas have been distorted over the years.

For instance, some argue that she saw socialism as inevitable and shunned organisation in favour of workers’ “spontaneity”.

But her celebration of workers’ self-activity didn’t mean she thought revolutionaries should passively wait for them to take action. Luxemburg repeatedly urged revolutionaries to intervene in struggles.

She argued that capitalism “gives us the preconditions” of socialism. But she said it will not come about “without our conscious interference, without the political struggle of the working class”.

Others focus on Luxemburg’s criticisms of the Bolsheviks. She celebrated the October 1917 revolution in Russia as “the salvation of the honour of international socialism”.

But she criticised the Bolsheviks for disbanding the Constituent Assembly, which was supported by liberals and bourgeois forces, to instead back workers’ councils.

However, her experience of the German Revolution led her to see that calls to protect bourgeois institutions were an attempt to stop workers’ rule.

Reformists in Germany argued for a National Assembly to oversee the running of society. Luxemburg said the assembly was a “counter-revolutionary fortress erected against the revolutionary proletariat”.

She wasn’t without flaws. Her hostility to nationalism meant she didn’t support fights for national liberation by oppressed groups that could weaken the imperialist powers.

Luxemburg rightly saw that workers built up experience and revolutionary consciousness through their own actions. But she also saw revolutionary organisation as a “process” that could be built during revolutionary periods.

In contrast, the Bolsheviks argued that a socialist organisation had to be established and rooted in the working class in order for revolution to be successful. They were proved right.

Revolution broke out in Germany in October 1918, but Luxemburg and others didn’t set up the Communist Party (CP) until January 1919. She became one of its key leaders.

The newly-formed CP was very small with barely any members in major workplaces.

Its programme argued that the CP could not take power without the support of the majority of the working class.

But the party was inexperienced.

The same month, right-wing Social Democrats went on the offensive. A group of influential workers in Berlin were provoked into calling for the overthrow of the government.

Luxemburg had previously opposed this, arguing that the vast majority of workers across Germany would not yet support it. But other CP members went behind her back and supported the call, and once events were in motion Luxemburg eventually did too.

In Russia, the Bolsheviks had been strong enough to successfully argue against a premature rising in July 1917.

The Russian revolutionary Leon Trotsky later wrote that, in Germany, “absent was a centralised revolutionary party with a combat leadership whose authority is universally accepted by the working masses”.

Luxemburg paid for this with her life. The workers’ councils set up in November 1918 in Germany hadn’t seized state power. They’d handed it back to the SPD government.

The SPD, while being reformist in practice, could sound very left wing and used radical rhetoric. There needed to be an organised pole of attraction of revolutionaries to win more workers away from it and to revolutionary politics.

The SPD worked with the old generals to organise a new paramilitary force, the Freikorps, to smash the revolution. SPD leader Friedrich Ebert ordered the Freikorps to destroy the CP.

Luxemburg was captured on 15 January 1919. She was tortured, shot in the head, and her body thrown into a Berlin canal. Many Freikorps soldiers later joined the Nazis.

The horrors of fascism and war bore out Luxemburg’s argument that capitalism faces a dilemma—“socialism or barbarism”. And she was right to argue that only revolution could bring about a socialist world.

Luxemburg warned, “It is an insane illusion to imagine that the capitalists will submit good naturedly to a decision by a socialist parliament to give up their property, profit, privileges, and their right to exploit.

“The imperialist bourgeoisie would rather turn the country into a smoking heap of rubble than voluntarily give up the system of wage slavery.