Robots, universal income and the future of work 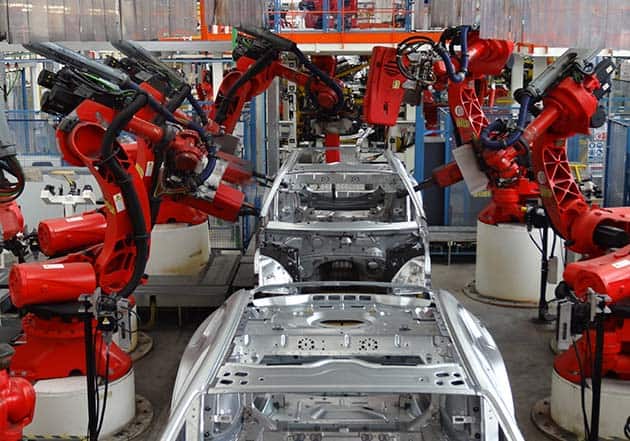 The way to deal with the threat to jobs from new technology is to build union power in the workplaces, argues Miro Sandev

Concerns about new technology and the unemployment associated with it are almost as old as capitalism itself, as the example of the Luddites sabotaging the introduction of weaving machines in the UK in the 1800s shows.

The technological revolution that was unleashed from the 1970s with the growth of personal computers and later the Internet has made some of these concerns more severe, as computers and robots take on an ever-greater share of tasks previously done by workers.

In many countries workers are going backwards in their standard of living, fuelling anger over inequality. The automation of routine tasks, the application of machine learning and the rise of robot production threaten to make matters worse.

Union leaders have warned that the introduction of self-driving trucks and cars could eliminate millions of jobs. For example, in the US there are about 3.5 million truck drivers, forming the largest job category in 29 states.

Other estimates paint an even bleaker picture of potential job losses. Forty per cent of US employees are in occupations where at least half their time is spent doing tasks that could be automated by adapting technology already available, according to research from McKinsey Global Institute.

These include the three biggest occupations in the country: retail sales, store cashiers and preparing and serving food, totalling over ten million people. But are the doomsday scenarios realistic?

Firstly, just because it is technologically feasible to replace a set of human tasks with work done by a robot, doesn’t mean that it is cost effective for a company to do it. Installing new technology has to be cheaper than employing the workers it replaces. And there is still a lot of cheap labour in the world—which is why many existing labour-saving technologies are not being implemented.

And job losses may be offset by the growth of jobs in new sectors. A study by accounting firm Deloitte based on 140 years of UK census data concluded that technological innovation had created more jobs than it had destroyed. The dominant trend was of shrinking employment in agriculture and manufacturing, being offset by growth in the care work, creative, technology and business services sectors.

The study points to the large increases in the numbers of bar staff and hairdressers over the last 50 years as evidence that when one sector enters a decline, opportunities open up for workers in other sectors.

But the obvious response to this is that the wages paid in hospitality and hairdressing industries are much lower than the skilled manufacturing jobs that have been destroyed.

Another point the study makes is that technology has boosted jobs in knowledge-intensive sectors, using the example of accountancy where there has been an eight-fold increase in the percentage of the workforce who do that job. However, this is a bad example, as accountants are one of the most likely professions to be automated in the near future according to the McKinsey study.

Automation has been used in the process of capitalist re-structuring since the 1970s to decimate well-paid unionised workforces and push workers into non-union jobs and industries that are paid less and often casualised.

This is because the control of new technology remains in the hands of the CEOs of the major corporations and the tiny super-rich minority that own them—the class that controls production. When new technology is implemented—and for whose benefit—is determined by these class relations.

This means that automation almost never leads to the creation of jobs that are as well paid or better paid than the jobs lost because of it.

Cost effectiveness isn’t the only reason why capitalists might wish to automate production. As Marx wrote: “it would be possible to write quite a history of the inventions made since 1830, for the sole purpose of supplying capital with weapons against the revolts of the working class.”

One of the main reasons for automation is to give managers greater control over production. This desire for control is driven by the desire to extract greater productivity from workers and hence higher profits. Their preferred tactics for such control include detailed division of labour, simplification of work tasks and deskilling of workers, all of which fit in with increased automation.

The other reason why managers want to increase their control is to weaken trade union organisation. So bosses are constantly searching for ways to deprive workers and their unions of any control they may have over the organisation of work, and to devalue workers’ knowledge of the job.

Strong union organisation generally means higher wages, which limits the level of exploitation, and can also lead to union control over allocation of work and hiring. The best organised unions are able to build up the power in the workplace to decide who gets work on a job, how the work is divided up, who gets overtime and so on. Some of this control is still retained in Port Botany in Sydney by the Maritime Union (MUA), which is currently in a dispute with the port operator Patrick Stevedores, owned by Asciano.

As Asciano company boss John Mullen told the financial press: “Five years ago the union decided who worked what shift, the union allocated overtime, the union picked the members that worked the emergency shifts that earn triple time.”

Automation can be used as part of a union-busting exercise, to make union members forcibly redundant and then reintroduce more non-union workers later down the track. Increasing pressure on the workforce through the threat of redundancy is another reason for introducing automation. The Asciano boss explains:

“Our terminal in Melbourne is not automated. It has a highly productive, motivated work force. Could we automate? We could. But the bang for the buck is not there. Port Botany is the opposite story. We have extremely difficult relationships with a militant arm of the union and so we have invested in automation.”

In response to job losses through automation, people from diverse political backgrounds have begun advocating a Universal Basic Income (UBI) as the solution.

Switzerland recently held a referendum on the idea (although it was overwhelmingly defeated) and there are small pilot programs planned in Finland, the Netherlands and Canada. Support for the proposal has come from the left, as well as libertarians and right-wingers. Milton Friedman famously proposed a version of it with his negative income tax.

The details of the proposals are as diverse as the people backing them. The more left-wing version suggests UBI be introduced on top of already existing unemployment and welfare payments.

The right-wing version puts it forward as a replacement of all other welfare payments, as a way of cutting the public sector administration of welfare and opening new areas to marketization. In either case every member of society, regardless of wealth, would be paid a certain amount of income without having to work.

But capitalism could never tolerate a UBI high enough that people would not have to work to have a decent life. That would require an enormous amount of taxation—for example the proposal in Switzerland would cost roughly one third of annual GDP.

It would also mean there was no compulsion on workers to take badly paid or stressful jobs and this would threaten capitalists’ ability to run production. It poses such a serious challenge to capitalism that winning it would effectively require a revolution.

UBI cannot be separated from the question of what attitude socialists should take toward automation, and some on the left like Alex Williams and Nick Srnicek, authors of Inventing the future: Post-capitalism and world without work, have even joined the two together in the slogan “demand full automation, demand UBI.” But this completely misses how reforms are won in the first place—by coordinated mass struggle in the workplace and on the streets.

Fight for the jobs

Workers are faced with the prospect of technologies like driverless trains and trucks which will reduce jobs. In response, we should demand no job losses and a reduction in the hours in a working week with no loss of pay.

The MUA is currently demanding a modest increase in the workforce at Port Botany in Sydney, after automation has destroyed hundreds of jobs, and the company is bitterly resisting it.

Socialists have to start by unequivocally fighting for well-paying, union controlled jobs and for full employment across the economy. Winning more jobs and more union power at work provides the working class with a powerful position from which to then fight for better pay and conditions, and a shorter working week.

In a socialist society where the economy was democratically controlled, technology could be used for the benefit of everyone to reduce working hours, eliminate drudgery, and allow people to have basic needs met without spending whole lives in alienating work.

But this requires a fight to take control of the economy off the capitalists and that fight can only be won from a position of strength in the workplace.