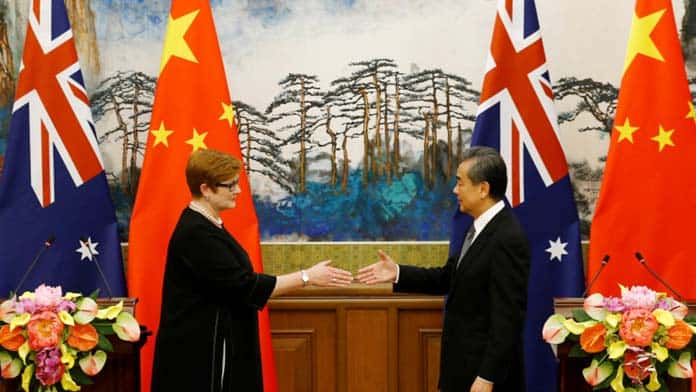 David Brophy’s new book China Panic outlines an alternative to the rising militarism and xenophobia around China. He spoke to Solidarity about how to understand the tensions

Why did you write China Panic?

I wrote the book to help Australians get their head around a complicated set of debates that China is provoking here to do with foreign policy and domestic policy. There’s been quite a noisy discussion but there hasn’t been enough of a critical perspective provided on these issues.

The China discussion in Australia tends to reflect either voices from the security policy world or corporate viewpoints. I don’t think either of them provide an adequate guide to the issue. So it was about trying to cut across that debate.

The conventional terms have been that people either talk about “engagement” which has been the name for the policy for the last 20 or 30 years, and that’s involved getting on with business with China. That has involved compromises and side-lining issues of domestic politics in China. We are in danger of flipping now to something that is equally, if not more, problematic—a security driven paranoia towards China.

The China discussion really impinges on any political question in Australia today, from foreign policy to questions of trade, to questions of security legislation domestically, to education and universities. I’ve been trying to respond to these issues in a piecemeal fashion but I thought it was necessary to collect all these thoughts in one place.

I think people can easily get disoriented when you are talking about China and the discussion shifts very quickly from say something to do with foreign investment policy to questions of human rights. People can get a bit bamboozled, particularly when you have a very strident, hawkish perspective that appears to have all the answers: China is the enemy and foreign and domestic policy just has to be organised around that principle.

What do you think Joe Biden’s focus on China means for Australia?

I think Biden has been quite reassuring to the China hawks in Australia. My analysis is that they were not particularly happy with the election of Trump because of his isolationist rhetoric at the beginning of his term. Now he ended it of course on very xenophobic, racist, belligerent notes. But I think there is still this sense that Biden is more capable of catalysing a global anti-China coalition. And that is certainly what Canberra hopes to see.

Biden at the same time is still vulnerable to the more Trumpist anti-China talking points and he’s taking steps to placate that camp as well. You can see that with questions like the inquiry into the origins of Covid-19 which he’s revived. I think there is a strong temptation for someone like Biden—in the absence of any strong reformist policy agenda—to rely on anti-China politics to fabricate a sense of national unity in the US.

Having said that, I think there are still doubts and hesitancy in Canberra as to whether Washington actually has the capacity to reassert its dominant position in relation to China. So I think that there are still strong incentives for politicians like Scott Morrison to lobby and continue to make noise against China, just to prevent Washington getting distracted and losing interest in Australia’s part of the world.

Why do you think the Australian government sees the rise of China as such a threat?

It is a nervous reaction to China’s growth and growing influence. Australia’s perfectly happy with China’s economic growth. There’s been a bonanza of profit taking in Australia over the last 20 years.

But the primary consequence that worries Australia is the possibility that America’s status in East Asia will be diminished, America will ultimately lose interest in maintaining primacy in this part of the world and Australia will be left without a powerful patron in the region; which is a situation that Australian elites have never had to face since colonisation.

Why is Australia so attached to this traditional configuration? I think it has a certain amount to do with the way that America has created a global system that is favourable to the economic interests of advanced, wealthy countries like Australia.

But it also has a lot to do with Australia’s own ambitions for a mini-empire in the Pacific. It sees itself as entitled to its own sphere of influence in the Pacific region that is much easier to maintain with the presence of a great power like America. That’s where Australia’s imperial interests clash directly with China.

Regardless of the outcome of the US-China rivalry, the potential for conflict in this region is going to remain and continue to drive the hawkish, militaristic policies that we are seeing at the moment.

What do you see as the problem with domestic Foreign Interference laws aimed at supposedly curtailing Chinese influence?

I think the laws go too far in criminalising things that shouldn’t be criminalised. Australia is a country where, apart from Indigenous Australians, we all belong to some kind of diaspora. So Australian politics is inherently international. People have all sorts of different relationships to the politics of different countries. Where that engagement crosses a line into physical violence or intimidation, we have laws against those kinds of things.

Foreign Interference legislation is written in such a broad way that it gives security agencies huge discretion to monitor and potentially prosecute people who are engaging in what I think should be normal, acceptable forms of political activity.

There is also the wider effect. The campaign to pass the laws involved hyperbolic rhetoric about foreign subversion, and the existence of these laws means that the security agencies have an incentive to find victims so as to justify the ongoing expansion of security powers in Australia. If you look at the way domestic security agencies are talking, it is clear that this concept of “foreign interference” is taking over as the driving justification for new security powers. Just as we have seen terrorism justify a deluge of new security legislation, we risk seeing something similar in the coming period in relation to so-called foreign interference.

What do you think is the alternative to China panic?

I think Australians need to reject this posture of seeking to escalate a US versus China rivalry so as to preserve the Australian-American dominance in the region. It is a dangerous path to follow. It is putting us at risk, it is leading to the militarisation of the region and an increase in nationalism and racism on all sides.

The goal instead should be to de-escalate rivalries like this, to defuse tensions, to form links with ordinary people and civil society groups across the region who share this perspective and can see that we all have an interest in standing up to repressive governments who are victimising minority populations or cracking down on democracy. But we also have an interest in combating dangerous warmongering. Those two things go hand in hand.

Australian troops no solution in the Solomons

Australia’s efforts in the Solomons are aimed at preventing rival powers from establishing a presence and to advance Australian imperialist interests.