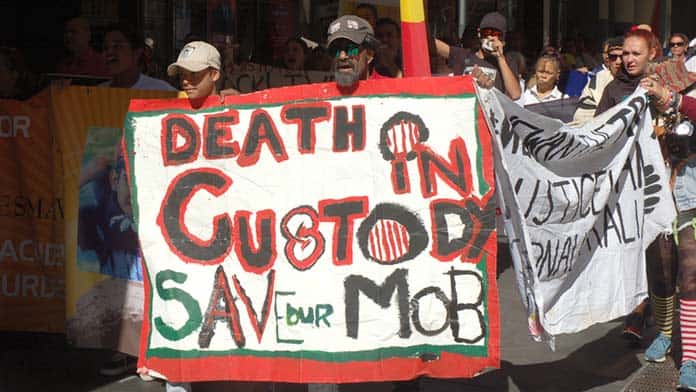 The police had come to arrest Stanley on outstanding charges but Pam says they never produced a warrant before the four officers barged into her house.

According to reports on National Indigenous Television (NITV), Pam was ordered out of the house by police and then heard four or five shots. She was not allowed back into the house.

Police claim Stanley was armed with a knife and an axe. But they have refused to confirm whether any bodycam footage exists to support their story that they shot in self-defence.

Stanley’s death has devastated his family and community.

Stanley’s brother Edward died in custody in Long Bay jail in 1999 and had suffered badly at the hands of the police.

They travelled from Walgett to Sydney in July 2020 to speak at a Black Lives Matter rally.

The Russells learned of Stanley’s death after seeing a report on the news and recognising Pam’s house.

In a statement to The Guardian they said: “We have already been to hell and back during the investigation into Edward’s very avoidable death in custody. Now we have to go through the same pain and trauma all over again.”

The Russells have also taken on care of many other Aboriginal children over the years.

As family friend Dr Roderic Pitty told NITV: “Two parents who have struggled for decades to try to help Aboriginal youth come out of the clutches of the criminal justice system, and they’ve lost their two biological sons to that system now.”

Stanley was the second Aboriginal person to die in custody in NSW in just three days.

On 7 November, Corrective Services said that a 26-year-old man had been found dead in his cell in Cessnock prison.

Perversely, his death was announced at the opening of a new multimillion-dollar wing built on the prison.

Just a fortnight before Stanley’s death, Aboriginal activists and supporters were rallying across the country to protest the acquittal of a WA police officer on trial for murder. The officer, whose name remains suppressed by the courts, shot dead Yamatji woman JC in 2019.

The last time a police officer was charged with murder in WA was following the Forrest River massacre in 1926. Back then, not a single Aboriginal person was on the jury and the officer walked free. The exact same thing has now happened in 2021.

JC’s sister Bernadette spoke to a rally outside the WA Parliament: “At the end of the day, white can shoot black and that’s not fair … we will march all over Australia for JC.”

Nyoongar woman and human rights lawyer Hannah McGlade told the rally: “This was an Aboriginal woman with a disability and a mental illness released from prison with no care and support … the McGowan government has invested $1.86 billion into increasing policing, what’s left for our women?”

JC was suffering mental distress and carrying a knife when she was shot. Officers on the scene knew she was unwell and were talking her down.

The situation changed when the acquitted officer pulled up in a car. Within 16 seconds JC had been shot.

The officer argued JC lunged towards him and he was acting in self-defence. But both CCTV footage and testimony from other officers shows there was never any lunge.

The same week as this acquittal, Channel 7 broadcast a disgraceful documentary defending Zachary Rolfe, the NT police officer currently on charges of murder for shooting Warlpiri man Mr Walker in Yuendumu in 2019.

The prime-time broadcast sought to justify the shooting death of an Aboriginal man in his grandmother’s house by a militarised police force. It drew on all the same racist stereotypes about violent and dysfunctional remote communities used to prepare the ground for the NT Intervention in 2007.

Rolfe was charged only due to mass protests in Central Australia and solidarity actions across the country. Only a mass movement on the streets stands any hope of winning justice from this racist system.