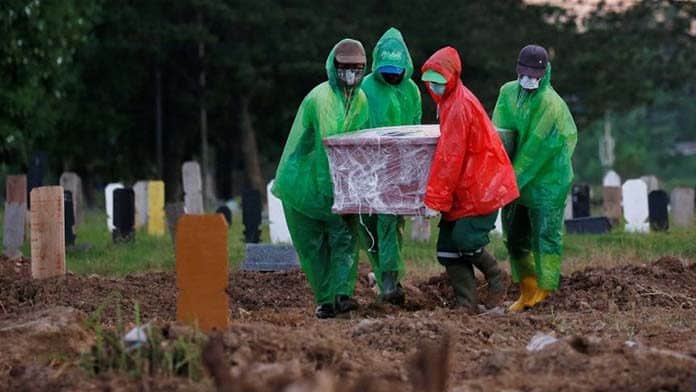 Indonesia now has over 1100 confirmed deaths from coronavirus, the highest in southeast Asia. Inadequate testing means the real figure is surely far higher, with 3000 more burials recorded than usual in Jakarta alone through to the end of April. Amnesty International says at least 38 doctors and 21 nurses have died, with a desperate lack of masks and protective gear for those treating virus patients. On Wednesday the number of new infections recorded hit a new peak of 689 cases.

Alang, a member of Unifikasi Sosialis (Socialist Unification) and the union Sentral Gerakan Buruh Nasional (National Labour Movement Centre) in Indonesia explains the impact of the coronavirus and the economic crisis it has triggered on workers.

Since the emergence of Covid-19, the Indonesian government has been unprepared in dealing with the crisis. There is now panic everywhere, and the poor, particularly the working class, are the ones most affected.

The number of positive cases continues to grow every day.

Testing is minimal, except in the big companies that are still operating. But many companies provide only self-made hand sanitiser upon entry to the workplace. It is difficult for ordinary people to access healthcare, and people are even asked to pay to get the Covid-19 test. The tests are only free at public hospitals and are not available at healthcare clinics.

The government policies to slow the spread of Covid-19 are actually highly discriminatory towards workers because not all workers can work from home, or are able to practice social distancing or comply with the social restrictions. Many workers are still working as usual, although several companies have stood down workers, with some workers only receiving 50 per cent of their usual wage, some 60 per cent, and others being paid nothing at all.

The Centre for Indonesian Policy Studies (CIPS) estimates the number of poor people in Indonesia has increased this year by 8.5 million because of the spread of Covid-19. Researcher Felippa Ann Amanta has stated that the Indonesian economy might only grow 2.1 per cent or even zero this year.1

The Manpower Ministry has recorded more than 100,000 companies affected by Covid-19. These companies have fired and stood down more than two million workers. Data from 16 April showed the number of companies in the formal sector firing or standing down workers reached 83,455. In the informal sector, it has been 114,340 companies.

But we know the government is under-reporting. Sometimes it is only when unions make a complaint that the government makes note of the workers affected. Many companies are firing workers without making any report to the government ministry.

Government policies have been of little benefit to workers, as factories and companies continue to operate without provision of PPE, despite the government’s circular on protecting workers. Worksites where workers have tested positive for Covid-19 continue to operate.

In addition, the government also issued the “Pre-Work Card” [a scheme to allow workers to get training] which is intended for workers made redundant. It has been criticised for being a waste of funds, has the potential for corruption and does nothing to solve the issues of Covid-19. People need to eat, they do not need more training, particularly at a time when companies are shut down.

As if that was not enough, the government then issued another circular on the Religious Holiday Allowance. This allows companies to delay or pay in instalments the [Ramadan] holiday bonus if they are having financial difficulties, even though the holiday bonus is a legal requirement. This policy is incredibly pro-business.

The labour movement in Indonesia continues to resist. Although activity has been minimal, one thing that the unions have done is to build solidarity so that the government cannot ignore their responsibility over the fate of Indonesian workers. Because of the laws against assembling, if there is a gathering of more than five people, police immediately break it up, even arresting people. On May Day this year when five to ten people gathered to raise a banner on the parliament building gate as a symbolic action, they were immediately forced to disband, and taken to the Athlete’s Village (the Covid-19 patient quarantine site).

Unionised workers are fortunate in that they can meet directly with the company to negotiate over the issues they are facing, but non-unionised workers face complicated problems. Unions have also joined with peasants to collect basic goods (such as rice) from villages to support workers that have been stood down or dismissed.

In the middle of Covid-19, the government is also still discussing the draft omnibus law on Job Creation and other problematic draft laws, when it should be focusing on how to handle Covid-19. This would increase use of outsourcing and exempt some business from paying the minimum wage. They are taking advantage of the situation of a narrowing democracy and the prohibition on holding rallies to attack workers’ rights.