‘People should be taken through the journey and educated about vaccination’ 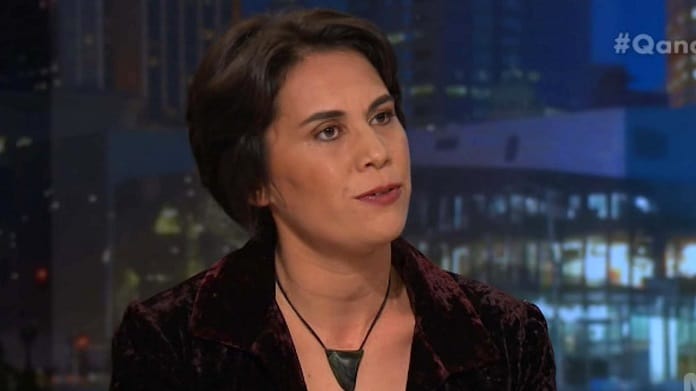 Celeste Liddle is an Arrente woman, a union activist, social commentator and The Greens candidate for the federal seat of Cooper in Melbourne. She spoke to David Glanz for Solidarity’s podcast The Sound of Solidarity recently. Below is a part of that interview.

You wrote recently on Twitter: “I’ve said consistently that policing the crisis is not the way to go. You don’t want fear and ignorance to spread? Then don’t make it your default way of dealing with the crisis. Don’t lock down towers, don’t fine human rights activists.” What was your thinking behind that?

During the second wave in Victoria, we had measures brought in that were really questionable. And I saw people on the left cheering for these in ways that I found problematic. When they were locking down postcodes, for example, a lot of those were working class areas that were quite multicultural and had high Indigenous populations.

The virus was spreading through these communities because people were in insecure work. They don’t have any real safety net to fall back on. If they don’t do a shift, they don’t get paid.

Then they locked down the public housing towers full of new migrants, particularly refugees; long-term unemployed; people with addictions. And they stationed police officers at every level of those towers to ensure that people didn’t leave their rooms. To me, that was a gross abuse of policing powers.

Information about COVID and keeping safe was only distributed in English. It was left to migrant activist groups to translate this material so that people could access the information.

A year down the track, some of these measures are back again, despite them already being disproven, and we’ve still got cheerleaders not questioning them. And I find that really dangerous.

Another tweet, you posted even more recently is: “I am still completely unsupportive of this Victorian Government continually escalating policing powers and cops firing assault weaponry at protesters.” Take us through your thinking on that one.

The Andrews government is very fond of policing and has been escalating police powers prior to COVID. A couple of years ago now the special ops police got access to an arsenal of new assault weaponry. I’ve been to a variety of different protest actions in the city and I’ve been told by police liaison officers that it is actually the default now for these officers to attend.

At the anti-lockdown protests we were seeing them discharge assault weapons, everything from pepper pellets, rubber pellets to capsicum spray. There were lefties cheering on these sorts of measures and the right to shoot these weapons at people that they didn’t like. But it hadn’t occurred to them that police officers turn up to other rallies with the same weapons.

And now they’ve just been given a free pass by a section of the community and by the state government to utilise them wherever they feel it’s appropriate. That’s terrifying.

I don’t have a lot of faith that the state government is going to wind back increased policing powers that they’ve brought in during this time. Because history prior to the pandemic shows that [Premier Dan] Andrews is very keen on increasing policing powers.

Vaccinations are clearly safe and effective. And we want as many people as possible to be vaccinated. But having said that, the construction unions, the AMWU, the RTBU have all come out and said they are absolutely for vaccination, but they’re against vaccine mandates, and that they’re counterproductive and that they push people in the wrong direction. What’s your view on that?

I think that people should be taken through the journey and should be educated about vaccination. The unions have an incredibly important role to play within that.

COVID is a work health and safety issue. Ensuring people have the right information is incredibly important when there is such a misinformation campaign, and I believe that our governments have allowed that to happen, particularly with regards to AstraZeneca and the likelihood of blood clots.

I think a lot of the members within the CFMEU were feeling a bit under siege, they’d already taken action because tea rooms had been shut down because construction was representing 13 per cent of the COVID cases in Victoria.

When they’re already feeling under siege, and anti-vaxxer and far right groups are looking to spread misinformation and to organise, it creates a perfect storm. So I’m not surprised that some within these industries have been engaged in these kinds of rallies.

Not enough work has been done to ensure that people are educated on the vaccines and on the collective responsibility of community safety, particularly when a lot of the COVID response in this state has been to police the crisis rather than to inform the public and ensure that the best information is out there.

I think it has. They could be rolling out COVID vaccines for those who choose to take them on the sites and lobbying for pay for those who feel side effects. But instead it’s just this hardline rule by the government. And when you’ve already got a workplace that’s feeling under siege, and lockdowns now for nearly 240 days, people feel quite distressed and on edge.

It’s created an environment where a group of people are feeling picked on by the government and therefore exploitable by people peddling misinformation.

We are potentially only a couple of weeks away from union members being sacked for not being vaccinated. How do you think the union movement should respond?

I work for a white-collar union, I know there’s some within even this highly educated group who are resistant to the vaccine. Unions have a responsibility to start educating and doing outreach to members as much as possible. And we need to ensure that workplaces are safe.

We are going to see continual misinformation campaigns play out. I’ve seen vaccine hesitancy within Indigenous waterfront workers all along the coast and have been trying to personally rebuff that. But when there’s an unacknowledged history in Australia, of things like lock hospitals, where Indigenous people were taken in order to remove them from their lands under the guise of having some sort of a disease, you can understand why there is mistrust.

Changing that is as simple as pointing out that an Indigenous community like Wilcannia has been completely neglected by the government, to the point where COVID has just ripped through that community. If the vaccines really were more harmful than the disease itself, I don’t think Indigenous people would be so neglected in the rollout.

One of my friends who is a photo-journalist was noting that there were about 5000 people taking to the street, and they’re not just white fascists, they were people of all sorts of colours and creeds.

I think that a lot of opportunities to talk about ensuring people have secure jobs, and access to excellent public health care and decent unemployment benefits if they do lose their jobs through this pandemic, has been missed. And this is why we’ve seen a growth in these sorts of events. A lot of people are feeling really distressed right now and the only way we’re going to cure that is with stronger social approaches.

Hear the full conversation below.