Olympics fuel nationalism that distracts from our real problems 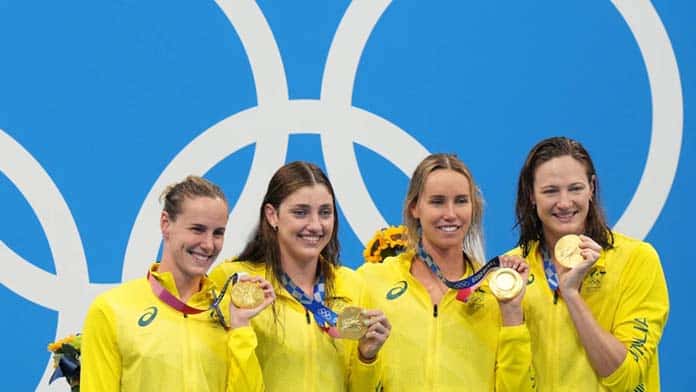 In the leadup to the Tokyo Olympic Games, political leaders all over the world reassured the public that the Olympics were a valuable opportunity to reconnect the world through sport.

But as the Games wrap up, it is clearer than ever that they have represented a very expensive insult to public health for the Japanese people.

In Tokyo, COVID cases have surged during the 17 days of the games. On 20 July the number of new daily cases in Tokyo rose past 1000, with now over 5000 new cases per day. The vaccine rollout in Japan continues to lag, with just over 30 per cent of the nation fully vaccinated, and vaccine supplies running low.

In spite of this, the government has spent over $20 billion on the Olympics going ahead. This is estimated to roughly equal the cost of building 300 new hospitals in Japan.

The Olympics draws massive profits for broadcasters and corporate sponsors. US advertising revenue this year is predicted to reach about $3 billion.

But for the ruling class, the Olympics is about more than just profit. Throughout the 125-year history of the modern Olympic games, sport has been used to bolster nationalism, encouraging people to “rally around the flag” amid war, austerity, and now a health crisis.

Instead of simply celebrating human achievement, the wall-to-wall coverage focuses on “our team” with celebrations at every gold medal for Australia. The Daily Telegraph boasted that “Australia’s Tokyo tally of 17 gold medals equals the previous high mark achieved in Athens 2004”.

Scott Morrison wasted no time trying to cash in, declaring that the public needed to emulate our national success in Tokyo and “make a gold medal run” in driving up rates of vaccination.

For decades, the Olympics has seen governments spending billions of dollars of public money on stadiums while people go without basic needs.

But the Olympics also carries a parallel history of resistance, sparking movements of working class people calling for economic justice, and athletes themselves standing up against racism and sexism.

Resistance to the Tokyo Olympics

For months, Japanese people have protested against the Games both in the streets and online. Signs at protests read “No Olympics – use that money for COVID-19” and “Olympics kill the poor”.

One activist, Karoi Todo, told AAP, “We are not only protesting the Olympics, we are opposing the government overall—this is ignoring human rights and our right to life. Infections are increasing. To do the Olympics is unforgivable.”

Nurses were called to assist with the games and took to social media to voice opposition, with one nurse writing “we are not disposable pawns”.

Anger has also been directed at the notoriously profit-hungry International Olympic Committee (IOC). When the IOC president Thomas Bach arrived in Tokyo, his visit to the Hiroshima memorial was met with protests. A Hiroshima community group declared that it dishonoured the victims of the atomic bomb.

Japanese activists have also expressed anger about the broader impacts of the Games, including the destruction of public housing in Kasumigaoka to make way for a stadium, and new anti-terrorism initiatives that increased police powers.

What has happened in Japan is consistent with the history of the Olympic Games.

The 2016 Rio Olympics cost $19 billion and deepened an ongoing housing crisis. Homeless people were transported to shelters 50 miles away from the city, and tens of thousands of people were forcibly moved out of favelas in order to build stadiums and “clean up” the city’s image. Similar impacts on housing have been a defining feature of the Olympics in London in 2012, Beijing in 2008, Athens in 2004, Sydney in 2000 and countless more.

These impacts are a symptom of host countries using the Olympics to push nationalist ideas and declare their power on the world stage.

As the world has seen war and crisis, the ceremony and nationalism of the Olympics has become more pronounced. At the 1932 Los Angeles Olympics, in the middle of the Great Depression, the medals ceremony was introduced, with a tiered podium and the flag of the gold medallist being raised to the sound of the national anthem.

The Olympics Games have been presented as non-political, bringing countries together to celebrate sport and international peace and unity. In reality, this means crackdowns on protest, both from local people and athletes.

A particularly brutal example is the games in 1968 in Mexico City. Ten days before the games, Mexican people protested peacefully against the games as a waste of money, and the Mexican army responded by killing 260 people and injuring some 1200 others.

That same year athletes Tommie Smith and John Carlos raised their fists in a Black Power salute on the podium while the American National anthem played, and were subsequently sent home, with deliberate efforts made to write them out of Olympic history. A spokesman for the IOC said Smith and Carlos’s actions were, “a deliberate and violent breach of the fundamental principles of the Olympic spirit.”

Sport is important to people because it presents opportunities for recreation, excitement and connection. It offers us a taste of things that work under capitalism denies ordinary people, like the ability to use our bodies in creative and spontaneous ways, rather than for the bosses’ profits. The sense of teamship and collective identity offered by sport is a welcome relief from the alienation of capitalism.

But supporting a club or supporting your nation can also serve to paper over class divisions, and distort ideas about who our real enemies are. The ruling class values this. In the Olympics, gold medal tallies are pushed as a point of national pride, while poverty and suffering are swept under the rug.

The Tokyo Olympics going ahead in the midst of COVID crisis is a particularly stark demonstration of this. The Sydney Morning Herald even editorialised that, “a distraction from the fear and heartache in the wider world has been more necessary than ever”.

But the legacy of resistance tied to the Olympics, and the resistance in Tokyo this year, shows that the medals ceremonies and the national anthems do not do enough to conceal the contradictions of capitalism.

To fight for global public health amid the COVID crisis, we must look beyond the green and gold and see our greater potential for connection in struggle.

Pressure cooker valve: the AFL and the business of sport

All aspects of life have been disrupted by COVID-19, including entertainment—from live music, cinema and the arts to the deep-rooted popular football codes, Australian...

World Cup of fraud—FIFA corrupt to the core

What many suspected for years has now been conclusively proven: the world football governing body FIFA is run by an elite implicated in a web of bribery, fraud, money laundering and even gun-running. The competition to win World Cup rights and broadcasting deals has turned FIFA into a lucrative business for corrupt officials.

Drugs in sport all part of competitive game

Sport in Australia is in crisis. And it is a crisis of its own making. Everywhere you look sporting codes and athletes are in...