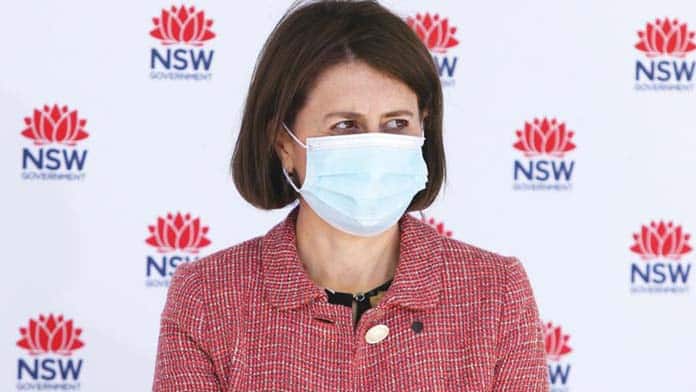 The NSW government has released a “roadmap to freedom” for when the state reaches the 70 per cent “double-dose” COVID vaccination target, projected for mid-October, announcing significant plans to reopen the hospitality industry in particular.

Modelling shows that the growing crisis in hospitals and ICUs across the state is set to peak at exactly the same time in mid-October.

The Australian has reported that NSW Chief Health Officer Kerry Chant initially argued for an 80-85 per cent vaccination target before reopening.

A higher target is quite achievable and would be a safer timetable that would provide more relief for hospital staff and slow any increase in cases.

And it needs to come with the determined effort needed to ensure high vaccination rates among vulnerable and marginalised communities, such as Indigenous people in regional NSW.

Any reopening should not mean a return to business as usual.

There needs to be a massive improvement in workplace safety, for instance through rolling out rapid antigen testing and ventilation checks and improvements. Bosses cannot be trusted to put workers safety first.

It is criminal, when they know the hospital system faces disaster, that the government continues to deny demands from unions for higher funding and improved staff to patient ratios.

Instead Berejiklian’s plan continues with the NSW government’s strategy of keeping tight police controls over ordinary workers and social life, while creating maximum “freedom” for commerce and industry.

Indoor theatres will be able to welcome large crowds of people who are double vaccinated, operating at 75 per cent capacity, and so will retail shopping centres.

But outdoor gatherings, which NSW Health have consistently insisted are low-risk, will continue to be capped at 20 people, under similar orders that were used to break up street protests for much of 2020.

Chant herself emphasises that the roadmap is “cautious”, with NSW Health retaining the capacity to keep particular suburbs and LGAs in lockdown if case numbers remain high.

The plan for schools to reopen in October, for example, is predicated upon LGAs having COVID caseloads far below their current levels.

The current police and military regime enforced on western Sydney is intolerable and must end.

The lockdown has seen huge resources wasted on demonisation and punishment of workers and multicultural communities, while failing to deal with many of the causes of continued COVID transmission.

Rather than stay at home orders that give police powers to stop people in the street, demand to know what they are doing and issue fines, we need a mass mobilisation of health and social support, including urgent increases to Centrelink payments.

This would help keep communities safely connected and looked after while they minimise social contact and many remain out of work.

Overwhelmingly, workers in the “LGAs of concern” have had to continue working through lockdown. Safety shortcuts and a lack of workplace rights are helping drive continued COVID transmission across Sydney, with subsequent spread through families when workers return home.

Union action can play a crucial role in fighting for safety at work. UWU members in a number of warehouses, for example, have led walk-offs when employers have put people at risk by breaching COVID safety plans or failing to disclose positive cases.

If the NSW government was serious about driving down transmission they could mandate N95 masks in workplaces, set and enforce minimum ventilation standards and properly monitor and enforce COVID safety plans, including through empowering union health and safety representatives.

In Victoria, plans for returning to school involve a huge audit of ventilation and commitments to invest in building modifications and air-filters, but we have not seen similar commitments in NSW.

Many workplaces still don’t have paid vaccination leave and too many workers still face loss of income or leave entitlements if they stay home when symptomatic or after testing, although a union campaign has forced the state government to begrudgingly extend the inadequate $320 test and isolate the payment to the entire state.

Pandemic of the unvaccinated

A number of countries across Europe currently have close to 80 per cent of their populations vaccinated and are relaxing restrictions without any surge in deaths. Australia could already be in this position too if all levels of government had not systematically bungled the vaccine roll-out.

There are warnings, however, from countries such as Israel, the United States and the UK, which have experienced new COVID waves upon reopening after they dropped all other restrictions, as the virus rips through unvaccinated sections of the population.

The current outbreaks in NSW and Victoria too are primarily concentrated among unvaccinated people, with the fully vaccinated making up a tiny proportion of those suffering serious illness and death.

This both proves both the effectiveness of current vaccines and also the serious dangers facing sections of the population where vaccination rates are lowest.

Rates among Indigenous people in NSW are a complete disgrace, with only 25 per cent at full vaccination, compared with more than 40 per cent of the non-Indigenous population. Many Aboriginal health services have reported real struggles securing vaccine supply, despite servicing a supposedly “priority” group.

All three deaths in the Western NSW outbreak are Indigenous people. ABC News are reporting one family group alone has more than 40 people infected.

Ngemba Elder Phil Sullivan, from Bourke, told the ABC that there had been a systematic failure of government to prepare for the outbreak, but that, “empowering people in communities and giving them the resources to look after their people” was crucial both in terms of surviving through social distancing and boosting vaccination.

The Dharriwaa Elders Group in Walgett is calling for an end to the regime of fines, keeping people out of prison and a huge boost to housing and social support services, including nurses to assist Aboriginal health services vaccination.

Much more needs to be done to ensure higher rates of vaccination, and we need to fight to demand a permanent increase to health spending and hospital staff, and all necessary measures to ensure workplace safety as part of any reopening.