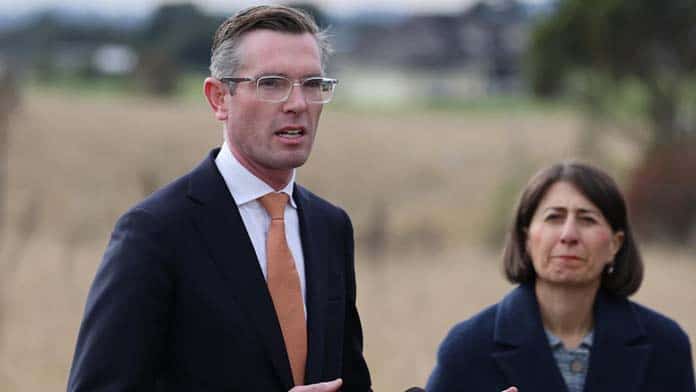 Dominic Perrottet’s installation comes after the so-called “moderate” faction in the NSW Liberals cut a deal to give him the job.

Gladys Berejiklian announced her resignation following news that the Independent Commission against Corruption (ICAC) was investigating her over millions of dollars in grants potentially awarded to benefit her former partner Daryl Maguire.

The mainstream media and senior business figures have mourned her departure. The Sydney Morning Herald called her “a highly accomplished and brave Premier”, while corporate big-wigs laughably put their weight behind a change.org petition to reinstate her.

But we shouldn’t shed any tears. Berejiklian continued the Liberal Party’s agenda in NSW. As Treasurer she oversaw the privatisation of the power industry, before privatising bus services and toll road WestConnex while Premier. TAFE has been gutted, with the Scone campus sold off earlier this year and a $90 million target for further sales of school and TAFE campuses imposed.

After praising health workers, teachers and public servants for their frontline roles when the COVID crisis began last year, she imposed a one-year wage freeze, with workers getting just a 0.3 per cent pay rise after a decision by the Industrial Relations Commission.

She has left the ambulance service and hospitals underfunded and operating at their limit, meaning they now face massive strain due to the pandemic.

As the Delta outbreak spread across Sydney, Berejiklian sent in hundreds of police and the army to impose discriminatory lockdown restrictions across working class and migrant areas of western Sydney. Cops were let off the leash with 28,000 COVID fines imposed in July and August alone, around 13 times as many as for the whole of last year.

Having a woman as Liberal leader has done nothing to take forward the fight against sexism. We have seen before that having female Prime Ministers, Cabinet Ministers and Premiers does not lead to real change—least of all through the Liberal Party.

When a private member’s bill was passed to decriminalise abortion, Berejkilian pandered to the right of her party, delaying the vote and saying she would support another version of “Zoe’s law”, recognising harm to a foetus as a criminal offence, as a trade off.

The news of the ICAC investigation was no shock. Berejiklian faced questioning at ICAC late last year on whether she assisted disgraced former MP Daryl Maguire in his corrupt dealings.

Maguire has admitted to using his parliamentary office to run a cash for visas scheme, as well as seeking access to Ministers on behalf of property developers where he had a personal interest. He even gave out the Premier’s personal email to business contacts.

Berejiklian has claimed to know nothing of Maguire’s corrupt dealings, but intercepted phone calls and text messages show that she is either lying or turned a blind eye.

She has tried to blame ICAC for the timing of their announcement in the middle of the pandemic. But it was Berejiklian herself who made the decision to resign before the ICAC investigation is finished.

Her replacement, Dominic Perrottet, voted against decriminalising abortion in 2019, opposes equal marriage and has attacked trans rights by mocking what he calls “pronoun police”. Perrottet is a conservative Catholic on the right of the Liberal Party.

He is a neo-liberal small government zealot, who has complained that Scott Morrison won’t consider increasing or broadening the GST. In 2015 he praised Tony Abbott for what he called his “measured response” to climate change and described climate spending programs as “gratuitous waste”. In another speech he blamed welfare spending for undermining the family by subsidising single parent households.

In a widely circulated Facebook post, he responded to Donald Trump’s election in 2016 by saying it was time for a “conservative spring” and declaring:

Perrottet will be the Liberals’ fourth Premier since they took power in 2011. He now faces three by-elections following the additional resignations of Nationals leader John Barilaro and Minister Andrew Constance. The next state election is still a year and a half away.

Perrottet’s biggest asset is the weakness of NSW Labor, which is still yet to recover from the legacy of its own privatisation and corruption when last in power. Labor has recently changed its leader, with Chris Minns replacing Jody McKay in June.

After pay cuts and going above and beyond through the pandemic, nurses and teachers are both planning industrial action to fight for conditions and better staffing in hospitals and schools.

Too often the public sector unions have backed away from a serious fight against the NSW Liberals. After the two difficult years of the pandemic, forcing change in NSW is going to require strike action and getting protest back on the streets.